was elected “Multihull of The Year” at the International Boat Show in La Grande Motte. For the first time, the boat was selected directly by the almost 10,000 visitors of the boat show who had the opportunity to see it in water. I could not therefore fail to visit the trimaran that, however, deeply let me down. In the following lines, I’ll tell you why.

This boat is built in La Rochelle by Neel Trimarans, a shipyard that, founded in 2009, exclusively builds trimarans from 47 to 65 feet. The company is still run by its founder, Eric Bruneel, former designer for the Fountaine-Pajot trimaran manufacturer.

Bruneel is a sailor, he has build a racing trimaran, the Trilogic, and he has already won an Ostar and a Fastnet competition. After these experiences, Bruneel has dedicated himself to the attempt to combine performance and comfort on board his cruising trimarans.

My visit started from the stern and, more precisely, from the cockpit. On a 9-meter boat, one might expect to find a huge cockpit, like on a maxi yacht. Here, instead, the cockpit is very, very small.

The original idea of Neel was indeed to create the so-called “cocksaloon”, that is the union of dinette and cockpit. This solution, with the master cabin positioned on the same level than the dinette, results into a small cockpit and a compact dinette. The only clear advantage is the possibility to seat 12 guests around the table only when weather is fine since, when weather worsens, the two spaces are divided by the salon glass door.

The only large zone of the boat is represented by the galley, equipped with two 192-liter refrigerators. On the opposite site, there’s a large chart table, the only other big element of this boat.

Coachroof windows are huge but with very small sky lights. Instead of wide sky lights, the shipyard has chosen these small long sky lights and I really wonder how air circulation will be guaranteed.

During my visit in the dinette,

I also saw the master cabin; placed transversely, it wastes a lot of space. This environment, which steals a lot of space to the whole main deck, hosts a bed which looks like a box, not to use another term. The bed is long – 1.95 meters – and the bathroom is quite comfortable. Uncomfortable, however, is the position of the cabin: if the owner decided to go sleeping early at night, he would inevitably “suffer” the chat of the other passengers seating in the cockpit or in the dinette.

Instead of the cabin, I would have preferred a large dinette; after all, I repeat, the boat is 9 meters long and boasts a total surface of 90 square meters! In other words, designers could have replicated the dinette of a 50-meter motor yachts that would have allowed to enjoy the boat throughout the year.

I visited the other cabins, starting from the central hull, where I found a sort of “well” just behind the galley, accessible from a ladder leading to this cabin.

This is a conventional very dark double cabin. I didn’t like the bathroom at all since, located behind the cabin and towards the stern, it is spacious yet windowless. There is no openings of any sort.

I even tried to simulate a shower but the sense of claustrophobia is really annoying and, if used while sailing, this shower will certainly trouble our sense of balance. Moreover, I really don’t understand how air and condensation can go out of there; considering the position of the compartment, it will be really hard.

The other cabins are positioned in the side hulls. I squeezed into the entrance of the hull which, as narrow as a Soviet submarine class Victor, put me really in trouble. Finally, I got the guest hull. The corridor is really narrow and lead to the cabin, in the stern, and to the bathroom, in the bow.

The cabin features a well-sized bed with no walk-around spaces: a really unthinkable thing for a 51-footer!

The bathrooms are full-length, the washbasin is small and minimal. The bow accommodates the shower compartment and an en-suite wc, which is a solution more suitable for a racing 40-footer and not for a three-hull 51-footer like this.

I went out of one hull and I noticed a wide opening; so, I squeezed into it to find out what was there.

This was the only zone I liked: the engine room.

This area benefits from a total surface of 18 square meters, an appreciable headroom, a convenient corridor and easy access to all tools, including electric and hydraulic systems, the engine, rudder axis and jacks.

I went out of the engine room and I continued my visit. In the stern, I noticed the tender location: just a saddle where to place the RIB. In my opinion, this position might make launching operations quite difficult, especially if we consider that the only one “mechanical” help comes from a small crane.

On such a big boat (16 x 9 meters), I would like at least a 3.50-meter tender fitted with a 20hp outboard but, here, it is really hard to imagine one, especially if we have to steer the boat in harsh conditions and rough sea.

On the starboard hull raises the only one coachroof available. The bimini that protects it is not attractive. However, the area is equipped with three winches and all rigging are within the helmsman’s reach.

But there’s a problem: maneuvers in the port. In the bow, you can’t see anything, the coachroof is to big that view is seriously compromised, especially on the port hull. The only solution is to have a radio and a crew member in the bow.

In the middle of the flybridge, there’s a small sun pad. In this case, too, something wider could have been designed. More specifically, the sun pad is obstructed by the boom that forces passengers to go under it

to get from one side to the the other of the sun mats, which is not easy. 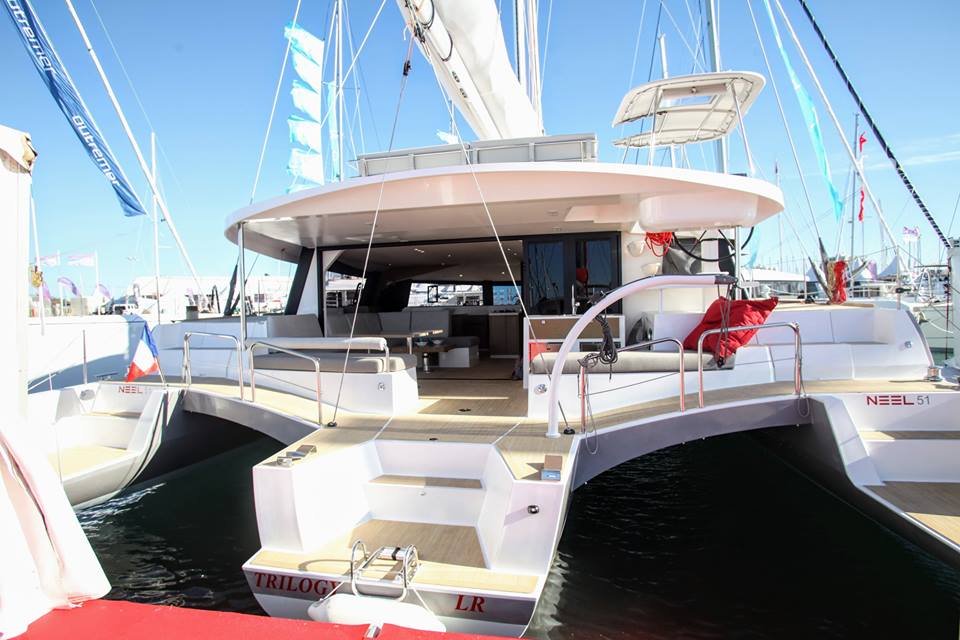 Forward, side-decks are wide and you can get the hulls with no problem. The forward section is minimal and inadequately equipped to enjoy stops at the anchor.

The whole area doesn’t seem to be very safe, especially when sailing with children. There aren’t any stays or pulpits, even the hull stays are short and, considering that the Neel 51 sails very fast, the bow is certainly not the best place where to enjoy navigation.

On the other hand, the sail plan of the Neel 51 is very rich. Standard equipment includes a furling 74.5-square-meter genoa and a 30-square-meter self-tacking staysail/jib. Carbon mast and Hydranet sails are, instead, optional. 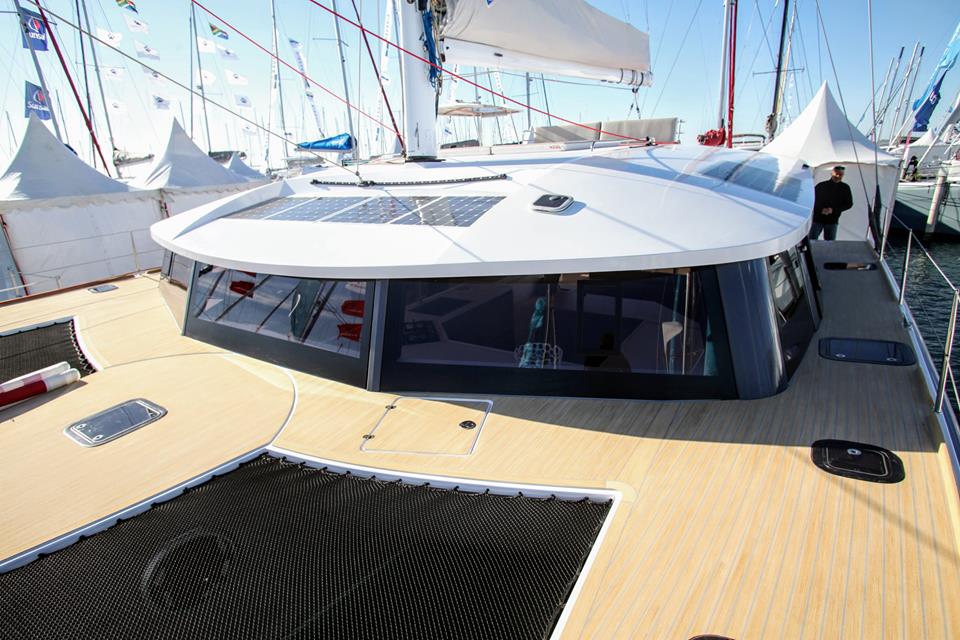 The Neel also features a 18 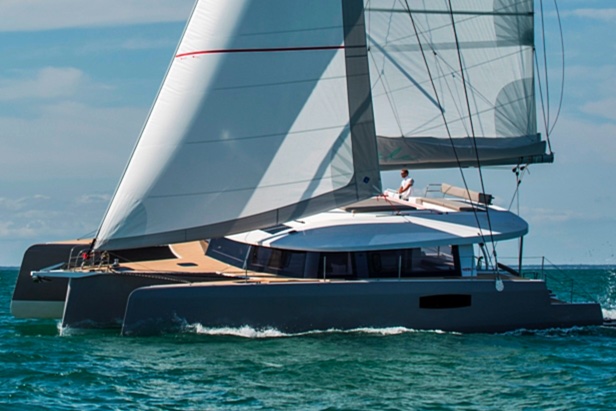 I also have some reservations with regard to motorization since the boat is fitted with only one 75hp engine.

The consecration of the Neel 51 as “Multihull of the Year” has surprised us a little because this boat has many flaws in terms of spaces and comfort. Despite her sporty attractive lines, we didn’t liked the Neel 51 at all.

Ranieri International and Honda Marine set out together to conquer Europe