Sacs Rebel 47: at 50 knots with the new outboard version

Sacs Rebel 47 Outboard: the best of a cruiser in a sporty Maxi Rib

It’s nine in the morning on a mid-September 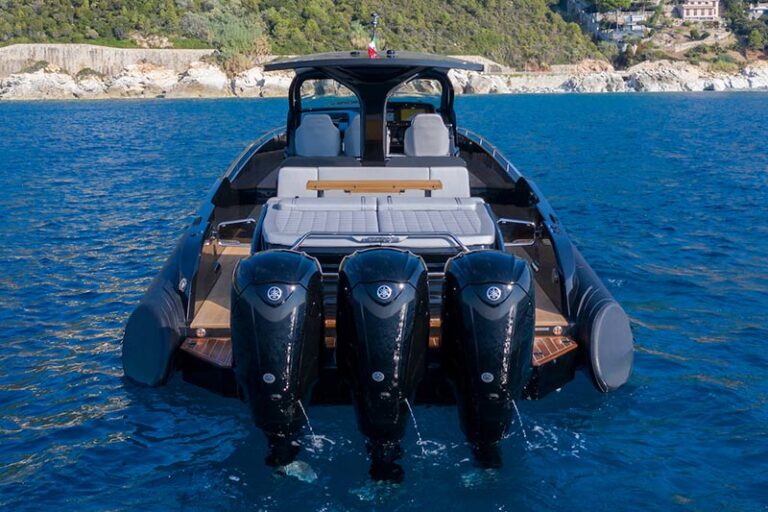 day and, as soon as we reach the Sacs Marine’s booth carefully set up along the main dock of the Marina di Varazze, we have the distinct feeling that what will rise will be not only temperature but also adrenaline.

After all, when facing a fleet of Sacs boats, all lined up at their starting blocks, the desire to test one becomes irresistible and our eye inevitably falls on the generous shapes of the Rebel 47 Outboard which, powered by three Yamaha XTO 425 shielding the huge aft sundeck, seems to want to set the record straight: if you want to climb on board, let me see what you are capable of.

Without hesitation, we climb on board this strikingly rebel (as the name itself suggests), elegant and gritty Sacs, capable – as we will see later – of combining the best of a Maxi Rib with the most sophisticated features of a traditional boat. While the sterdrive model we tested four years ago had already impressed us, we’re sure that the brand-new outboard version, scheduled to have its official debut at the upcoming Genoa International Boat Show, will definitively conquer us. 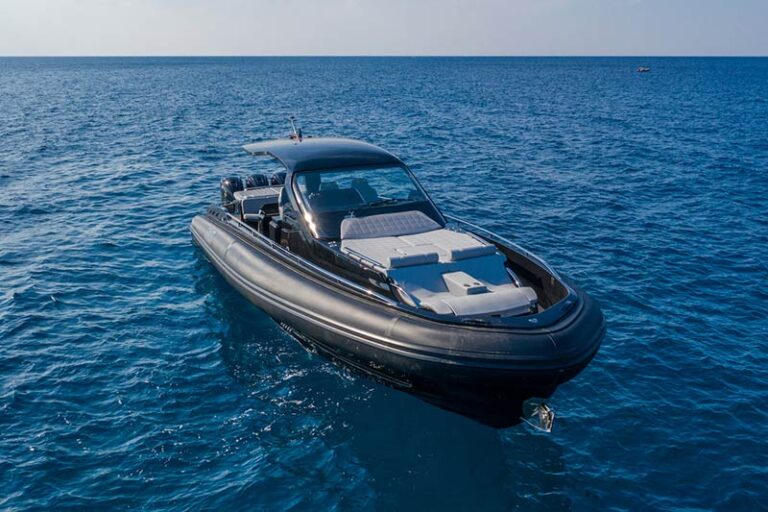 Exteriors: a surplus of spaces and comfort, in total safety 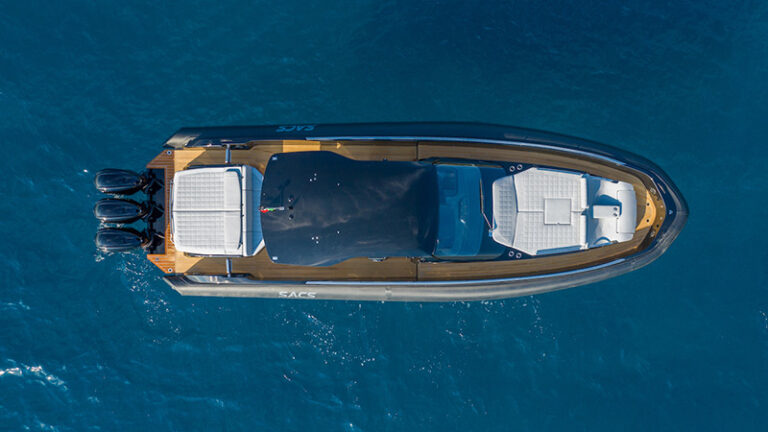 The first impression you get when climbing on board the Rebel 47 is purely dimensional.

The oversized aft sundeck is just the premise of an excess of large, comfortable and functional spaces that expand from the sundeck to the lower deck and further: by raising the benches, the teak decking compartments and the sundeck itself unveil some large and deep lockers, with an incredible storage capacity.

The cockpit is an open-air lounge: two comfortable sofas facing each other invite the passenger to seat in front of an extendable table, while, behind, the Yamaha trio emits its first roars: the Rebel 47 has just put the bow out of the port and we walk towards the cockpit to draw up our speed and consumption chart.

The steering console protected by a sturdy hard-top with 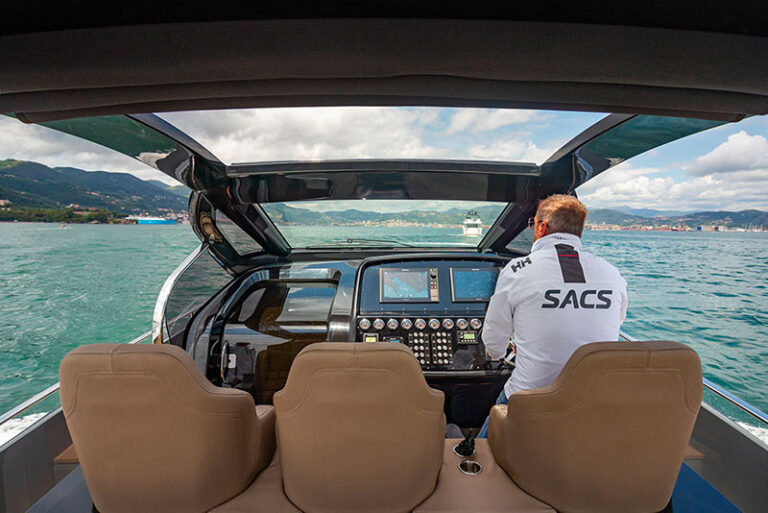 glass roof and equipped with a multitude of hi-tech solutions, makes us feel the absolute protagonists of this breath-taking sea trial. The triple seat is a hymn to comfort, the super button panel is well-defended by a large 45-degree inclined windshield that guarantees an excellent view. In short, more than a driving console, it looks like a control room.

The exterior layout, masterfully and intelligently designed by Christian Grande, enhances the “walk-around” concept, offering the possibility to move up and down in total comfort and safety even when the boat exceeds 30 knots.

We take note of this great freedoom of movement while walking with ease the large side-decks that, accompanied by the handrails positioned above the fiberglass sides, lead to the bow sundeck, where two exaggerately comfortable chaises longues give us the thrill of lying in the bow as on a home sofa, but with the wind caressing our cheeks.

Looking at the hull structure, we are impressed by the massive D-shape tubulars in foam and anti-collision material, covered with the classic Hypalon neoprene. The fiberglass hull is monohedral and segmented by four longitudinal spray rails, two on each side. In short, the Rebel 47 does not deny the family feeling of the boat but goes further, ensuring a first-rate place among the cruisers‘ ranks. 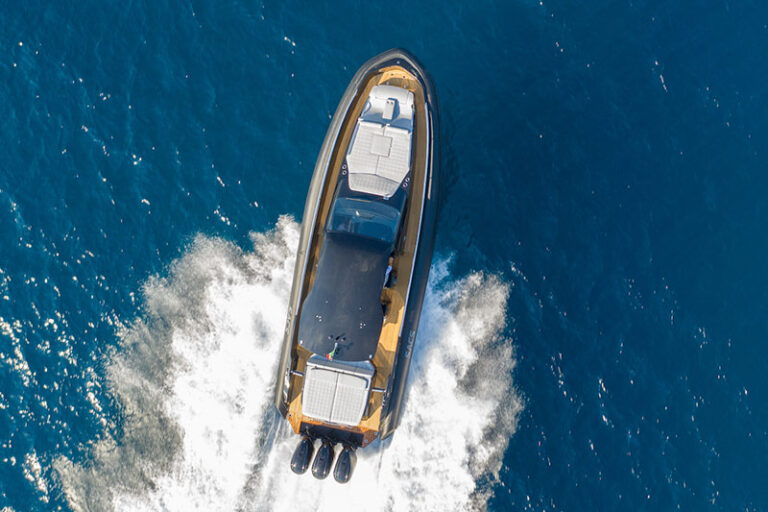 Interiors: the sleeping zone is another world to be discovered 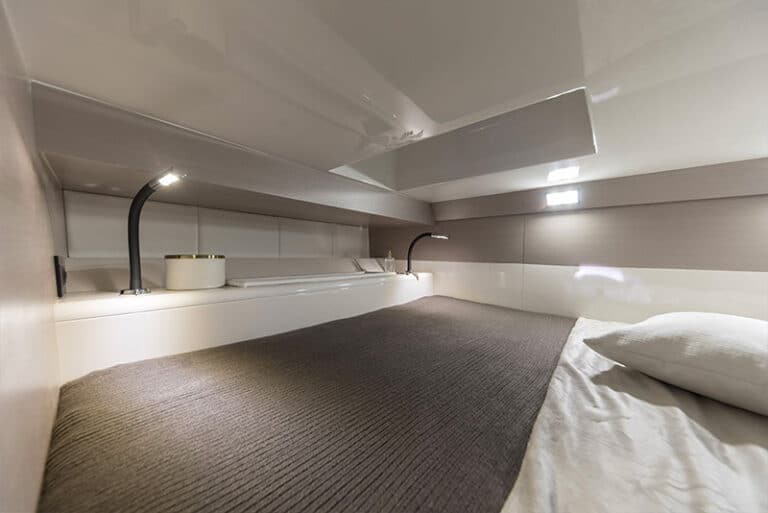 As a good cruiser, the Rebel 47 houses a world waiting to be discovered even below deck. In fact, as soon as we open the sliding door of the companionway, we are immediately stunned by the depth and width of the lower deck, where an extra luxury, comfortable and strikingly habitable environment takes shape.

The sleeping zone consists of two cabins and 5 berths: a king-sized double bed dominates the master cabin which, located next to the dinette, creates a unique open space; a queen-sized berth positioned on the left of the entrance and two beds in the cabin below the cockpit, there the headroom is enough to have a peaceful sleep.

The interior layout is completeed by a bathroom equipped with shower box and separate toilet. The design is essential and modern and the owner can choose from a wide range of finishes and color options to add his personal touch to an overall classy boat. 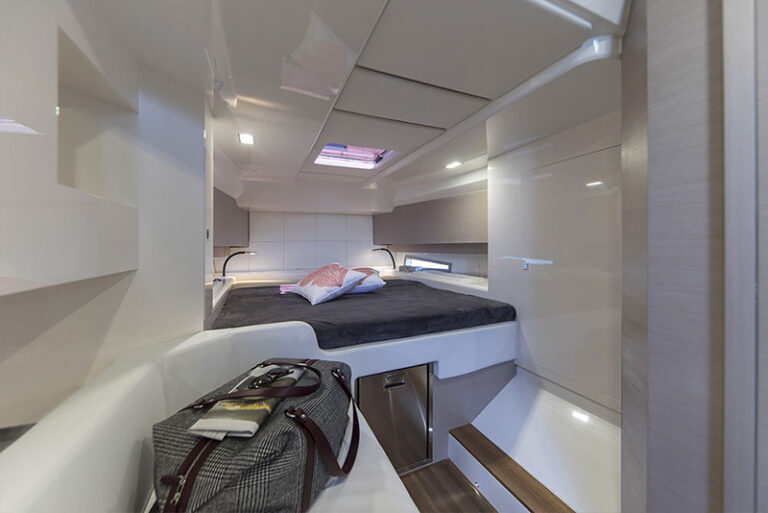 Leaving the Marina di Varazze behind us, a sly sea welcomes us, 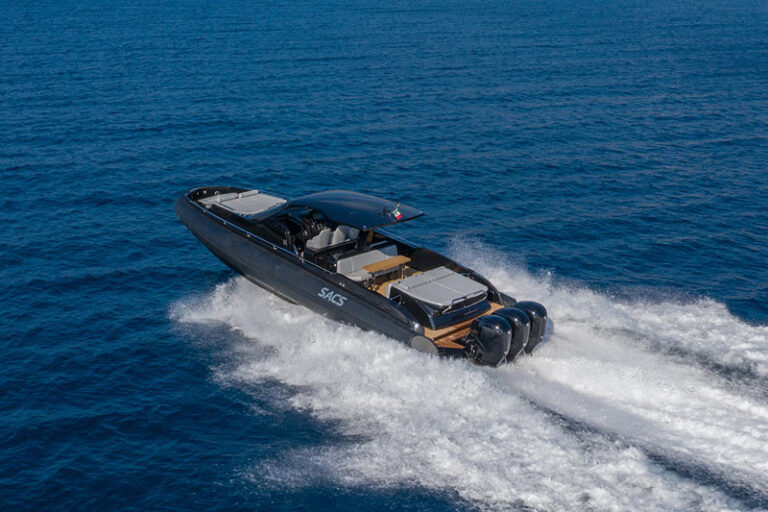 apparently ready to get rough at any moment. On the other hand, there remains a light and pleasant breath of libeccio which partly dampens the heat of a scorching sun but which certainly cannot oppose the competitive burst of our Rebel 47.

So, gliding over an expance of almost flat and harmless waves, we begin to fush the throttles forward and, at 12 knots and with a fuel consumption of 92 l/h, the beast gets up on plane.

Acceleration is progressive, decisive but gentle. Steering is direct, but at the same time soft, fluid and enveloping.

In short, the boat is so silent that there is the risk of getting bored; so, impatient to know what this Sacs is really capable of, we decide that it is time to unleash the triple Yamaha which, unleashing all its power, pushes the Rebel 47 to a maximum speed of 49.7 knots. And there is nothing to do: not even at top speed you can hear the sea, let alone any vibration. 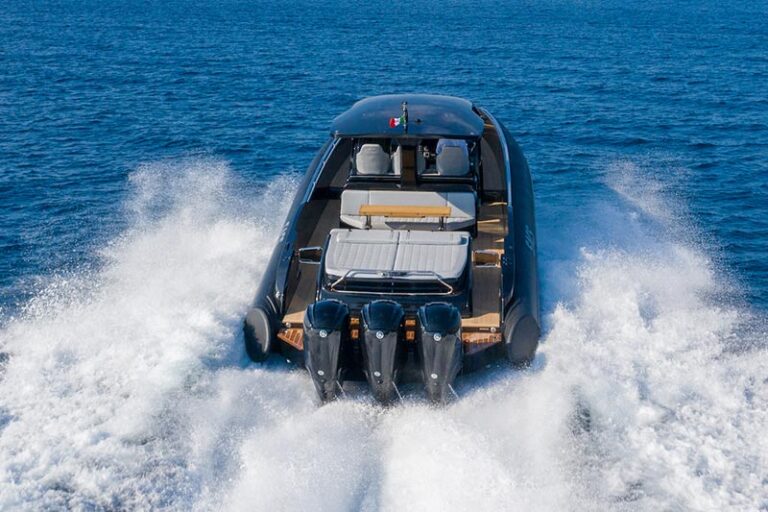 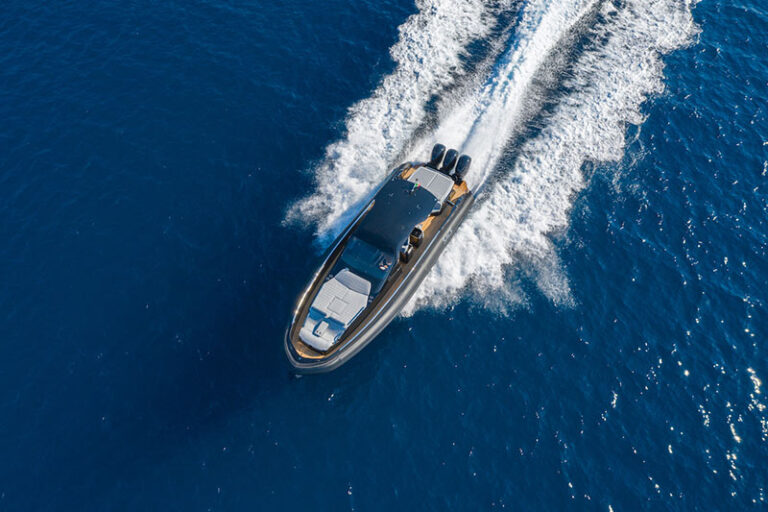 As often happens on Maxi Ribs of the same size, the Rebel 47 does not tend to remain with the bow high but travels constantly parallel to the water and, since on the straight it proves to be impeccable, we begin to have fun by performing increasingly tight turns. The hull tilts and resumes trim with impressive speed. The return wave are unperceivable under our feet and, as evidence (yet another) of the comfort on board, there is no water spray that crosses the threshold of the tubulars.

In conclusion, we can say with satisfaction that this Rebel 47 is much more than a Maxi Rib: it’s a truly great boat. 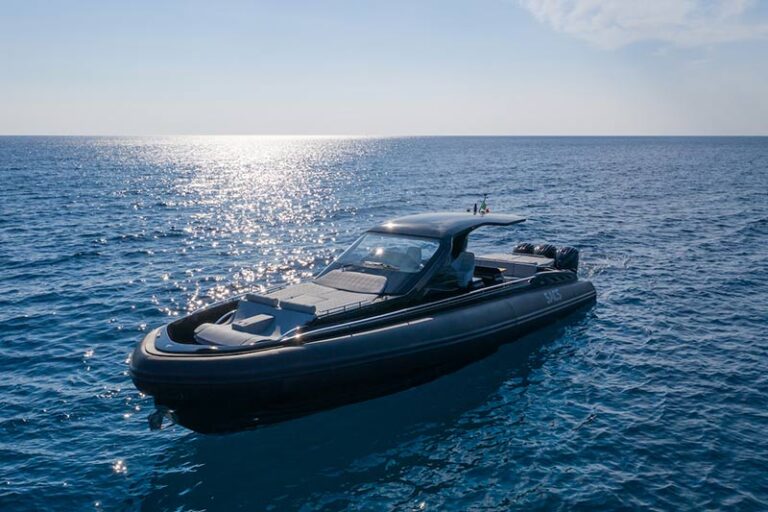