Scanner Marine is organizing a four-day open day from September 16-19 in Varazze (Liguria). The stars of the event will the latest Envy 1200 inboard model, the Envy 1400 in the two inboard/outboard versions and the Envy 770 outboard. The well-known Novara-based boatyard will be playing its aces in the stretch of water in front of the Marina di Varazze, giving the thrill of these fascinating, highly functional inflatable boats, all to be tested and see first-hand for the occasion. 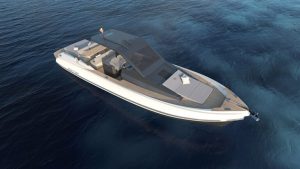 Confirmation of Scanner Marine’s quality and reliability can be found in 32 years of experience in which the company has evolved concretely, starting from its first far-sighted project, the Scanner 590, an inflatable boat that presented itself to the public, captivating them with its harmonious and streamlined lines. But there was one thing that increased the value of the Scanner 590, and that was the increased use of fibreglass resting properly on the tubulars. This was a winning choice, guaranteeing greater ease on deck and therefore those spaces that are indispensable on boats that are in any case “easy” and often used on mini-cruises lasting just a few nights. Over the past three decades the Montemitro family has been at the helm of this brand whose business is highly focused on Rib-boats and custom yacht tenders. Its strengths include, above all, a great deal of craftsmanship and strict adherence to the Made in Italy standards, because, at Scanner, “everything is made with skill in-house”, even the design.

Added to this is the simplicity, the genuine or simply “human” frankness of all the staff at work, which reflect the mission and vision of a company whose concept of navigation is not by change expressed by producing splendid boats that can be highly modified to meet the needs of its customers. Clients with whom a clear relationship is rightly established, aimed at absolute customer satisfaction.

The new Scanner Matrine Envy 1200 did not missed an official parade for a world premiere at the last Venice Boat Show. The aesthetics 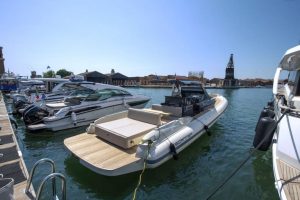 include a running line in navy blue embracing the tubulars in their entirety, increasing the perspective and creating a new appropriate chromatic dynamism, which goes with the very dark hull. The scream of sportiness is all in the power expressed – depending on the equipment chosen – by the two sterndrive petrol engines or the dual diesel propulsion or the two/three outboard configuration up to 1,200HP. The overall result is the compelling allure of a 12-meter day-boat, which can also be used as a tender for the on-board equipment of a superyacht.

Below deck, the owner can take advantage of a cabin with a bow-oriented double bed, head and separate shower. Fibreglass bulwarks surround the cockpit, guaranteeing safety. The stainless steel handrails faithfully reflect the sea and you can lie down on the deck for the ritual adoration always due to Helios. The natural teak fibre on the deck is a sensational choice by Montemitri design. Even more convincing is the “excellent hull” which offers really comfortable cruising at sea. In conclusion, looking at her in detail, the Envy 1200 doesn’t hide her truly “meticulous” build quality at all. 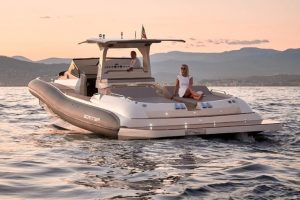 The Envy 1400 is another thrill, that of fast sailing, because this inflatable boat planes over the water almost as if it wanted to free itself from it as in a hybrid leap worthy of Icarus: 50 knots unravel in the blink of an eye from the furious outboard power of twin Volvo Penta D6s, with a choice of 800 to 900 HP.

If that’s not enough, the owner can also opt for three Mercury Verado 450 Racing, as in our sea trial. 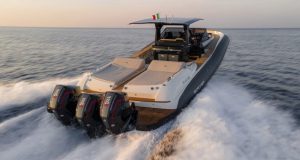 The fast thrill of this 13.70-meter Maxi-Rib is for everyone because there’s room on board for two cabins, a separate head and a very comfortable dinette for post-cruise comments at sunset.

Those who prefer not to see the power of Swedish nautical engineering with their hearts open, opt for the Envy 1400 version with inboard engines, also on display at the Scanner Marine open-days. 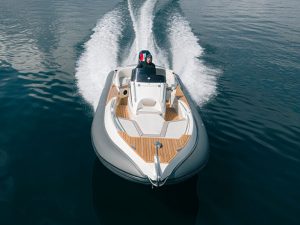 appealing in her smoky grey livery, fitted with an outboard engine that delivers up to 47 knots. The tubulars are in neoprene hypalon resting on the fibreglass hull. In its almost eight metres of overall length, the Envy 770 manages to create an onboard dimension with personality, spacious, especially in the bow sundeck, and centred just right by the console in which the recess for a cabin, equipped with a service if necessary, stands out. Appointments to experience the thrill of Scanner Marine’s inflatables will be made at Marina di Varazze, a must for enthusiasts. 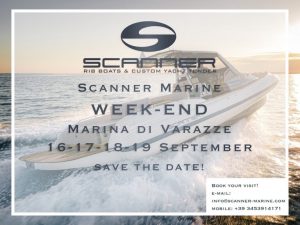