SATEC 2018 “Economic landscapes, a course for the boating industry”, the Ucina convention on the opportunities and development of the sector

The current situation of the boating industry and its development opportunities were the main topics of ” Economic landscapes, a course for the boating industry”, the convention organized by UCINA Confindustria Nautica. The event, held in Rapallo during the SATEC 2018 Convention, focused on the Italian and international market prospects, analyzing the investment plans supported by the European Union for companies operating in the boating industry.

The convention started with the conventional greetings from institutions: Councillor for Tourism, Trade and Productive Activities of Rapallo Andrea Benveduti, followed by the mayor of Genoa Marco Bucci, who recalled the active role of both the region and the city in making the regional capital a pole of excellence for the Italian boating industry.

The first speech of SATEC 2018 was made by Alessandro Plateroti, Vice Editor-in-Chief of Sole 24 Ore, that gave an expert insight into the European and global political and economic landscapes: “Today, we are witnessing a fragmentation of the global order. The political variable is important, there is no longer only one control room to regulate world trade and political relationships. The USA  is undergoing a change: Trump is showing how much a country’s relative weight can make the difference, when strength and economic and financial power are tied to social integration and the country can therefore  dictate the guidelines for the development of the others. Europe is lacking in this unit, so the initiatives proposes by EBI and UCINA  to keep the boating sector out of the trade war are appreciable”.

As to this matter, Piero Formenti, vice president of UCINA Confindustria Nautica and Chairman of EBI, illustrated the actions taken with regards to the president Antonio Tajani and all members  of the Italian parliament in Strasbourg, finding the support from other  European trade associations: ” As an European association, we have written a letter, signed by myself and the president of the American association, with the endorsement of the world sector association”, claimed Piero Formenti at the end of the convention ” in the letter, we explain the reason why we want to keep ourselves out of the trade war. The letter was sent to the USA Congress and the European Parliament”.

Andrea Bianchi, Director of the Industrial Policies Department,  outlined the Confindustria’s proposals  for industrial policies and the opportunities  for the boating sector: ” Our incentive and support system for companies is highly detailed, we must strengthen  communication to enable UCINA members  to know and access the tools which are currently available. We need to work towards the

development of the 4.0 plan for companies and  go back supporting investments”.

Carla Demaria, President of UCINA Confindustria Nautica reassured about the current economic situation of the boating sector: ” The moment is positive and revival is solid. The context surrounding us is certainly favourable: our competitors, including France, Spain, Greece and Croatia, have introduced  penalties which further benefit Italy. Also in terms of boat leasing, Italy has access to the most secure and reliable system. Europe  has initiated some infraction procedures for leasing and hiring with regards to Malta, Cyprus and Greece, while Italy was contacted merely for information by the European  Commission regarding hiring activities and the application of tax exemptions”.

The role of Confindustria Nautica remains important at a continental level: ” UCINA was consulted by the offices of the Ministry of Economy and Finance to provide a series of technical elements, useful to complete the answer that Italy sent to the European Commission. This is a further concrete evidence of how the role of UCINA Confindustria Nautica in supporting the boating sector is officially recognized by institutions“. 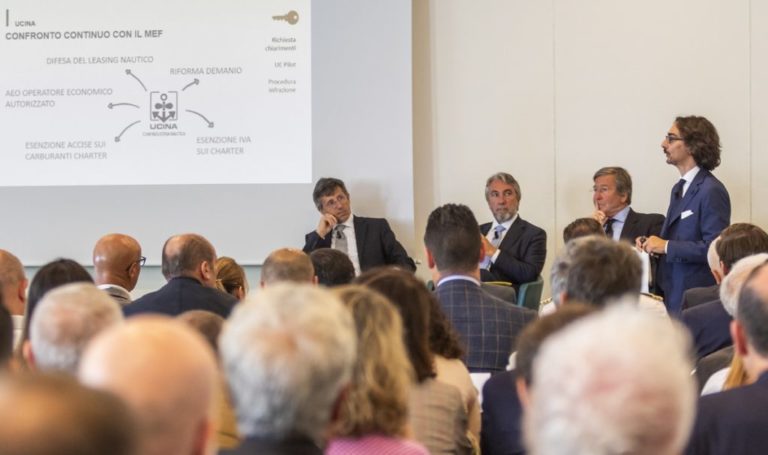 Enrico Duranti, President of Assilea (the Italian Association for Leasing), confirmed the considerable growth of boat leasing, which  registered a +58% positive trend in 2017 and keeps on improving in 2018: “Over the first 5 months of this year, we have witnessed a +29% growth compared to the same period of the previous year.  Examining financial investment reservations, it emerges that 95% of these investments have been made in the central-northern areas of the country, showing a clear division within the country”.

With the entry into force of the new Nautical Code in Italy and  the tightening of tax policies in the rest of Europe, the large yachting industry in Italy is witnessing new opportunities, as showed by SOS Yachting CEO Alex Mazzoni: “Italy  is currently the first tourist destination in the Mediterranean and the most secure and reliable place from the regulatory and fiscal point of view of charter market which, not without reason, saw Italy  overtook France in 2017″.

Finally, Paolo Ghinolfi, CEO of Sifà-BPER Group, outlined that long-term hiring can represent the future of the boating sector: “I believe that the long-term hiring model can, over the next few years, be a more popular model for boating, more adequate for family needs. In 1995, for long-term hiring, 5000 cars were registered. In 2017, registrations were over 350,000. This transformation, which is also a cultural change, from purchase to use brings with it a series of technological innovations, such as digitalisation, use of apps, preventive maintenance and an organisation where the trade network is increasingly more tied to post-sales assistance services”.

During the SATEC 2018, was also announced the winner of the Marisa Bellisario Award, a price which, every year, is awarded to women who, at national and international level, distinguished themselves in the world of management, science,economy and social sciences.

This year, the price was awarded to Carla Demaria, President of UCINA and of Monte Carlo Yachts.

Tuna drifting: chumming by hand, or not?

Rio Yachts Colorado 44. Seaworthiness and beauty are standard. Sea trial in the beautiful waters of Procida.