Astondoa 377 Coupe, the «blue whale» will be at the Cannes Yachting Festival

The 377 Coupe succeeds the 665 category in the Savage Ocean fleet and will be exhibited at the Cannes Yachting Festival next September. The Spanish boatyard Astondoa also points out that the yacht is in some ways its “blue whale“. If only for the inspiration of the “silhouette” characterized by the 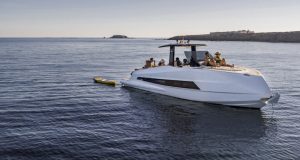 movements of the rounded lines that denote the 377 Coupe, resembling in fact the largest marine mammal in the world. The Blue Whale’s DNA is imprinted with enormous size, but this does not preclude its speed and agile movement, and it is in these characteristics that the project focused. Differences: the 377 Coupe has an overall length of 11.61 meters, the adult cetacean almost twice that.

Colour selection with the configurator

Anyone looking for a customization of the Coupe 377 will find it on the Astondoa website. For this model, the shipyard offers a configurator that acts as a kaleidoscope of colours. So the owner’s choice for his 377 Coupe revolves around bold Mediterranean colours: Mykonos Navy, Formentera Blue, Saint Tropez White, Gold Tarifa, Capri Anthracite, Deep Sea Black, Cinque Terre Red, Nice Silver and Portofino Green, to name but a few.

Sleeping accommodation up to 4 people

Appearances can be deceptive. The nautical metamorphosis of the “blue whale” in no way limits the manoeuvrability and directionality of the yacht. The aerodynamics are there, but robustness and stability are not lacking either. The 377 Coupe bursts into the water with her deckhouse firmly forward. The maximum beam of 3.56 meters is expressed in the central part of the hull. The bridge is well-protected by a T-Top. The three pilot seats are folding, “shielded” behind by a darkened but transparent panel, which look over the instrumentation, which is in turn protected by a windscreen glass. 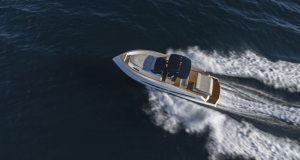 Underneath the seats, facing aft, is everything you need for provisions and food cooling via a cooler. If required, the cockpit can accommodate a table with two face-to-face sofas around it for 6 people. In the alternative configuration, the table is lowered and the cockpit becomes an additional sunbathing area. The stern gives way to a sundeck that flows into its own  platform in front. The sundeck at the bow can accommodate two people, and at the end of the sundeck there is a steel bow fitting for dropping anchor. Returning to the helm station, however, the side-decks seems to have been sacrificed and the handrails are missing. 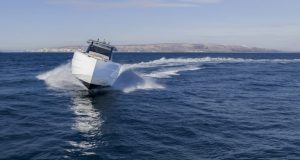 engine room is located under the cockpit, and further aft is a garage area presumably for the tender or whatever the owner prefers. Sleeping accommodation is provided in the bow cabin, equipped with a TV, a large head with separate shower, generous fittings and luxury details. Guests sleep in separate beds in the cabin below the cockpit.

Only more than a century of experience and four generations of producing boats can produce a yacht that is so popular with the public. And Astondoa doesn’t seem to want to shy away from that once again. Propelling all this Iberian industriousness are two Volvo Penta D4-260 hp diesel engines or among the optional configurations two Suzuki DF350ATXX 350 hp and, alternatively, three Mecury Verado F300 V8 300 hp outboards to be driven by joystick. Maximum speed 36 knots, cruising 28 knots.

1,000 miles in the Tyrrhenian Sea, the Daydreamer’s logbook

Boat itinerary to the Ponza island