When the gybe becomes “Chinese”. How to deal with it.

Chinese gybe : videos and tips to deal with it.

It is called “Chinese” for the poor level of sailing preparation of the people of same name but it is actually an involuntary gybe.

Highly feared in the era of spinnakers, now it is perceived as a less serious danger. That’s probably because, equipped with gennakers, we tend to steer our boats under a tighter angle or probably because of the absence of a spinnaker pole and guys but the fact remains that the risk of incurring in a Chinese gybe under normal weather conditions has become less frequent nowadays.

First of all, it is important 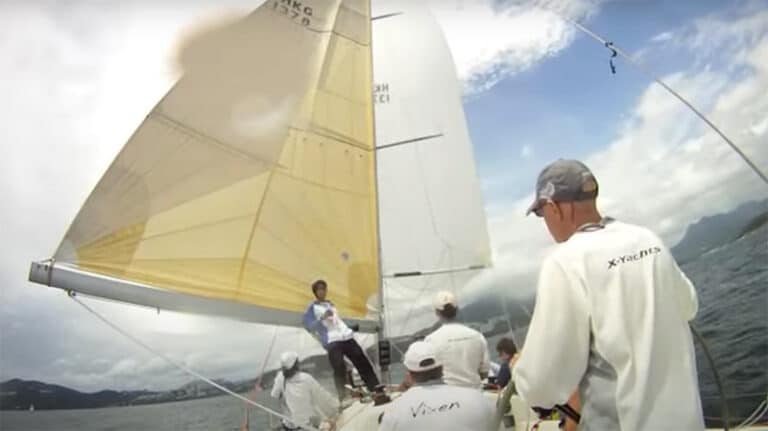 to consider that, unless the helmsman faults in his own practice, the danger arises when our angle approaches 180 degrees and the wind exceeds 20 knots. In this case, we’re running downwind and the causes of the involuntary gybe can include:

The stronger the wind is, the faster the boat will sail; everything will happen suddenly, leaving no room for corrective action.

Tacks change, the stern moves and the boat quickly starts to luff on the new tacks, with an inclination of almost 90 degrees. The rudder doesn’t draw.

The fore sail, be it a gennaker, a spinnaker or an asymmetrical spinnaker, remains hauled upwind, preventing the keel from producing its righting action because of the excessive load on sails. At first, the mainsail will stay upwind and then will violently drop downwind. 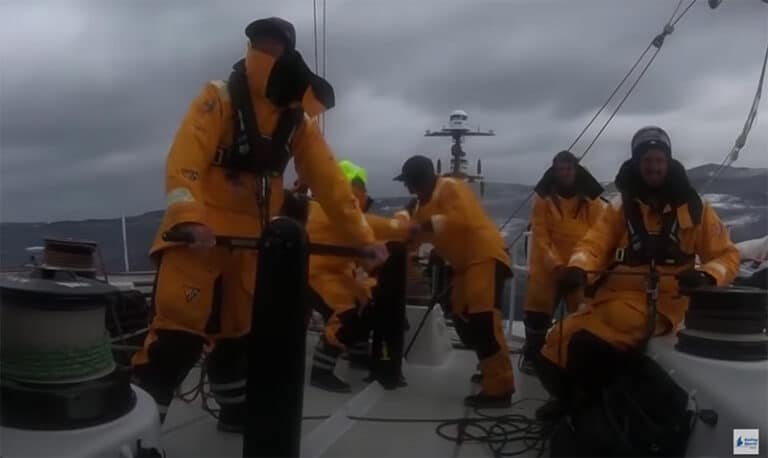 At this point, someone often falls overboard. The hope is that he is not in the same trajectory of the boom when the latter will inevitably crash into the water downwind.

The recovery maneuver is not easy because the crew is upset and the boat inclined. You need to be cold-blooded. First of all, you should make sure that everyone is ok and on board. Then, you can deal with sails.

If your boat is fitted with a gennaker or an asymmetrical spinnaker, you only need to ease the sheet upwind and let the sail goes on the other tacks; not to haul the new sheet and let the sail flap helps to recover heeling.

If your boat is fitted with a spinnaker, the maneuver is more difficult. We recommend not to release the halyard immediately ( it is essential to make sure that it is knotless and unjammed) to reduce the load on the sail; the second step is to open the yard and move the guy (provided that the spinnaker pole is still intact), always avoiding the sheet from falling overboard on the same side. At this point, you can slightly ease the upwind sheet, making sure that the spinnaker hits just above the water surface. The boat will recover its balance and you can recover your sail.

In both cases, the mainsail must be

unloaded by releasing the kicking strap and the traveler must be moved downwind.

The following step is the quantification of damages: a broken spinnaker pole or rail are the minimum. The worst dangers can involve mast and boom.

Because of the sudden passage of the mainsail on the other tacks, the violent impact on the water can break the boom while the excessive effort can provoke the rupture of the parrel.

In the boat is fitted with flying sails, the mast is seriously put at risk because in the event of a gybe; moreover, considering that both the sail and the boom collide with the flying sail, dismasting becomes possible. All the forces at play can cause the mast to break.

An useful suggestion, especially if you’re running downwind with your spinnaker, is not to expose the sail too much to the wind and reach close.

The following is another classic example of an involuntary gybe provoked by a boat gliding. As you can see, that may happen to the most experienced sailors, too, during the Volvo Ocean Race. In this case, yachts even have a canting keel that, tilting downwind, certainly doesn’t help!

The team of this Farr 4o was running really fast!