“Heading for the future”, Hydro Tec celebrates its 25th anniversary with an omnia work that includes projects, boats, biography, thought and attitude of the designer and nautical engineer Sergio Cutolo whose emotional pen is dedicated to the public in the first person. 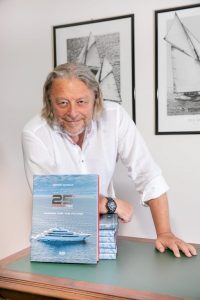 The founder of Hydro Tec in 1995, after an experience at Cetena when he had just graduated, and then since 1989, at the age of 30, as general manager of Baglietto, Sergio Cutolo offers the public his story with “Heading for the Future” (€ 70.00, 213 pages, Sagep Edizioni), an extremely comprehensive book also in terms of its treatment of the lives of the people who have contributed to the greatness of the Italian boating industry and with whom the author has worked together.

In fact, there is a great deal of material collected in the form of, among other things, letters, sometimes even poetic ones, which appear in the text at the same time. There is one from Alcide Sculati‘s son, Sergio Cutolo’s first great teacher and the tireless creator of those beautiful shapes that occupy the sea under the Baglietto brand.

Equally important is the contribution of Luca D’Ambrosio, editor-in-chief of The International Yachting Media and founder of Blive Communication, who oversaw the creativity, editorial structuring and layout of this great work. Sergio Cutolo dedicated the first sentence of his thanks to him with words that fill us with pride: “Working together for a year to create this book has been a unique and unrepeatable experience“. And Luca D’Ambrosio comments: “Sergio is like a river in flood, not only because he is unstoppable but, above all, because he is able to break down barriers and boundaries with embarrassing simplicity”.

“Heading for the future” relentlessly focuses on the history of design in dream boats, where nautical architecture continues to impose its technical dictates time and time again. At the origins of Hydro Tec it is precisely this science that will later evolve into that design with a “Renaissance” philosophy that Sergio Cutolo relentlessly draws on: “Origin, birth and evolution of the Company. Hydro Tec is: “A Renaissance workshop where engineering and architecture once again become a single discipline“, achieving that poetic combination that makes the idea action. Then the verb of speech orders itself as in the hierarchy organizing the discipline of Hydro Tec oriented to progress through the future. 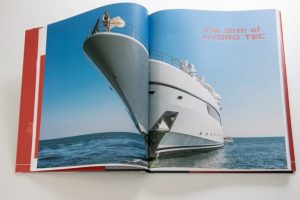 A fascinating history of the world’s most famous super- and mega yachts, “Heading for the future” includes in its introductory part an excursus from the adolescence of a boy who would become the famous “Engineer” with his academic yet sober and highly comprehensible speech; the man who taught everyone about nautical architecture, including Luerssen‘s Sales Director, Micheal Breman: “Sergio Cutolo is the erudite right-hand man who taught me a visceral love of naval architecture”.

As we were saying, when he was very young Sergio Cutolo sailed the Neapolitan sea, first on board a composite motorboat. Then the family’s 1930s gozzo “where, under layers of varnish covering the beautiful wood on the stern deck, we discovered the faces of the Naples players immortalized”. 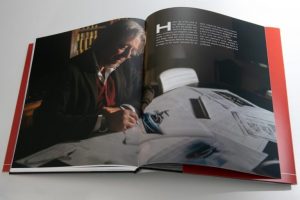 races and wind are like a nautical poem that unites everything, always inspiring the design of the superyachts built by Hydro Tec.

“It has been a long road full of encounters that I have travelled together with Hydro Tec in these 25 years”, explains the founder. Today, Hydro Tec boats more than 150 yachts in service and “is one of the few companies able to offer a holistic approach encompassing all the technical and stylistic aspects of yacht design”. What’s more, “Hydro Tec is the result of the different experiences of the people who work there: engineers, architects and designers, who together make the studio a place where naval architecture and design make our work virtuous and creative”. Heading for the future came out just right with Aurelia‘s imported win at the World Superyacht Award by Cantiere delle Marche; and at the same time at the World Yachts Trophies where, during the Cannes Yachting Festival, RSY 38 EXP “Emocean”, a superyacht by Cantieri Rosseti, was the “Revelation of the Year“. Both were signed by Hydro Tec in terms of exterior design, architecture and naval engineering.

i-Yacht: “How to have a boat without owning it”