Lavezzi and Budelli, an anchorage in the clouds

Drawing the anchor in the waters of Cala Lazzarina in Lavezzi or Manto della Madonna in Budelli means to run the risk of confusing the border between sea and sky. Here, water transparency is shocking. Air and water are mixed together in a blue torn like a veil by a group of rocks and cliffs that finally help to find the border between air and water.

However, the best time to get these anchorages is May and June when the crowds of tourists still do not assault them. Then, something changes, with hundreds of boats of every type and size scattering these waters.

After having left the anchorage of Spargi, we have headed for the neighbouring Budelli.  More precisely, that area between the eastern part of the island, well-known for its pink beach, and Santa Maria, just opposite it. 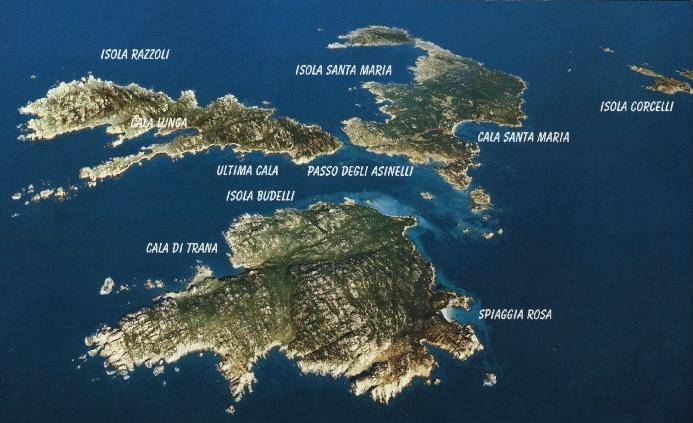 Here, an expanse of blue opens up and washes Razzoli, the third island of this area, situated north the first two ones.

When weather is fine and there’s no wind, the most picturesque anchorage is Passo degli Asinelli, on the northern side. After leaving Spargi, we head north and sail along the southern coast of Budelli while keeping a good distance from Punta Lodi. Soon, on the starboard side, a deep bay opens up, generated by the two shores of Budelli and Razzoli. A quick look to the navigational chart and a little attention are enough to penetrate this fjord and reach the western coast of Santa Maria. The latter is a gorgeous anchorage accessible only with winds blowing from the first and the second quadrant; impossible, instead, with fresh mistral.

Given the prevailing wind directions in this area even in summer, it follows that the most popular anchorage is that one situated neat the eastern coast of Budelli. 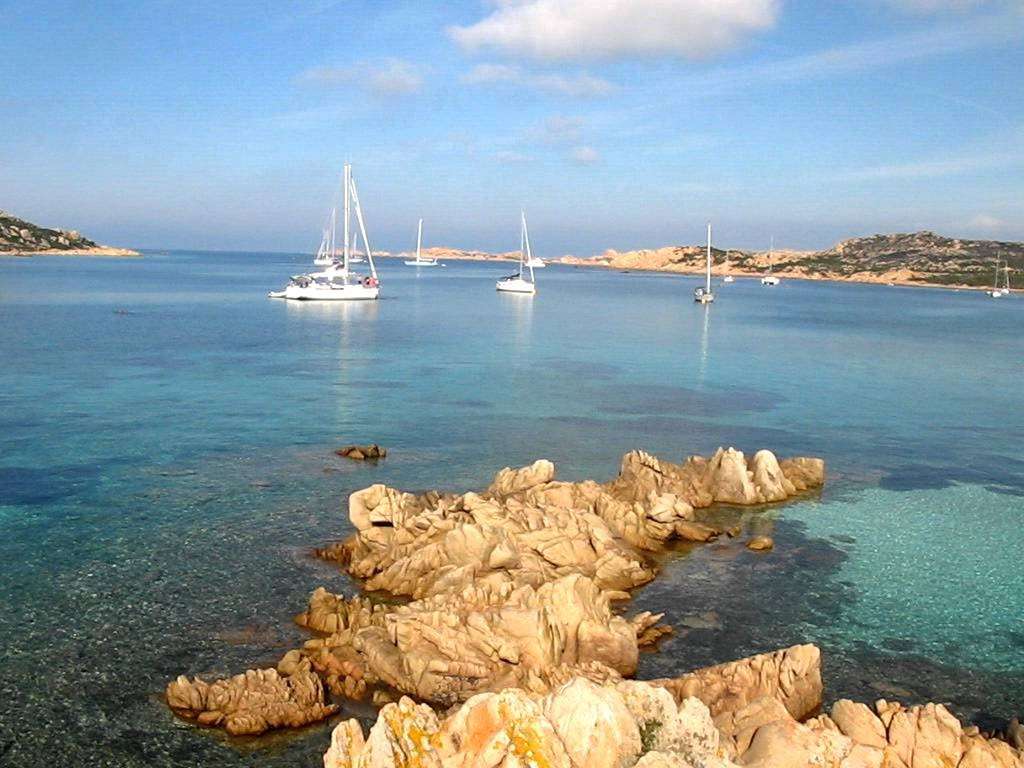 Until recently, the Park Authority made available a series of mooring buoys that prevented the thousands of anchors dropped there from destroying poseidonia meadows. Two years ago, under pressure from many tourist operators that didn’t look kindly on private boats, buoys have disappeared and the yachtsmen have no choice but to moor very close to the shore.

Coming from East, the first cove is the first one after the pink beach. Known all over the world, the pink beach is recognizable thanks to the presence of a terraced top that stops any boat, tenders included, from landing. The beach lost its original pink colour a long time ago and the access ban in force for 20 years has not helped to improve the situation. The microorganisms responsible for the special colour that makes the beach famous all around the world seem not to want to come back.

If you drop the anchor in the cove next to the pink beach, you can go ashore with a tender and get the famous beach after a  short walk on a wooden raised walkway. But, above all, you can reach Mauro, the historic guardian of Budelli. 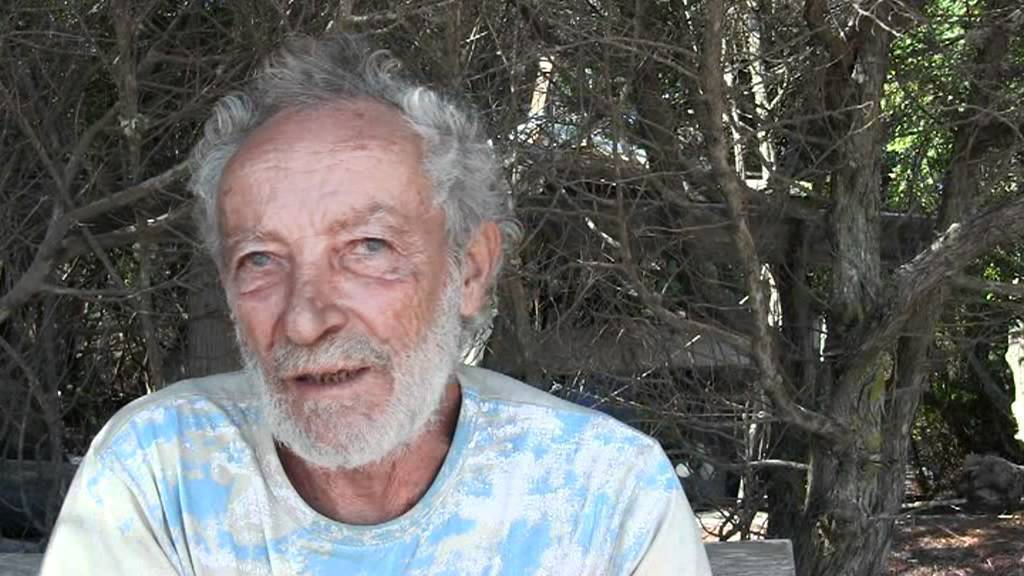 His story is incredible. Mauro got Budelli on a catamaran in 1989. For family reasons, the then guardian was forced to abandon the island and return to Genoa, so he jokingly asked Mauro: ” Why don’t you take my place?”.

Since then, Mauro has always lived on the island and has been taking care of it for 27 years. For some time, however, he has become an unauthorized presence. The Park Authority, indeed, wants him to leave his work and has dismissed him. But he doesn’t give up and has launched a Facebook petition to stay on the island.

Actually, his work on the island goes beyond a simple vigilance service on a piece of island that will never be pink again. He welcomes tourists, offers explanations, stories and anecdotes, picks up the trash generated by both sea and tourists and fights his fight to stay there.

If, on the contrary, you prefer to get the Knights’ Beach on the northern side of Manto della Madonna, you have to sail for another hundred yards. You can drop the anchor on poseidonia or closer to the shore on a entirely sandy seabed. This anchorage is perfectly sheltered against mistral wind and, even under wind conditions, the water is always flat. From there, you can get Passo degli Asinelli where the water is so clear that seems white.

Still cradled by the last night, we head for Bonifacio. However, our itinerary includes a not-to-be-missed stop that often turns into a longer stop: Lavezzi Island.

The Straits are quiet and fresh mistral is expected to blow around noon. We head for the lighthouse of Lavezzi to enter one among the most beautiful anchorages in the Mediterranean: Cala Lazzarina. 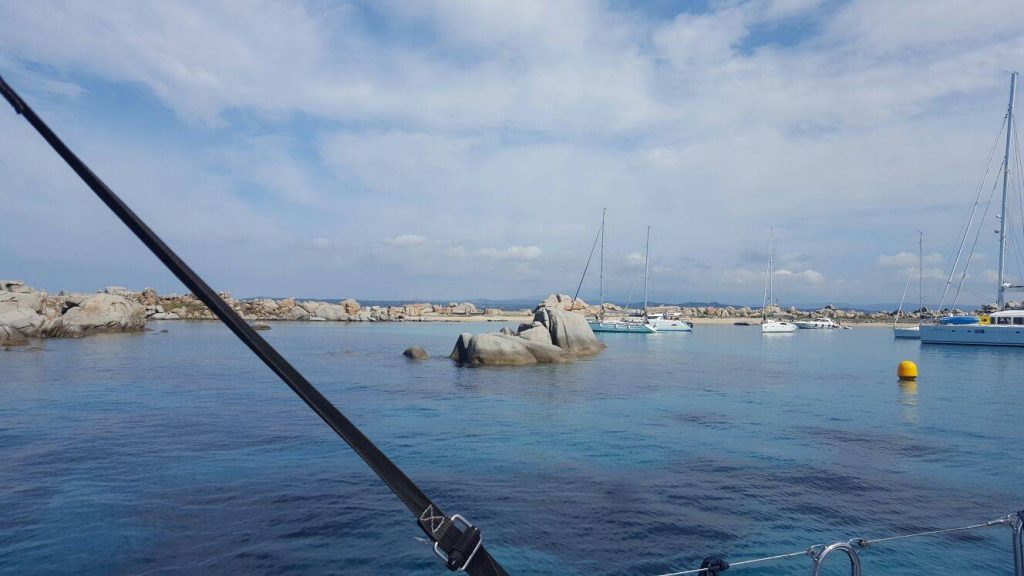 It’s a small cove sheltered against mistral and winds from the first quadrant. In the event of south wind, we suggest head for Cala Chiesa or Cala Grecu on the northern side. 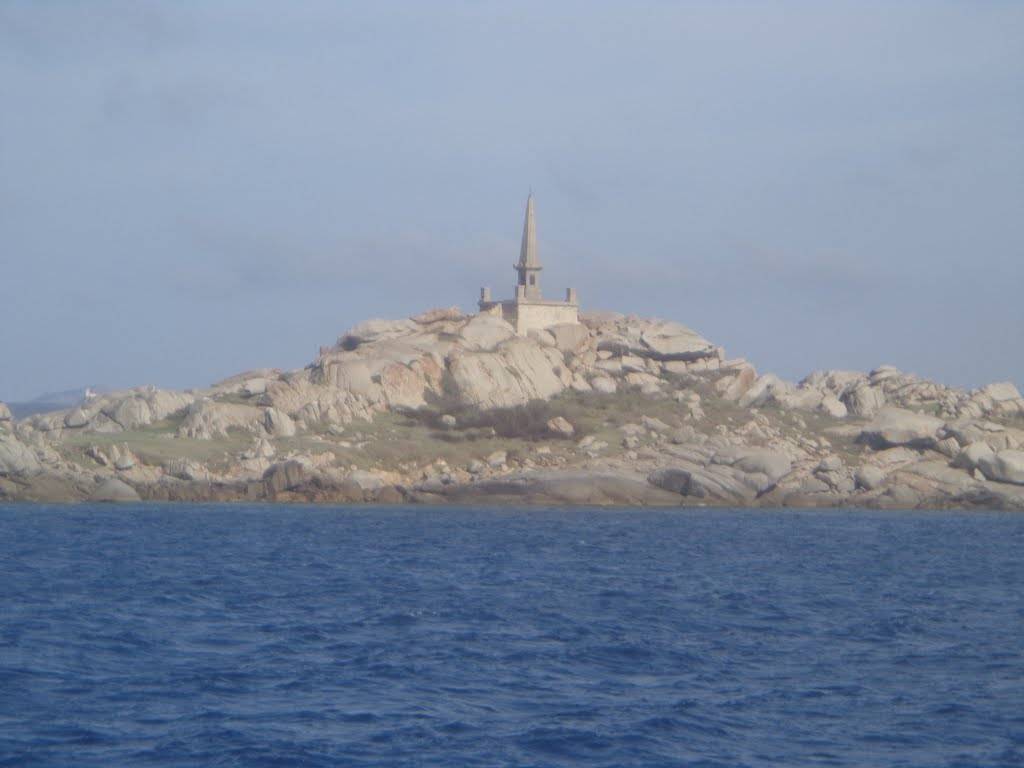 In the distance, you can recognize the famous pyramid of Semillante on the left of the cove entrance. Actually, it is more similar to a pagoda but it has been always known as “pyramid”. It is dedicated to the victims of first-rank frigate Semillante’s shipwreck.

Semillante was a ship of the French Navy that was transporting arms and soldiers from Toulon to Crimea as reinforcements for the French Army.

She departed Toulon on February 14th 1855 in strong mistral. At 5:00 am of February 15th, she was caught in a storm and a gust of wind drove the ship into rocks on Ile Lavezzi. 695 people died and 560 of them were buried in the small cemetery of the island. Exactly one month before, another ship of the French Navy ended up on the rocks almost without losses of life. Crew members of that ship were all repatriated and embarked on the Semilante where, just one month later, they died.

With the lighthouse of Lavezzi on the starboard side and the pyramid easily identifiable from the bow, we sail along Cala di Ghiuncu. Opener than Cala Lazzarina, it is a good option when your destination is too crowded with boats. After Cala Ghiuncu, we enter Cala Lazzarina. It is highly recommended to be careful and use the navigational chart (if you prefer, your map navigator, too) since the area is rich of rocks on both sides. Once in, you can come alongside on the left and drop the anchor in three meters of water. It’s a day of June, so the ideal dimension to enjoy this wonder of nature. The day gets full of dives, beach excursions and scuba dives, surrounded by fish that fear nothing since we are in a marine reserve.

It is not uncommon for the Gendarmerie to visit this area. After dropping the anchor out of the bay, they enter with a big RIB to check papers. Be sure that, before your sailing license, they will want to see your logbook, a document required by the Italian Navigation Code but usually poorly used by Italian boat owners. French yachtsmen, instead, give serious consideration to it to verify routes and travels. The crew list is another document they usually want to see.

The worst time to stay in this piece of heaven is between 11:00 and 17:00. Throughout the year, the cove is literally assaulted by boats coming from Sardinia and Bonifacio, full of hit-and-run tourists. We suggest get the bay very early in the morning and go away before noon or, when weather is fine, arrive at about 18:00, drop the anchor, have a bath and enjoy a cocktail and dinner. What will follow will be one of the most beautiful nights of your life… regardless of your traveling companions.