Procida is the closest island to the mainland in the Phlegraean archipelago, emerging completely of volcanic origin in the Gulf of Naples. 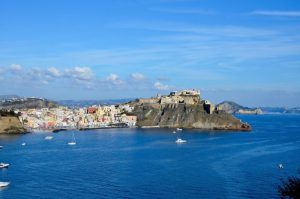 The island is just four hundred metres from the private islet of Vivara, to which it is connected by a bridge, and it is believed that in Roman times there was even a natural cliff that joined them together. It is possible to anchor in the Vivara inlet, but it is necessary to check the hold because of the seaweed-strewn seabed, and it is also advisable to obtain authorisation from the Park Authority. The island of Ischia, on the other hand, is larger and further out to sea than Procida, and is just four nautical miles away to the west. For stopovers on an itinerant cruise, it is advisable to continue from Ischia to the legendary Capri: there are 18 nautical miles between them. Otherwise, head for Forio, then from here continue sailing towards Ventotene or Ponza (42 miles). Procida is a protected marine park, so as mentioned, navigation is subject to strict rules, and it is (unfortunately) widely believed that these are not always respected. However, safety is a must, and these waters of the Tyrrhenian Sea also have a number of shoals, so it is best to rely on nautical charts and check for details.

The marine area is known as the Neptune’s Kingdom. The name is poetically classic, but the regulations are less so, and yet it is well thought out to protect those marine environments that sailing enthusiasts must necessarily safeguard. The Park consists of four zones: A, B, C and D.

The first zone includes two distinct parts: the stretch of coastline west of Vivara, and the Secca della Catena to the south of the Ischia Channel, in both of which protection is complete and “only rescue and safety activities” are permitted.

Zone B is a general reserve and includes the Shoal of the Ants in Vivara to the WNW of Vivara and the stretch in front of the St. Angelo’s promontory in the Ischia Channel. The shoal is indicated by a beacon to the west. Fishing is prohibited in Zone B, as is diving without authorisation.

Zone C, instead, allows recreational boats to cast their hooks and sail: mooring is not free but authorised. This is a type of “partial” reserve that includes the waters in front of the eastern part of Procida, excluding those of the Procida Channel itself. The stretch of sea north of Punta Imperatore (Ischia) is also part of the reserve. 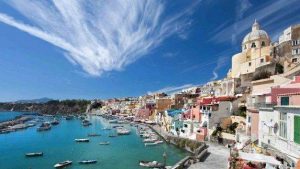 Zone D, also known as the “Canyon of Cuma” is located in the north-western part of Procida: cetaceans can be observed from here, and sport fishing and navigation are legal according to the rules. The Park Authority is able to offer up-to-date information also on health emergencies and answers to the following phone number: 0812445347. In this Zone (D), pay attention to the Shoal of the Sanctuary, which is about one mile from Punta della Scrofa (Ischia). If you are sailing on the western part of the coast of Ischia, you should also look out for the two Camerata rocks which rise up to the west of the port of Forio, from which they are about 450 metres away.

One of Procida’s most beautiful places to stay at anchor is Corricella, where the seabed is three metres shallow, so it is advisable for many boats to anchor further offshore in safety, well away from the shore. Marina di Corricella on the southern side of the island (GPS 40.76145979015247, 14.027100622562173) lies between Punta di Pizzaco and Punta dei Monaci, so it is advisable to manoeuvre at a safe distance, for example if you are coming from the Procida Channel.

Once you have found the dyke beyond the small port of Corricella, which is used exclusively by local fishermen, you can drop anchor on the sandy seabed with seaweed, whose draught reaches a depth of 6/7 metres. The shelter is from the north-west and is just a little sacrificed for those blowing from the north-east. 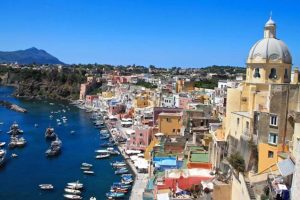 (phone number: +393334603877) offers 15 berths for boats up to 15 meters in lenght and 90 cm in draft. Services includes electricity, water and Wi-Fi (no toilets, showers and fuel station); and be careful because onshore on Procida disposing of waste generated during the cruise is rather complicated if you do not moor in the marinas. It should be noted that Corricella is in Zone B with the consequent restrictions. If you take your tender, you have to get closer to Corricella, which, seen from the open sea, displays all its beauty in the brightly coloured houses with their transverse ladders. Among the alleys and lanes, the houses form the outline of the village, gradually rising in staggered levels towards the interior of the island. The spectacle is one of original but fascinating town planning. Now it’s good to look, but it’s also good to have a “belly made a hut”, so a refreshment stop at the “Locanda del Postino” is recommended. And let’s not forget the legend of Neapolitan comedy, Massimo Troisi, who starred in the cult film inspired by the life of the poet Pablo Neruda. Elsa Morante is also well known on Procida because of her novel L’Isola di Arturo (Einaudi) and the following passage: “Ah, I would not ask to be a seagull, nor a dolphin; I would be content to be a scorpion fish, which is the ugliest fish in the sea“. Ah, speaking of dolphins, did you know that Procida is home to one of the most recognised colonies of dolphins in the Mediterranean?

Nestled with the island of Ischia to the west and Capo Misseno to the east, the marina offers almost all the main services: mooring assistance, divers, waste collection (important), 24-hour surveillance, toilets and showers and more, including fuel at the quayside opposite the entrance to the commercial harbour. The VHF channel is number 6, and in high season it is advisable to announce yourself at the marina to moor without any surprises (tel. 0818969668). The marina offers 491 berths for boats up to 30 meters in length and 3 meters in draft. The marina is located 17 miles from Sorrento, 30 miles from Amalfi, 30 miles from Positano, 128 miles from the Aeolian Islands in Sicily, 207 miles from Porto Cervo in Sardinia, and 217 miles from Porto Vecchio in Corsica.

Chiaiolella (GPS 40° 44′ 73″ N – 14° 00′ 44″ ) is a marina well protected by two piers to the west and east. Managed by Yachting Santa Margherita, it has 80 berths for boats from 9 to 45 metres in length. The Marina offers all the main services, as far as refuelling is concerned, there is a petrol station at the quay, but this should be avoided for boats with a significant draught. The maximum draught at the quay is 3.5 metres, and there are electricity stations, water intakes and fire-fighting points. The prevailing winds are the mistral, south-east wind and the crosswind from the south-west. The nearest anchorage is Chiaia, opposite Ciraccio beach. This is perhaps the ideal place for a night afloat; the seabed is sandy, perfect for holding an anchor, and the water is transparent. Chiaia is well protected from the winds of the 3rd and 4th quadrants.

SAIM Group at Cannes, Monaco and Genoa boat shows: here is the range

Thermowell in Cannes and Genoa: air conditioning and sanitation systems