Rolex Giraglia 2020 cancelled due to COVID 19

Rolex Giraglia 2020, the queen of regattas has been cancelled

The Rolex Giraglia 2020 unfortunately follows the fate of all the other current events. The famous regatta was shooted last year in an amazing docufilm realized by the team of The International Yachting Media that take part to record, with the eyes of those who participate, the queen of mediterranean regattas.

The docufilm tells better than anything else, the unforgettable emotions that you live while “sailing the days” of this fantastic competition that, since 1953, has never been interrupted, even in case of adverse weather conditions.

The following doc is the press release that we have just received and that we report in full.

Due to the persistence of the uncertainties resulting from the COVID 19 pandemic, which has affected all aspects of life of our society, including sporting events, with particular regard to the guidelines issued by the Italian and French Government, the Yacht Club Italiano, in agreement with the Partners and the organizing Clubs, has decided to postpone the 68th edition of the Rolex Giraglia.

Scheduled to run this year from 5th to 13th June between Saint-Tropez and Genoa, the regatta will now be held from 11th to 19th June 2021. 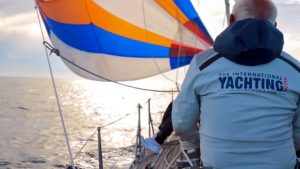 The decision made was unavoidable, in line with the numerous cancellations that have affected all sports at all levels, all over the world. Ensuring the health and well-being of the sailors, support personnel, officials and volunteers, continues, in this instance too, to be a top priority for the organizing committee.

Since its birth in 1953, the Rolex Giraglia has never been cancelled before.

The Rolex Sydney Hobart Yacht Race is the only other offshore race never to have been cancelled. Held for the first time in 1945, it has been run uninterrupted on 75 occasions.

14 different courses in 68 years: the alternating ports of departure and arrival of the Rolex Giraglia have been a defining feature of this event for several decades. A unique feature for any offshore race and even more so for a sailing competition born in the spirit of uniting through sport two countries that were in conflict with each other until a few years earlier than its creation.

In order to appreciate the understanding of all participants towards this inevitable decision, YCI would like offer some options in regards to the registration fees.

Registered participants to this edition will be able to either:

· Request the full refund of the registration fee;

· Donate the registration fee, in whole or in part, to the charity initiative in favor of the Hospital Ship organised by the Department of Health of Regione Liguria for the emergency COVID 19, providing assistance to hundreds of patients who have to undergo convalescence in quarantine click here.

The Yacht Club Italiano would like to thank the many owners and crews already registered for this year’s regatta, and sends you all an ‘arrivederci’ at sea to the 2021 edition.

The regatta is organised by the Yacht Club Italiano under the aegis of the Federazione Italiana Vela, of the Fédération Francaise de Voile and in collaboration with:

With the patronage of:

Contradictions and uncertainties for the forthcoming Boot Düsseldorf