A TRICK FOR A “SOFT” AND SAFE ANCHORAGE

Today, we want to update an article 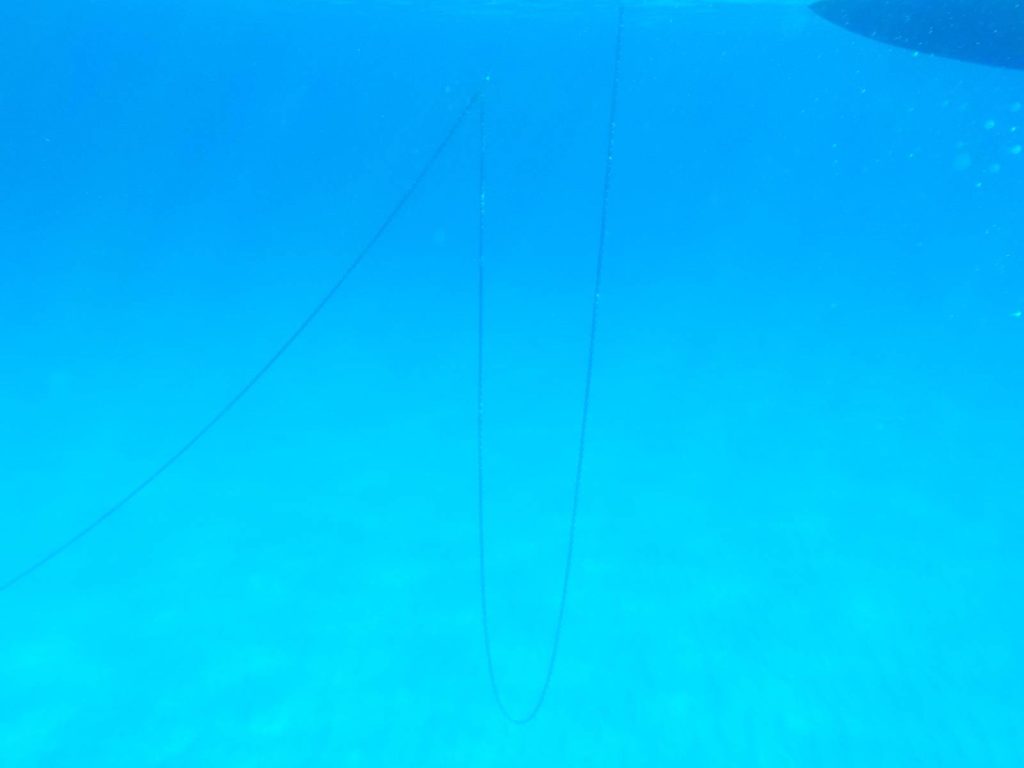 we published last year with a photo taken underwater where you can clearly see how the system works. We are still using this “trick” with great satisfaction.

The depth which the picture refers to is equal to 5 meters and the transparency of the water allowed us to frame everything.

As usual, the system works brilliantly. The anchor line is heavier and therefore safer under the same boat rotation range.

When the wind got fresher- in the picture there was about 15 knots – we noticed that the chain raised much more progressively and more “morbidly” from the seabed. The traction angle was smaller and therefore more efficient. When we are at anchor, especially if there are lots of boats, we cannot always use the amount of chain we would like because eventual rocks, shore’s proximity and depth often don’t help us.

Most of us use a system to unload the windlass from the traction of the anchor line, whether it is a Chain Clower like that one by Forniture Nautiche Italiane we use or any equivalent system (ours, it should be noticed, is really practical).

The trick – very simple – consists in using some additional chain after securing the chain clower until the chain touches the bottom, or almost.

In the picture below, you can realize how simple this anchorage system is.

Now, let’s see the advantages it offers in the case of an achorage on a 5-metre-deep seabed. If we did a traditonal anchorage, we will have dropped a chain 3-5 times longer than depth, in our case 20 metres. A 10 mm chain weights about 2 Kg. So, for any linear metre, considering a 20 Kg Delta, we have an overall anchor line of 60 Kg which is less than 21 metres long. when wind gets fresher, our anchor line will progressively raise from the seabed, since its weight determines the overall elasticity of the system.

When all the chain lifted, the anchor grip on the bottom comes into the play and the angle with which the anchor is stressed is essential to it.

With our system, which already has a lower traction point thanks to our chain clower, we used about 10 additional chain metres, equal to 20 Kg and, above all, to 50% more than the chain weight and 33% more than the total anchor line.

We used this system during our tests and we realized that the traction angle in gust was more favourable, our boat twisted and tended to tack less, with a lower overall risk.

The above-mentioned tests were carried our even during a mistral storm of about 30 knots during which we stayed safer and more comfortable.

We just need to thank my friend Marco Marchi who, once again, has proved to be a rich source of useful advice.

I’ve known Marco Marchi for a long time. He comes from Tuscany, he’s a sailor and racing man, an explosive mix if we consider he’s also an inventor and a tactician on competitive racing boats.

In the past, when we took part together to off shore races on my previous boat, we even designed some sails which didn’t exist yet, but that’s another story…

During our cruise, we met him and we spent some days with him. He was on Kryos, a Grand Soleil 37, the winner of many races in the last few years.

As always, Marco can teach us something and, this time, I noticed his anchor line. He taught it to me and he agreed to publish it. Maybe someone already knows this trick but most of our readers will use the occasion to make their anchorages safer and “softer”.