“Tropical” or “Caribbean” are adjectives used, often abused, to describe seaside places so beautiful that it feels like being in Cuba or Polynesia. Certain maritime glimpses of Sardinia, however, do no need any adjectives to be described: you say “Sardinian sea” and you’ve already made the idea.

Today, we’ll take you by boat to the Gulf of Orosei, following a very easy and relaxing itinerary from Arbatax to Cala Gonone.

Around 40 kilometers of coastline bathed by extraordinarily crystal clear waters and interspersed with bays so heavenly that they seem… Sardinian.

We leave the marina of Arbatax, one of the most popular tourist destinations in Ogliastra and the ideal starting point for both sea and land excursions (the wild Gennargentu plateau is just a few kilometers away).

While leaving the port, we cannot help but notice the famous Red Rocks, the imposing red porphyry and white granite cliffs that emerge at the entrance of the port as if to greet those who enter or exit the port.

After just a few miles, on the left, we find Santa Maria Navarrese, a very popular tourist destination and a crossroads for ferries.

After a few minutes of navigation, Sa Pedra Longa appears. This huge rock rises perpendicularly from the sea for almost 130 meters, among the most loved naturalistic attractions of the Baunei coast.

After around 30 minutes of navigation, passed Capo di Monte Santo (pictured below on the left), a long series of dream coves appears as real postcards to be sent to those who are convinced that the most beautiful seas can be only found abroad. 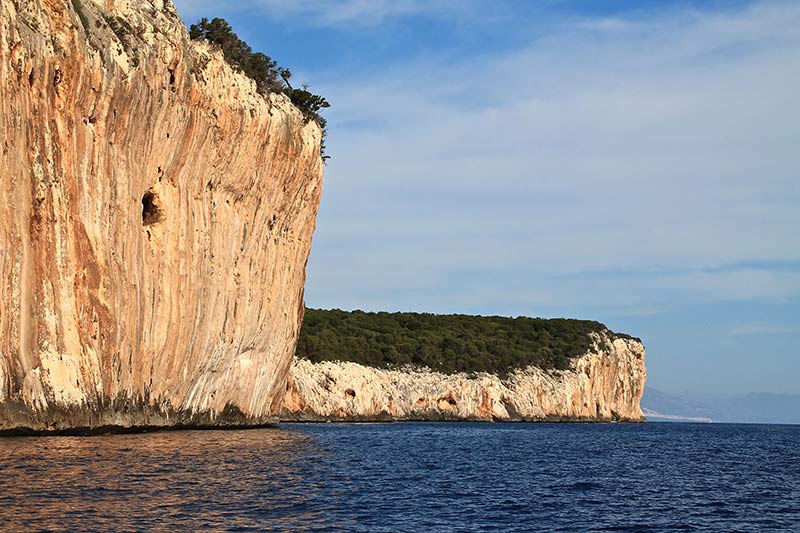 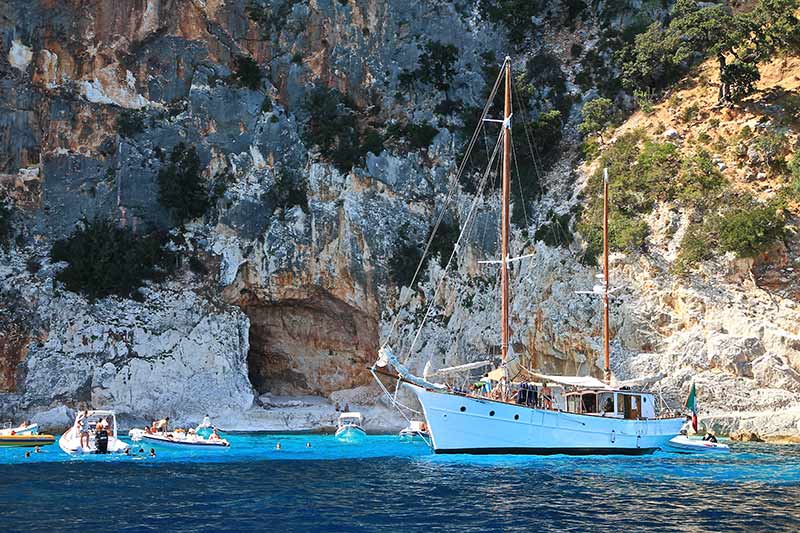 Sailing itineraries: the Gulf of Orosei and the treasures of eastern Sardinia

The first bay is Cala Goloritzé (pictured below left), dominated by the pyramid-shaped rocky spire of Monte Caroddi and inserted in an almost surreal scenario where sea and mountains come together in perfect harmony and the Mediterranean scrub finds one of the its maximum expressions.

The second one is Cala Mariolu which owes its name to the monk seal who lived in this area.

A not-to-be-missed stop for anyone traveling by ferry but even more amazing for those who have the possibility to get it directly on their own boat, Cala Mariolu is undoubtedly one of the most gorgeous bays in the world: nestled among impressive rocky walls more than 500 meters high that protect it from the wind, it looks like a large natural swimming pool where the sky is reflected in the transparent and emerald waters.

The Fig’s Grotto (pictured below on the right) is among the most fascinating marine coves in Sardinia. It hides many mysterious tunnels of a land millions of years old and opens ten meters above sea level along a suggestive limestone wall. Although the seabed near the cave, as indeed along the whole coast of Baunei, is rather deep, our advice is to moor at a distance and reach the cave by tender. 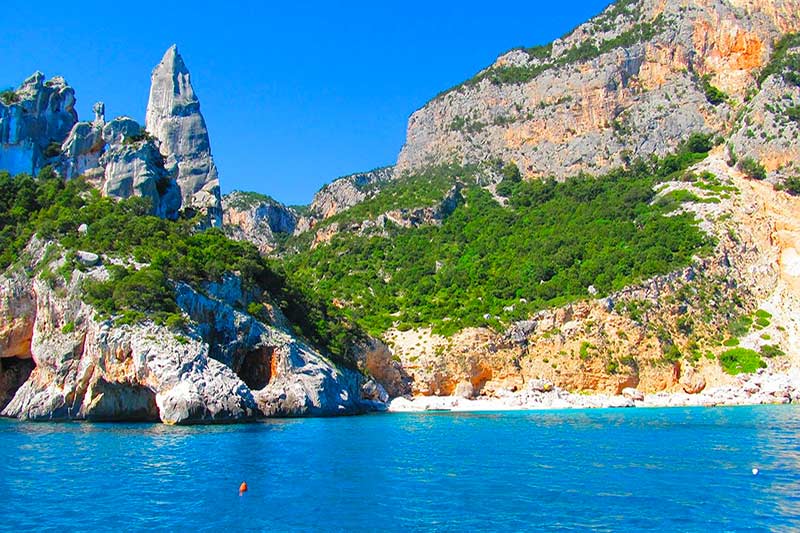 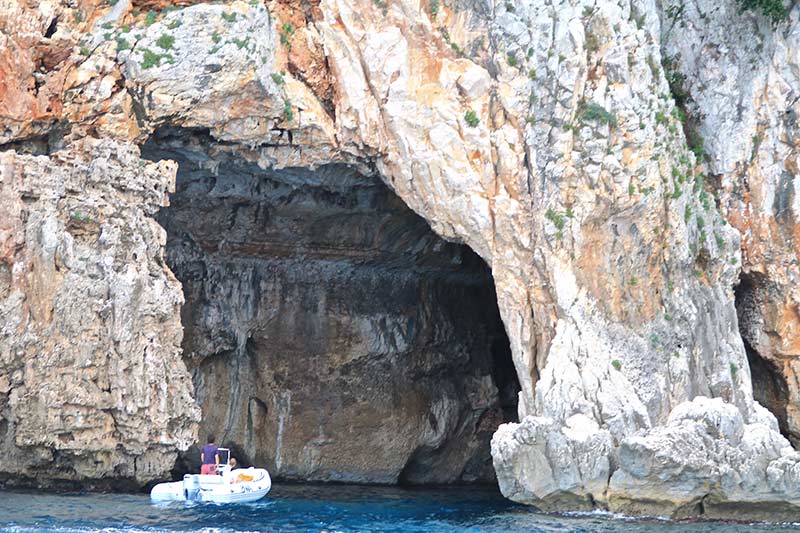 Cala Sisine (pictured below left), just over a quarter of an hour’s sailing, is one of the most spacious beaches in the Gulf of Orosei: 500 meters long, it insinuates itself inland for over 100 meters. The sand is stony and, due to its shape, it resembles an alpine lake, but the sea that opens up in front is turquoise and reminds you of being in Sardinia more than ever. 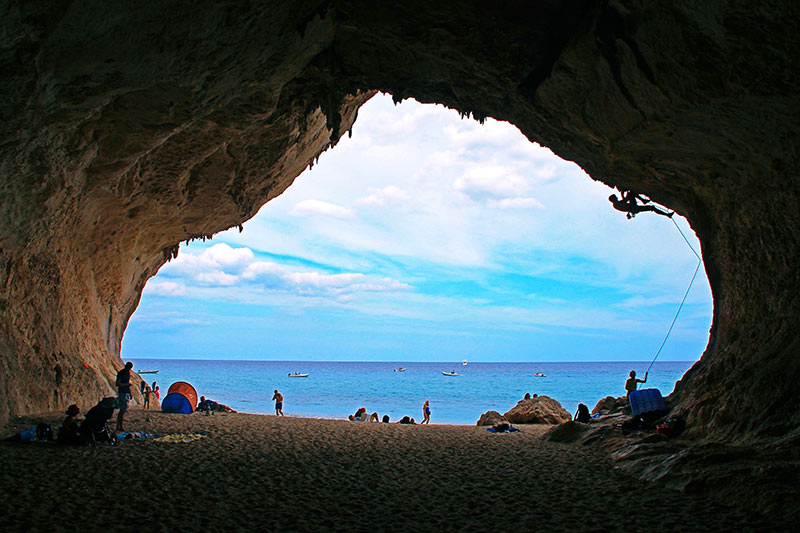 cannot fail to include a stop in the wonderful Cala Luna, considered as one of the most beautiful beaches of the Mediterranean and not only. A 800-meter strip of white sand and six huge caves that follow one after the other are all set in a natural context that cannot be more breath-taking.

Trekking enthusiasts can venture into the oleander forest that expands in the background, while the heavenly waters tell us that there is certainly the sea in paradise.

Before ending our tour in Cala Gonone, a very lively town in Ogliastra in summer with a beautiful marina, we can’t forget a visit to the Sea Ox Cave (pictured below on the right), which overlooks the sea through two large arches. 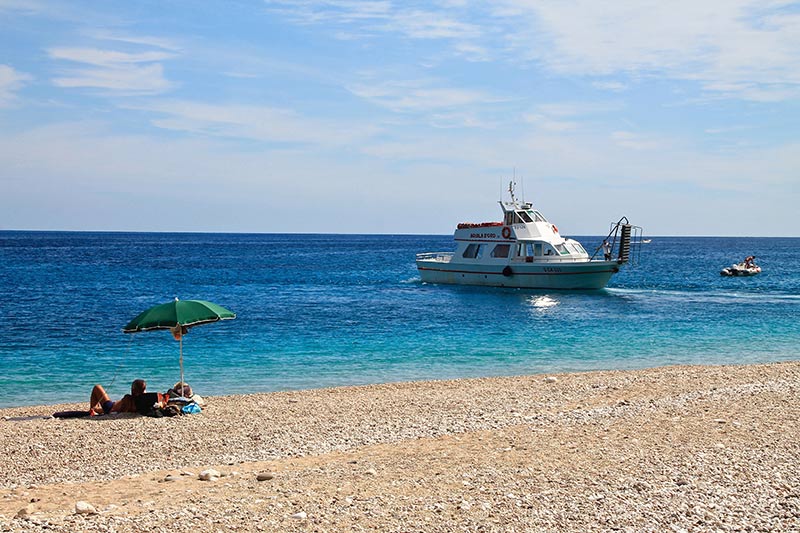 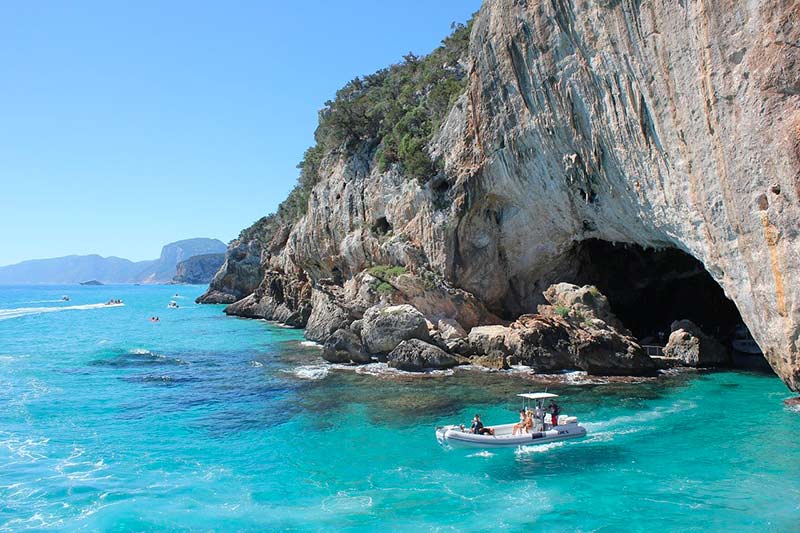 The grotto, 5 km long and divided into two branches, preserves numerous stallatites, freshwater lakes and underground beaches. As with the Fig’s Grotto, we recommend using an inflatable boat to get closer to the cave. For the rest, between dream bays and a truly breath-taking sea, enjoy these wonderful treasures in the Gulf of Orosei, on the eastern side of magical Sardinia. The Caribbean can wait. 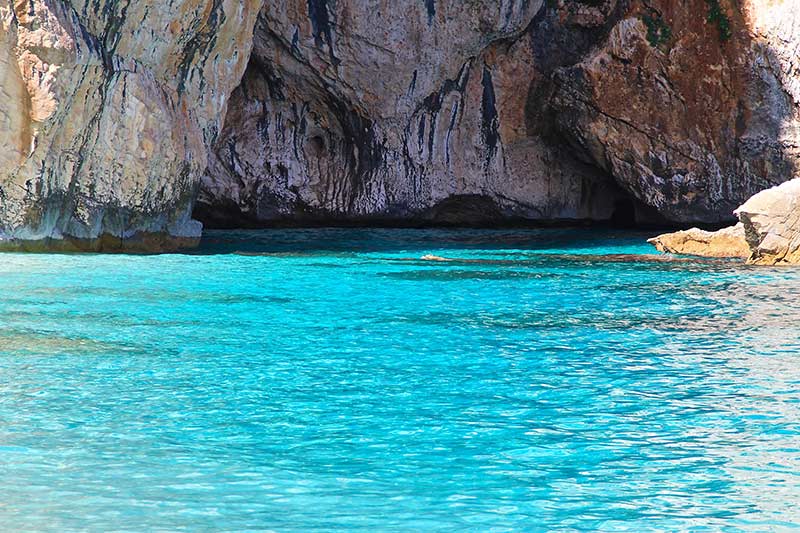 Read our sailing itinerary in the Azores

Pardo 38 : the “Baby in the family” is striking

Evo T2, much more than a tender: an authentic day cruiser