The first unit of the Senses 07 has been sold and, by early 2022, we will see the fibreglass hull mould ready. The new creature by Senses Yacht, without mincing words, looks fantastic just by looking at the renderings. Great design. At least as far as the exteriors are concerned, designed by Ceccarelli Yacht Design, whose pencil thought up the Senses 07 for displacement sailing at up to 15 knots and planing at around 24. Added to this is 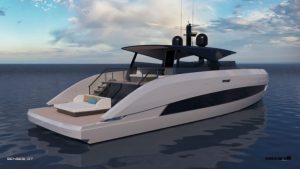 a truly superior grammar of interior spaces. The innovative positioning of the engine room (where two Volvo Penta D11 IPS 950 engines are installed) is located below the huge aft platform, which is also accessible through a hatch and, in case of emergency, from the saloon on the lower deck.

Sea, aft beach-area and saloon on the same level

The beach area is so large that it could be described as the apex of the lower deck. It’s also ‘ready to furnish’, it’s looking for furnishings and wants to be lived in. To all intents and purposes it is the terrace of the lower deck, where once the large sliding window has been opened it creates a unique space with the saloon. To get a clearer idea: imagine the terrace of a suite culminating in the sea just separated from the shoreline. The added value is that the owner and his guests can live right next to the sea on a single level. This is a rare combination of special benefits that are an exception to the competition. 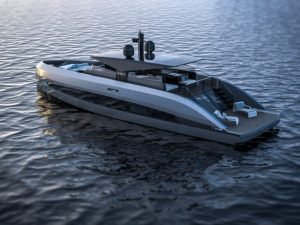 The spectacle continues and can be accessed from the two stairs leading from the beach area to the main deck. The latter is a strong expression of an intentionality that goes beyond fashion and is very daring. This is the principle of an open deck, but it can also be customized in a fully windowed cockpit version. But, as we were saying, the main deck is wide open because the idea is to offer a boat that offers an intense sail feeling while combining technical and aesthetic aspects in its profile, perhaps vaguely inspired by those of a trawler. The concept of the boat mediates between the relaxing pleasure of displacement sailing and the beauty of the wide deck lines that even recall those of a sailing cruiser. An ingenious combination. This can also be seen from the boat’s bow, and a closer look inside reveals the volume of a spacious deck, free of obstacles but well served with all the comforts the owner desires. The Senses 07 is the first project in a range conceived last year and destined to expand in size (and smaller). These are the rumours circulating at Senses Yacht, a project conceived by Mauro Corvisieri, former owner of Custom Yachts, who explains that he has envisaged “several versions” of the Senses 07 layout, with either a covered main deck or an entirely open one and three or even four guest cabins, all located on the lower deck. 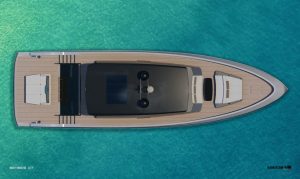 The Senses 07 sold has a superyacht DNA

What’s remarkable about this 70-footer is that the experience also brought by Custom Yacht has given it superyacht DNA and it’s ultra-customisable. 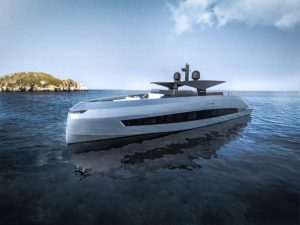 Mauro Corvisieri points out that the Senses 07 we’re talking about “is hyper-customiZed and will be delivered as early as October 2022”. The Senses that has already been sold has three cabins, all with en-suite bathrooms and showers. The owner’s cabin in the bow boasts a huge head that increases privacy. Designed this way, the cabin is totally separate from the crew cabin, which in turn has two berths. There are nine berths in total and the cabins all enjoy a flush view of the sea, which contributes to the great natural lighting. Yes, because even the deck offers light to the lower deck through skylights designed for this effect. For its part, the hard-top is large and well-balanced symmetrically in the stern and bow sections, and generates “filtering” volume through the windows below. But, we repeat, the actual idea is that of an ‘open’ boat to stay more in contact with the marine environment during the summer seasons. The owner likes her so much that he envisages her being used for cruises of 30 to 80 nautical miles in the Mediterranean. However, Senses 07 has been designed and equipped with technical features and autonomy that are also useful for longer cruises. Here are just a few of the features we would like to anticipate from the Senses 07 that will be sold: she will be equipped with a transponder for launching the tender, and she will not be fitted with a gyroscope but with a much lighter stabilizer in order to improve displacement by depriving it of at least 1,700 kilograms of weight. The whole project is purely Made in Italy and it would seem that the generators chosen are also Italian-made. But we’ll keep you informed as soon as we see the mould. 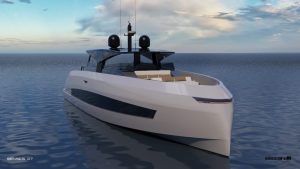