It really happened in the United States last July. A family was enjoying his favourite sport – offshore fishing – when something massive took the bait.

After a long hard fight against the fish, the line was finally returning the fishing reel. Here’s the surprise: the huge score the fishing family was expecting was not a tuna or a dolphin fish but a huge mako shark!

Image are a little bit shocking so we prefer to insert the link without the preview, if you like you can click HERE 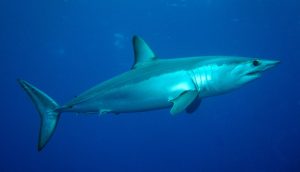 Probably in a desperate attempt to free itself, the shark approached to the boat and finally jumped out of the water and landed on the deck of the family’s boat. This species of sharks is, in fact, known for its ability to leap out of the water. However, episodes like this hadn’t never happened before.

In the clip, voices of the family crew can be clearly heard and it seems clear that they don’t know how to get rid of the inconvenient dangerous load.

The video shows the shark thrashing and twisting and finally getting stuck in the steel handrail of the boat, probably hold by line.

After a pause, the video cuts to the shark being lowered into the water and the crew cutting the rope to release back into its natural habitat, even though nobody knows the real conditions of the shark after the misadventure.

This type of shark is known not only for its size – the female shark can reach 4 metres in length – but, above all, for its impressive teeth. It is no coincidence that, in the poster of the famous Stephen Spielberg’s “Jaws” movie, the teeth of the white shark was replaced by the mako’s more terrifying one.

Images are quite graphic. As far as we are concerned, we don’t like seeing a fish, especially a shark, bleeding and fighting to survive. After all, the situation is clearly accidental and dangerous but, honestly, we wouldn’t know what to do in a situation like this.

We certainly won’t try to “unhook” the fish since putting hands in that mouth would be too dangerous..

COELMO AT GENOA BOAT SHOW WITH THE NEW INTEGRA PLUS SYSTEM