“Diamonds are the girl’s best friend”, Marylin Monroe sang. It was 1954 when the hot movie star bewitched global audience in her slinky fuchsia dress, adorned by a white-diamond necklace. After more than 60 years from the famous refrain, today, at Miami Yacht Show, it is the 40 Open Sunreef Power Diamond Edition that wears gold and diamond to enchant the visitors of the world’s most glamorous boat show. Indeed, the power catamaran – the smallest of the Polish shipyard – wears a special coating made of ethically sourced natural gem diamonds. It is named Sun King Diamond Coating and is the only coating in the world to be made of natural gems, developed by Jean Boulle Luxury in collaboration with Azko Nobel, a company with a very long experience in the field of paints and coatings. 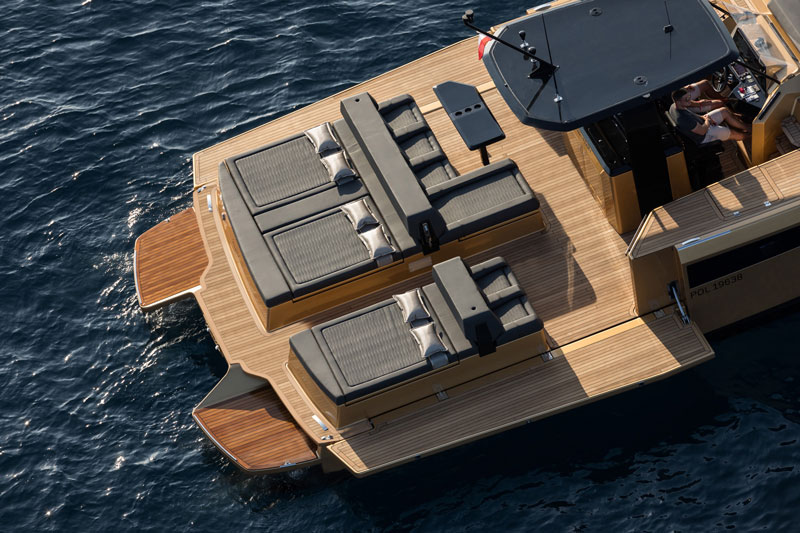 The new, and already award-winning, Sunreef  “Diamond Edition” has her world debut in Miami and is able to combine, within a length of just 13 meters, luxury, sporty lines and speed.

The project has been designed by Sunreef itself that, as you know, builds its own boats with great attention to details in collaboration with its in-house engineering and architecture department.

Comfort and spaces are abundant on board. Sunbathing platforms use the whole width of the cockpit, interrupted only by a walkway leading to an area equipped with sofas, tables and a convenient, fully-equipped wet bar. 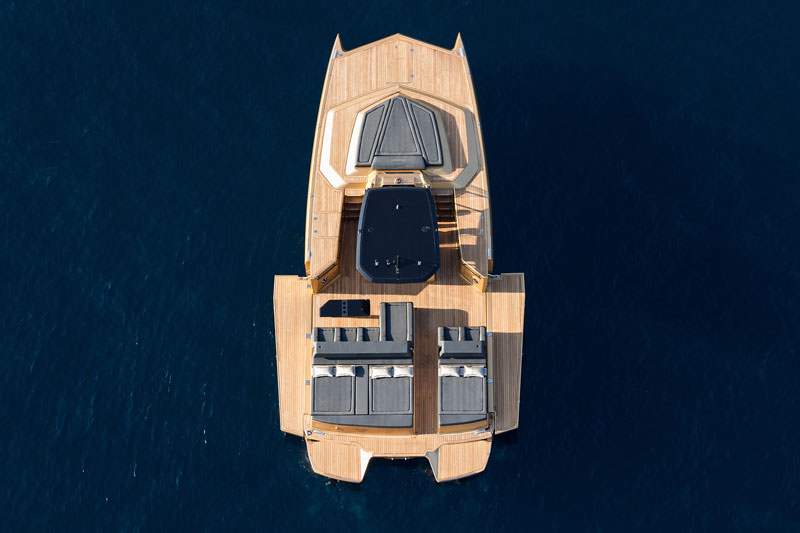 Sunreef goes beyond and gives the owner additional space. Indeed, the exterior aft section of each of the two hulls widens, using two opening side terraces that significantly increase the walkway while guaranteeing direct contact with the sea. Unlike common power-propelled catamarans, the focus here is non only on comfort and stability but, as you have certainly guessed from the appealing livery, the 40 Open Sunreef Power also looks for dynamism. Fitted with twin Mercury 860HP engines, she can reach a top speed of 60 knots. Ullman cushioned seats are maybe the confirmation of the sporty performances of the boat.

In addition to the diamond coating, customization options are rather unlimited on board and end only where the customer’s taste is fully met. According to the owner’s needs, the boat can be a pure open or, as in our case, the forward open space can become a double cabin. As for hulls, the starboard one accommodates the galley while the port one hosts a toilet. 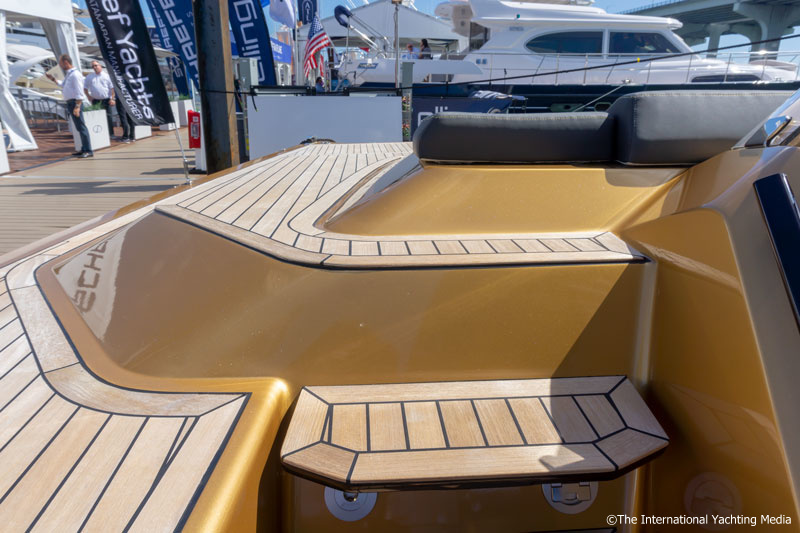 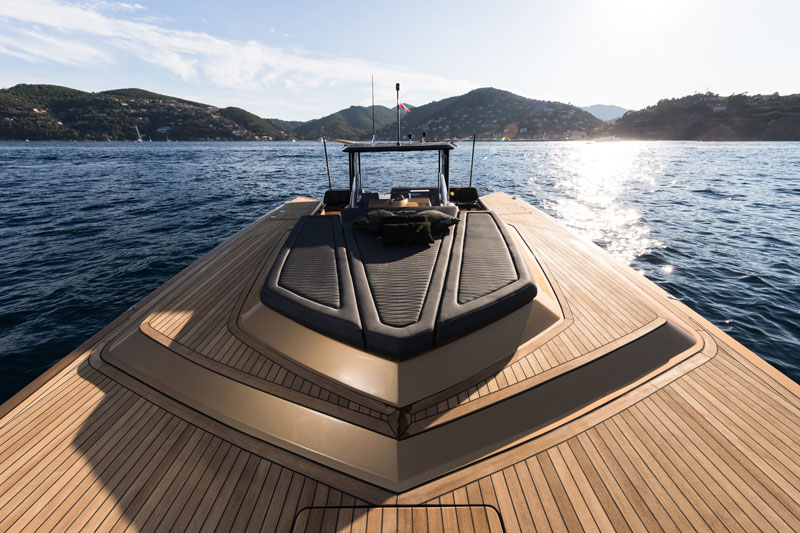 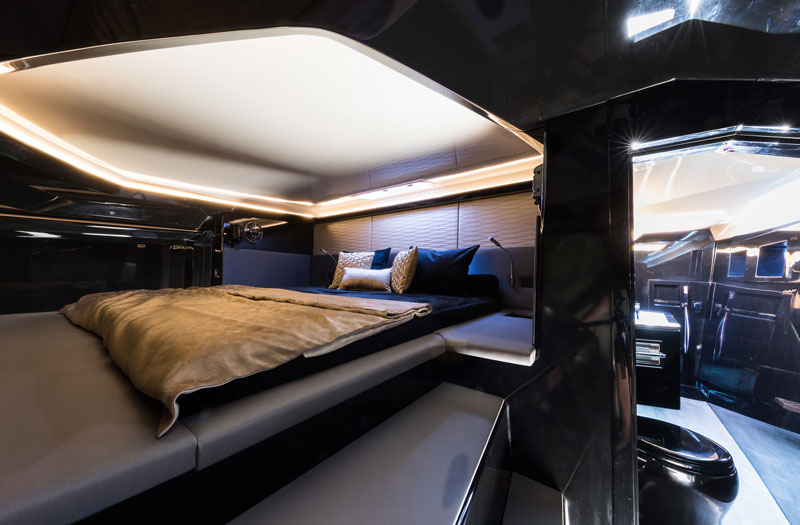 The effort of engineers and designers in creating a good headroom in the forward cabin certainly deserves special attention, if only for the play of inclinations on the bow.

The structure that evolves from the deck is characterized by the presence of diagonal lines which form two different steps. The upper one is entirely used as sun pad. Seen from the outside, the structure of the forward deck seems to reproduce the facetings of a diamond.

To be honest, despite its remarkable width, the master cabin is not particularly desirable for the night since it is windowless and without any openings on the outside.

Noteworthy is, instead, the bathroom that, very wide, occupies a good portion of the port hull. The shower is double and uses the whole stern of the hull. 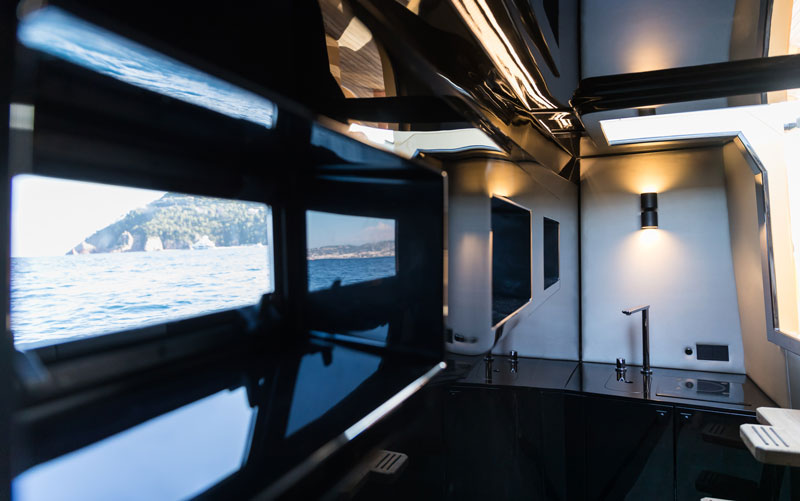 Finally, a final remark about the boat livery. The name of the coating –  Sun King Diamond Coating– is inspired by the works of the famous cabinetmaker André-Charles Boulle, active under the reign of Louis XIV, better known as ” Sun King”. Monsieur Boulle became ” king’s cabinetmaker” in 1672, making wonderful inlay works with golden brass and tortoise shell.

That’s how the 40 Open Sunreef Power Diamond Edition can have the honour to wear a “royal livery”.

Ice Boats: sailing on the ice