Situated on the top floor of a glass building in Via Nuova Marina, suspended between the sea and the sky of Naples, raises Victory Design, the naval architecture firm and creative kingdom that the virtuous Brunello Acampora has been running for almost 30 years.

Over 300 square meters of crystal overlooking the gulf, where the glass of walls is combined with the white marble of floors, electrical and lighting wiring cascade over desks while the cold neon lights and spotlights bounce of the yellow hulls of the scale models anchored in the ceiling, giving the surrounding space a warm familiar light. “Creativity is the answer that opens”, I once read on the pages of an old university book, and, indeed, at Victory, everything seems to be open, including offices that, separated from each other by glass walls, never close.

Founded in 1989 in Turin, Victory Design initial core activity was the design and development of race boats, Class 1 catamarans, offshore and fast monohull models. Over the years, the firm progressively changes by the will of Brunello Acampora, developing a considerable multidisciplinary approach. This is why, when the landlord, with his usual kindness, invited me in his studio, I shook hands with engineers, architects, designers and my gaze traveled from a screen to another, capturing the most various pictures. Sketches of boats, yachts, superyachts, tenders, hulls as well as complex designs for propulsion and high-tech naval control systems, supported by the technical explanations of skillful engineers.

” Victory Design starts from a yacht design firm which

always and constantly remains at the centre of our concern; however, during all these years, we have also explored almost every sector of design”, Brunello told me ” Victory arises from the will to do yacht design, in the most Italian- Anglo-Saxon sense of the term, since Anglo-Saxons have been clear-headed enough to theorize the concept of total design for a very long time. The figure of the yacht designer is a little bit like the industrial designer’s one because it can’t just spread some style on a functional skeleton but it should have a 360-degree view of the product.

The most original aspect in the work of the Neapolitan studio lies in the ability to manage the whole planning phase, from specific technical aspects like hull, propulsion system and structural sizing to the formal and stylistic definition of the yacht, superstructures and interior design included. This ability results from a precise entrepreneurial choice which considers it impossible to innovate without a close monitoring of all the main parameters of the project. Debunking the erroneous belief that the designer’s creativity is confined to a mere stylistic exercise, the same cannot ignore the commercial logic to the rails of which it is firmly attached.

” Design is to business as aerodynamics is to physics. If an airplane does not feature good aerodynamics, it will not fly thanks to the lays of physics; if a product does not have a good design, it will be not successful in sales terms. The perception of the product, seen from an aesthetic, tactile and volumetric point of view, is essential in a market whose purchase driver is almost purely emotional”, said Bruenello while my eyes were inevitably slipping beyond the large windows to stop on the severe profiles of the commercial ships sleeping in the port. “What charm!” I thought to myself. Sticking my head out, my gaze bowed in the presence of the majestic Vesuvio and interviewing Brunello Acampora became a travel to the islands of the Neapolitan archipelago, on board a boat wearing one of his hulls.

And the hulls are just the elements that have made the Neapolitan designer and his Victory Design distinguished in the worldwide yachting scenario. Their pencil redesigned the hull of the Cigarette “The fantastic 1”, a legendary motorboat designed for the Powerboat 1 world championship.

The Arcidiavolo, too, generally considered as the first Italian concept boat, bears the signature of the Neapolitan studio. The “inverted tricycle” hull, invented by Sonny Levi in the ’70s and re-interpreted by Victory, has been universally recognized for some specific qualities that deserve to be applied in both the recreational and racing sectors; the result was in fact the GT and the GTS (racing) line.

” Believing that a hull means nothing is a derogatory act toward the final user. The hull of a boat is the equivalent of a building’s structure: the fact that it is commensurate with its function is taken for granted. But we shouldn’t take it to the extreme because we can’t buy a boat only because it has a good hull. However, this is a good starting point and we assume that boats should have an excellent hull. If your goal is to establish a relationship of loyalty with your customers, if you don’t start from a good hull, you will probably sell one, maybe two boats but the third one will remain just a mirage”. When Ferretti Group asked him to design the Mochi Craft’s Dolphin Line, the success was global and it was just the Italian “Lobster Boat” that helped Moki to reposition itself on the market. ” I’m in contact with many loyal boat owners still today, I don’t know anyone who has had only one Dolphin boat” concludes Brunello with great satisfaction while he let his eyes stop on the Dolphin mock-up on the desk.

Victory Design is a sp 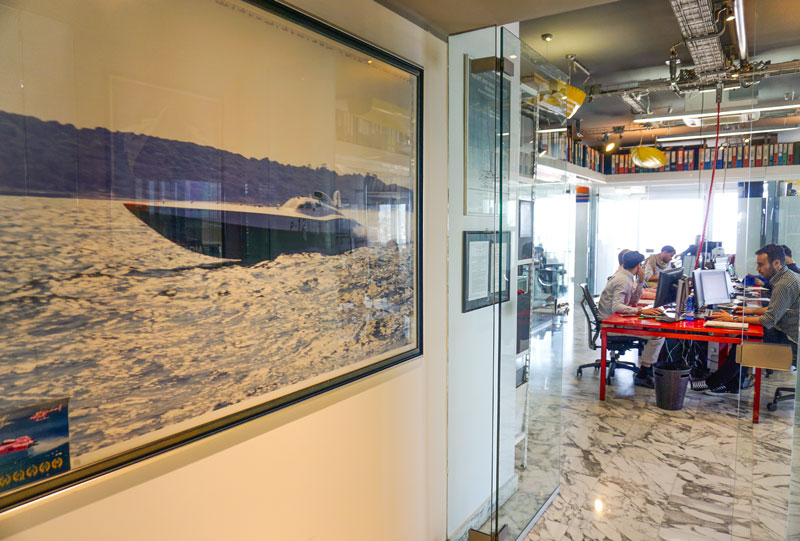 ot without space or time, where innovation doesn’t turn its nose up at tradition and where engineers, architects and designers are constantly committed to studying the best solutions to make history communicate with the future of yachting industry. Talking of future sounds good; until recently, we were obliged to show a wounded dying yachting industry which only addressed to the “experts” of the sector with an overturned smile, asking them to supply an “anti-crisis pill”. I’m not an economist but the figures and percentages I see and read are growing fast, I take not of them and I enrich the pockets of my knowledge but I prevent myself from transmitting them because they not belong to me. Instead, what belongs to me are the histories that I’m told and that I try to filter with a slight critical spirit. The history of Victory filtered by the memory of designer Brunello Acampora is the history of a large family of engineers, designers and architects that design, conceive and build the future of navigation, with innovative mindset and confidence in the next future.

” I would like to build a boat bearing the Victory Marine brand, absolutely not in competition with nobody because it’s a boat that does not exist on the market. It’s a boat designed for a specific generational target. For end users who don’t like the formal aspect of RIBs but prefer practicality; for all those who like the formal aspect of boats but don’t tolerate neither the price nor the lack of practicality. Today, the possibility to interpret the “travel time” as ” holiday time” does not exist. The concept of inhabited travel is still not widespread. Speed is a human emotion but the concept of travel is unique and is probably that pleasure of navigation that sailors know but motor boaters don’t. There must be a contamination between these two worlds”. Thus ended my travel in the world of yacht design. Reluctantly, I left the studio and the last picture my eyes captured was: designer Brunello Acampora seating on the arm of his office, lost in the sea of memories that our conversation had evoked, and browsing Sonny Levi’s  “Milestones in my Designs”.

Massimo Guardigli, a life for boating and the new course of catamarans

Greenline Yachts, behind the scenes of an innovative boatyard

Mercury V8 and V6. A quantum leap to another dimension for the Mercury Marine outboards. Comparative test