Now that the Cannes Yachting Festival is over, it’s time for reports. The nautical festival on the Côte d’Azur, which returned after a two-year absence due to Covid-19, certainly confirms the figures of the last 2019 edition. Albeit slightly downwards: 7% fewer visitors and 4% fewer boats. The totals show 575 exhibitors, 620 boats and 54,400 visitors from all over the world. But the most interesting fact is that there was a 10% increase in world premieres, with 141 boats on display. Here is the key to the sector’s absolutely rosy prospects. The novelties of the “fresh” boats, either just launched or about to be launched, speak of an incontrovertible symptom: boatyards want to dare. By presenting new technologies, designs and layouts. Or by growing and investing in bigger projects and boat types.

A complicit factor in this growth is also the pandemic which, according to analysts, stirs up capital and introduces a crisis, but also opens up opportunities. The numerous lockdowns have stimulated an over-shopping process, and many are reviewing the way they spend their holiday time and with which recreational vehicle: the yacht is undoubtedly the most coveted. And many of the shipyard managers we met at Cannes are reporting production figures and boat orders that have tripled.

Cannes was the litmus test, because its dates (September 7-12) anticipated the other boat shows that will follow immediately in Genoa and Monaco. The signs are important. Everyone has talked about the weather, which is wonderful and warm, but unfortunately it will not be as warm in Genoa, almost certainly. 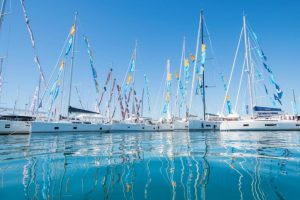 The sunshine over the French Mediterranean was a plus, but there was also one demerit, and that was perhaps a bit of “logistical” confusion, with few salespeople available to help visitors during the festival and an almost non-existent refreshment service. But there was plenty of champagne (from the boatyards). And, we must emphasize, the idea of separating the Show into two parts – the Vieux Port, with motorboats, and Port Canto, with sailboats – was truly ingenious. Because it combined the whole, the atmosphere, with a very short but consistent sea leg.This way, Cannes honoured the marine environment at all times. And the boat show became ‘experiential’. Some shipyards also made their yachts available for shuttling between the two ports, which was an extra opportunity to promote themselves to visitors. Lots of super yachts, and the VIP helicopter never stopped flying throughout the Festival.

Cannes Yachting Festival Director Sylvie Ernoult said: ‘Our – ambitious – goal for this boat show prepared during the Covid period was to match the 2019 edition in terms of number of exhibitors, boats and visitors’. She succeeded well. Moreover, according to figures reported by the Festival Communication Office, 50% of visitors came from abroad ‘to admire the best of the French and international offer’. As this regard, Made in Italy boating was the star, as the Italian yards were in the clear majority not only in terms of numbers but also in terms of the number of boats on display. Spanish and Dutch boatyards were also present, but in small number. But let’s not get hung up on nationalities, because the funds contributing to nautical production are global. And again, congratulations to the Festival organizers who, as they explained: ‘it was a real challenge in every phase of its preparation, taking into account the new organizational constraints’, imposed by the anti-Covis regulations. Undoubtedly, the “perception” of the Festival, to everyone’s delight, was summed up as “motivation, enthusiasm and growing impatience to meet again in Cannes”.

The “Charisma” of the 56 FLY, new Absolute Yachts’ project unveiled

Cantiere del Pardo, the new Grand Soleil 72 will be offered in the “Performance and Long Cruise” versions

Astondoa As5: world premiere in Cannes

Pirelli 42: the devil and the holy water. An unforgettable super test