DeepSeaker: above and below water with zero emissions

A futuristic boat with which it will be possible not only to speed through the water at 30 knots, but also to dive and enjoy the wonders of the seabed. All without polluting the environment, thanks to electric propulsion. What until a few years ago might have seemed only a dream or a hypothesis about a very distant future is now becoming reality thanks to DeepSeaker DS1, the hydrofoil-submarine designed by the Italian innovative start-up iSpace2o, which has announced the official start of production.

The milestone was made possible by substantial funding from Invitalia and the start of an industrial collaboration with William Gobbo’s Sealence, which will supply the electric powertrain to the jet. The stylistic lines of the hull, on the other hand, are signed by the Giancarlo Zema Design Group studio, while the construction and fine-tuning of the craft will be handled by Blaze Performance, the Formula 1 H2O team. 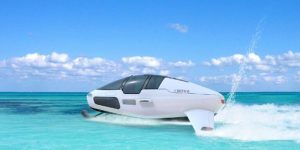 The DeepSeaker DS1 was originally conceived as a range accessory for the on-board toys of super yachts, but its developers recognized its enormous market potential also as a stand-alone nautical tool, with which to organize, for instance, evocative underwater sightseeing trips to archaeological sanctuaries under the coast or to admire the great coral reefs that already offer incredible spectacles of underwater nature in just a few metres of water. Again, if we think of the large aquariums scattered around the world, by equipping themselves with DeepSeakers they will be able to offer their visitors a breathtaking and immersive experience. It is no coincidence that the first ten DeepSeaker units have already been optioned by one of the largest international shipping groups, which will use them as a means of entertainment for passengers on their cruise ships.

The characteristic feature of the DeepSeaker is to guarantee maximum safety for passengers on board while at the same time respecting the surrounding environment. In fact, engineer Giuseppe Carusi, CEO of the start-up iSpace2o, explains: “The technology is now mature and this kind of boat is becoming increasingly popular around the planet . Thanks also to its industrial partners, iSpace2o has the ability to position itself at the apex of this market thanks to a very high level of technology and a unique design, elements that are not always found in the products of its competitors”. iSpace2o is thus becoming another Italian company whose goal is to change the way people go to sea, always with the utmost respect for the ecosystem.