On Test. Evinrude E Tec G2 150 H.O. : great power and low consumption for the lowest emissions of the market

One of the most common 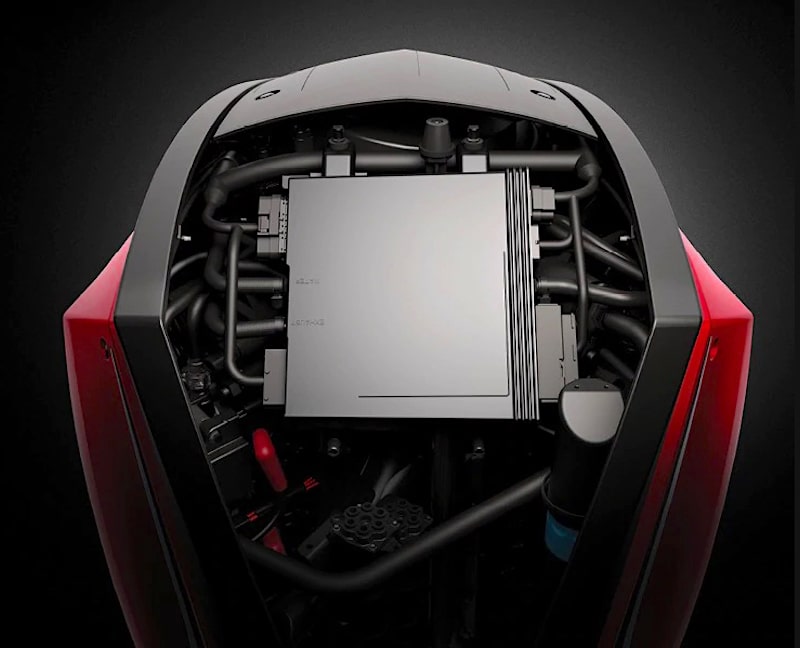 Fitted with the advanced E-Tec technology, they use a computerized management module to control direct fuel injection thanks to which the fuel/oil mix is delivered into the cylinder with absolute precision.

The result is that these engines are classified as the world’s cleanest ones.

However, the list of the innovative elements goes on; the pistons of the Evinrude E-Tec are, in fact, made of a special aluminium alloy developed by NASA that guarantees excellent  wear resistance and greater stability at high temperature. 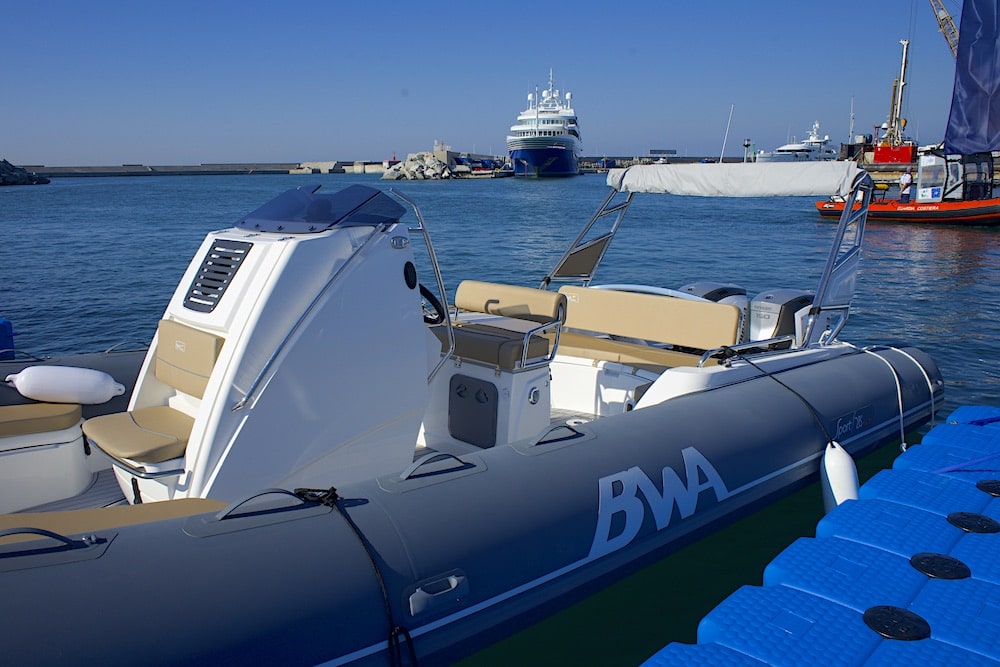 It is therefore not difficult to imagine that we couldn’t get out of a test that, during the Genoa Boat Show, we carried out on board a BWA 28 Sport fitted with twin Evinrude E Tec G2 150 H.O. outboards for the occasion.

For all those who, like me, have been sailing on a inflatable boat since they were born and have grown up around two-stroke engines, the main question to answer is only one: ” are these new high-tech two-stroke engines really able to give the typical emotions of traditional two-strokes?”.

With these premises and tools in our hands, we therefore climbed on board and started engines. Here is the report of our test.

The BWA 28 Sport where we are 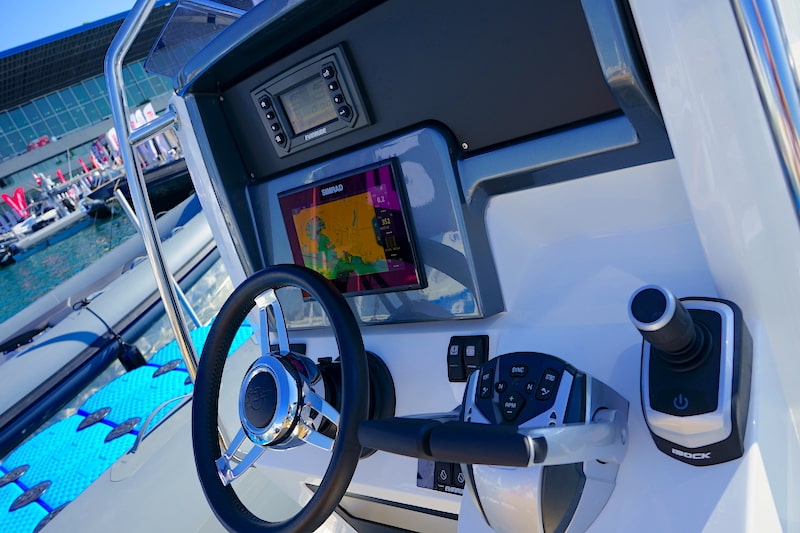 is a “walk-around” with an excellent pedigree; speedboat tradition and inflatable boats building strongly run through the veins of the Breventani family, well-known for the building quality of his rubber boats for decades.

Sure, we would have preferred to have two 200 HO engines but, all in all, the two tons in running order of this boat are good enough to test the 300 horsepower delivered by the twin E-Tec 150 engines we have at our disposal.

Our equipment is very complete and an Icon Touch 4.3 CTS display shows us a multitude of data, all coming in real time from the computerized control unit of the engines. 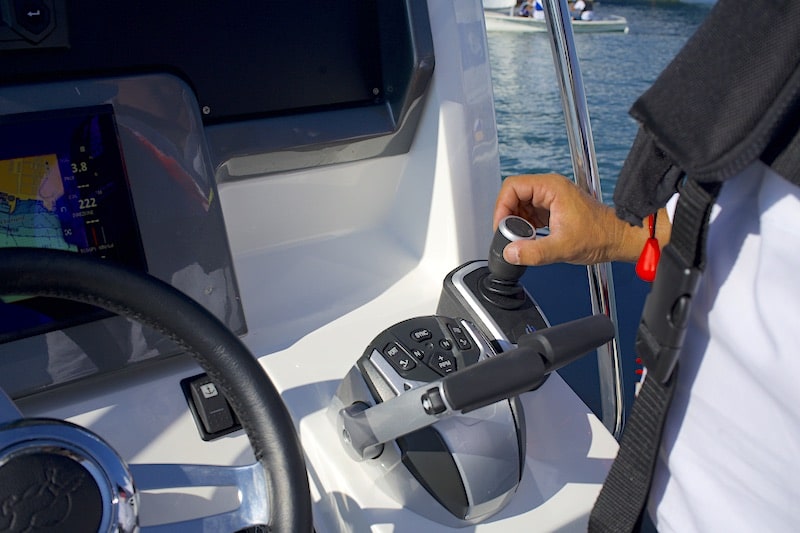 The equipment is completed by the electronic Icon II Premium throttles and the famous IDOCK joystick that is a real piloting system.

It’s exactly on it that I rely our exit from the berth. With the throttles in neutral, I push the start button and I put it at 45 degrees and back to leave the berth. The gear engagement is very silent and soft, the boat moves away from the jetty without difficulty, despite the waves provoked by the constant passage of boats.

I perform some maneuvers to test the control, including 360-degree turns and lateral movements, trying to get the system into trouble but, totally undisturbed, it goes on acting excellently. I put the bow in the direction of the exit and push the lever forwards: the BWA 28 accelerates gently while I adjust the speed without any problems.

Out of the port, I 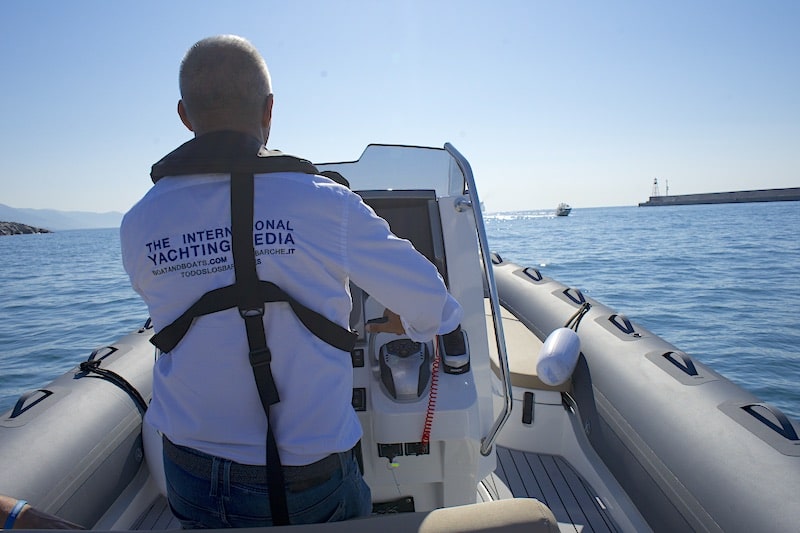 push the joystick forwards and the electronics limits the speed to about 6 knots. With a slight rotation of the knob, I can steer the boat efficiently, the IDOCK successfully replaces both throttles and the steering wheel, passing the test with honors.

Now, we’re out of the port of Genoa and the silent mumble of the two Evinrude draws my attention. I turn the electronic system off and opt for the electronic throttles again. It’s time to crank up.

Postponing the conventional “accountant’s” measurements, I select the Sync mode and step on the gas to get the boat on plane. The two Evinrude react in a heartbeat with a torque I didn’t expect and, within just one bit, we travel at 20/22 knots. The BWA 28 has already its bow low and I smile while foretasting the adrenaline of the test. 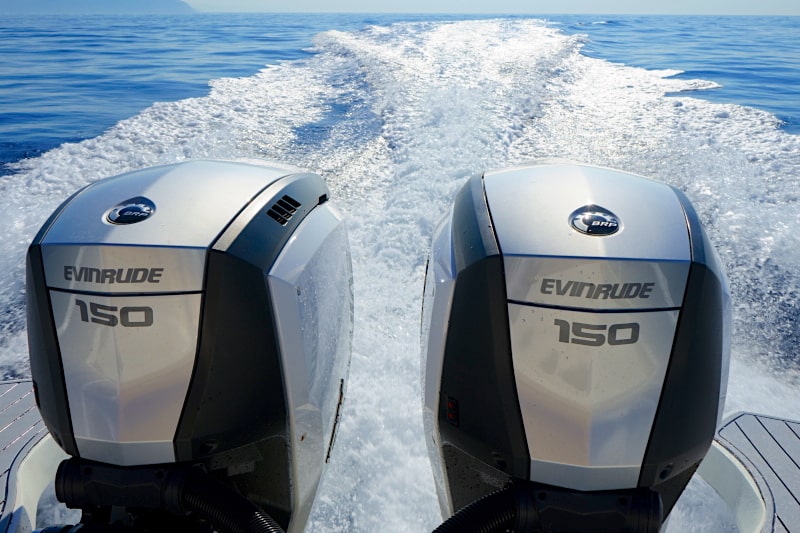 I keep on accelerating and the sound of the two E-Tec 150 drowns out the noise of the air while the instrument displays increasingly interesting figures. At 30 knots, I take a look at the devices and open my eyes wide: we’re using less than 30 liters per hour, which means less than two liters per nautical mile: really amazing!

I slow down. Now, it’s time to collect data, these engines deserve that. Supported by the electronic rpm adjustment system, I write down speed and fuel consumption levels and, again, I’m astonished. At an excellent cruising speed of about 20 knots, fuel consumption is great: with little more than 10 liters of fuel, consumption is just 1.3 liters per nautical mile.

Despite the overall displacement of the boat, the maximum speed, too, is excellent: 43.7 knots, with a fuel consumption of just 2,26 l/nm. These engines are actually special and we want to see how they act in acceleration.

So, I stop the boat 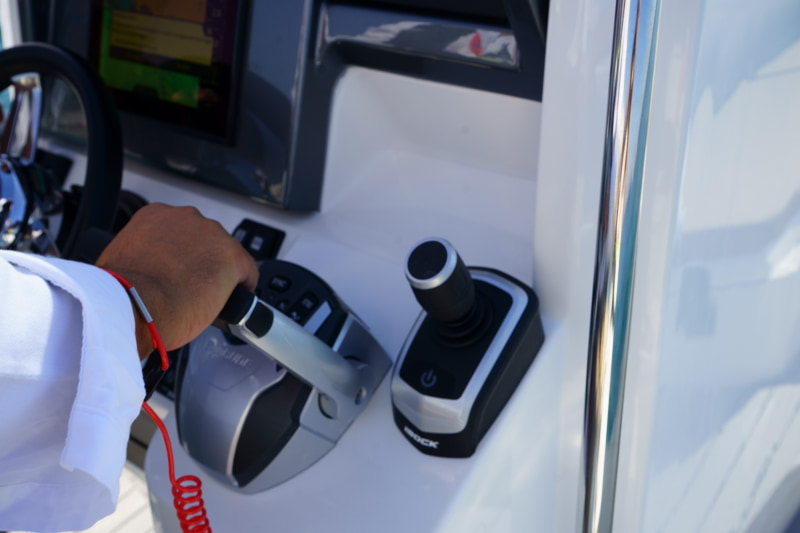 and take my chronometer; then, I push throttles down and I’m pushed back with a brutal force, the torque of these engines is exciting. Within just 16 seconds, we touch a speed of 30 knots, accompanied by an intriguing sound that I would call “lamellar” and that stimulates the production of adrenaline.

During our tests, the BWA 28 Sport navigates perfectly, safe, sturdy and with a good route stability. While we’re at it, we try to perform some tight turns that, in addition to giving us the opportunity to test the boat, also enable us to test the elasticity of these two Evinrude E Tec G2 150 HO engines.

Just to give you an idea, when we go out from a tight turn at 25 knots and push throttles down, we receive a crazy push that, within a second, makes us sail at over 35 knots. A really great performance!

We keep on stressing the boat and its engines; finally, the cruel time forces us to come back and, with the help of the joystick, we return to our berth without any problems. 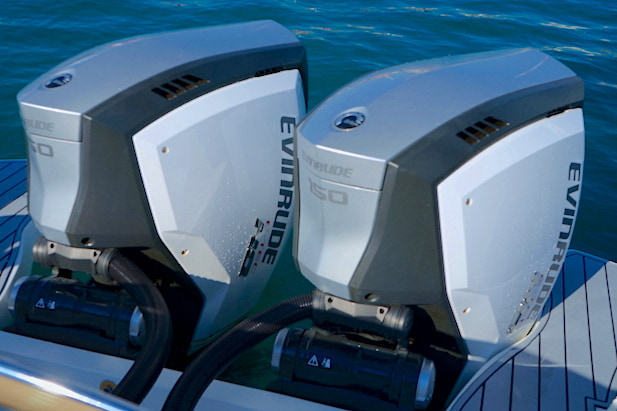 These engines represent a real leap forward. Powerful, elastic and fitted with an exciting torque, they successfully combine all these features with extraordinary running costs. The electronics supplied by Evinrude for these engines is high-level and the IDOCK system makes everything very easy and efficient

What’s the only flaw of these engines? Undoubtedly, their name. Considering the torque which they are equipped of, it’s faster to go from 0 to 30 knots than to say ” Evinrude E Tec G2 150 H.O.” !