Explorer 62, the revolution in the explorer yachts

Just by looking at it from the outside, one can sense its extraordinary stability and the immense space offered on board, but stepping on it the sensation is even more incredible. The feeling that Explorer 62 offers anyone who sets foot on it is that of a yacht that is radically different from any yacht ever seen before, one that has already revolutionized the standards in the yachting world in a way from which there will never be a return: we are in fact in front of an open space yacht that at the same time gives a solid feeling of safety, with an intelligent and extremely accurate study of the spaces and a genuine sense of design; a true floating home that gives an infinite feeling of contact with the sea. Explorer 62 is a yacht with a distinctly Teutonic personality, with rigorous and functional aesthetic lines that have immediately made their mark on the industry. It is no coincidence that in the year of its launch the boat won the prestigious ‘Best Layout 2021‘ award assigned by World Yachts Trophies last September at the Cannes Yachting Festival. 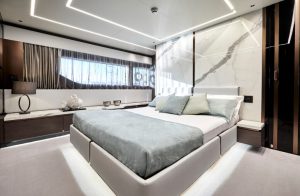 Designed by Davide Cipriani of Centrostiledesign and built by the Explorer Loy shipyard, managed by Riccardo Radice with Günter Neumann and Ferdinand Dorn, Explorer 62 is an incredibly comfortable and convenient yacht, with interiors that give the idea of being aboard a much larger craft than 62 feet, both for the clever exploitation of the hull and thanks to the windows that offer a 360-degree view of the sea, extending the yacht’s dimensions beyond its own limits. But above all, what is most impressive is the sensation of strength and cruising stability: both when moored and when underway, Explorer 62 has very little oscillation, almost as on dry land, thanks to the scrupulous weight balance studied down to the smallest detail, combining technical innovations with design. Its balance is a characteristic that can be perceived even when the yacht is stationary, and seems to be on dry land rather than moored at the quay. 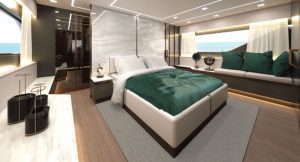 The emblem of the skilful design and construction technique of the Explorer 62 is in the master cabin (in the photo), placed in the heart of the boat to exploit its maximum beam: the headboard of the king-size bed is a large, two-tonne slab of white marble that has the dual purpose of adding weight to the centre of the boat to reduce its oscillations and of giving an idea of light, and therefore of greater interior space, thanks to its light colour. But this feeling is limited to entering the cabin, because instead while we are in bed to sleep the marble will remain behind us and in front of us we will have a black wall, more restful for the eyes during the sleeping hours. Of these features, of which we have described just one example, the Explorer offers them in every corner; from the tank located in the centre of the hull, again with the aim of maximizing stability, to the original and practical shading system on the hard top inspired by the Venetian blind system. Also on the hard top is a huge double sundeck that offers a breathtaking view of the sea and is perhaps the most exciting space on the Explorer 62. In general, the upper deck is an environment that invites a thousand uses, from lying down to relax to playing music and dancing with friends. Whatever the case may be, in fact, we feel we are on board a hospitable, cuddly and safe boat, an immense open space full of comforts to spend the long cruises to which this vessel invites us.

As soon as you 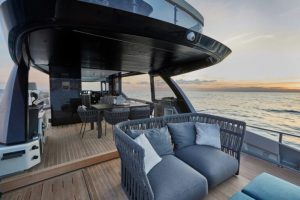 step aboard the Explorer 62, the feeling you get is extremely pleasant due to great attention to aesthetics, the abundance of space and the extreme quality of the materials and finishes. All this is combined with a high feeling of safety, which is not usually encountered in open space yachts, but which in the Explorer 62 is an intrinsic feature that is noticeable in both closed and open spaces, thanks to touches such as the rather high handrails at the bow or the handles to hold on to in the most difficult passages. This combinaIn addition to the master cabin we have already mentioned, the Explorer 62 also has a double VIP cabin in the bow and a third guest cabin with two beds side by side, each with its own spacious washroom in which the showers are generous in size compared to market standards. Below deck there is also a clever fourth room that can be used as an additional single cabin or as a simple pantry.

This combination of elements is literally conquering owners: in the first days of the last Venice Boat Show alone, where we saw this and other boats, Explorer sold three units; and at this point we can’t wait to admire the next 78-foot model, which the yard plans to launch within a couple of years, confident that this yard will continue to revolutionize the standards.

Andrea Razeto, Icomia and the global goals of the boating industry