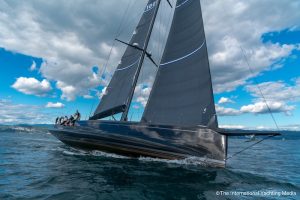 It’s called GS 80 Custom and it’s the very first of a new series of boats that Cantiere del Pardo wanted to offer its owners a high level, custom and semi custom yachts, up to eighty feet in length.

Able to amaze by introducing superbly beautiful boats, when this shipyard launches a new line of boats, it literally shakes the market.

On the other hand, all you need to do is to look at the latest creation to understand that, once again, a winning shot was scored. Beautiful, sexy and overbearing, the GS 80 Custom comes from the hands of a Giovanni Ceccarelli at its highest levels, capable of tracing pure and linear lines that manage to be simultaneously soft and aggressive, sinuous and essential.

Delightful is the wale which, blunt in its first third manages, at the same time, to refine the powerful scimitar bow and to embellish the widening of a maximum beam that, very advanced, reaches six meters and a half determining a real category record.

Perhaps this is why a large crowd of journalists, coming from all over the world, crowds the boat to take part in its inaugural trial. The GS 80 Custom comes easily out from the complicated mooring to which she was bound. It is the owner himself who is maneuvering and, with a few clever strokes to the retractable bow and stern thrusters, we’re out in a flash. This maxi yacht can literally evolve on itself .

As soon as we’re outside we head into the wind, with the third gear of the electric winches located at the base of the mast, the main goes ashore quickly. We bear away, shut down the engine and, even before “unrolling” the self tacking jib, the boat lean on the left side and speeds up at almost six knots while blowing 8 knots of real wind.

The self tacking jib is extracted, trimmed and, immediately, the GS 80 Custom accelerates creating its apparent wind. At 28 ° from the wind we are sailing at 8.3 knots of speed while a crowd of people, far from being disposed where they should to facilitate the situation, suddenly falls silent and looks at the instruments.

I meet Giovanni Ceccarelli’s sight, we smile each other, we don’t need any words to comment on the satisfaction of the moment. Unbelievable how, despite the almost three additional tons of people on board, this maxi yacht can easily slide on the water, at wind speed, only with the mainsail and the self-tacking jib . I close my eyes and imagine the deserted boat, the owner at the helm and his wife lying on the leeward couch.

The large central winch is within reach to discharge the main if the wind increase. In these conditions this yacht tack without touching a button.

This 80 foot is skippered with the ease of a 50′ and has the performance of a racer.

Giovanni takes me close to the must and explains to me that we are sailing in the cruise setting. He shows me the rails for the 105% genoa that is used to switch the GS 80 Custom to the race configuration, and it’s easy to think of how much the performances can increase with this configuration. The true wind drops to 4/5 knots and Paolo Semeraro, great sailor and Project Manager of this maxi yacht, decides to hoist the rolling drifter.

The sail is trimmed and the magic happens again. The boat restarts and accelerates up to 7.2 knots of speed while the instruments mark 5.2 knots of real wind, at 38 ° of AWA.

Paolo leaves me the wheel and moves to trim the sails. The wheel is direct and precise, retransmitting route variations millimetrically.

The boat is reactive, sincere, this GS 80 may be helmed literally with two fingers. The wind drops again, but this yacht does not really want to stop, with three knots of real wind we still make four knots of speed.

Yesterday afternoon there was more wind and the owner, given the conditions, went out to sail. Luck wanted us to be out for the GS 48 Performance test too, so, right when we were reaching the nine knots, in a fantastic close hauled sailing, we saw her arrive from our stern, take us on, easily passing us from leeward.

While the  drone was flying we recorded the scene and, I confess, I felt a thread of envy in seeing this maxi yacht while sailing heeled over, easily reaching double-digit speeds. Then the wind leaves us completely and it is time to return to the mooring.

We enter the harbor and, instantly, life on the quay stops.

Everyone’s eyes turn in our direction while the GS 80 Custom evolves elegantly going to her berth at the central pier.

Because this maxi is not only fast, she is also irrefutably beautiful. Entirely carbon fiber built, the GS 80 Custom by Cantiere del Pardo is furnished with the best rigging and deck equipment available on the market today. All the interiors were built with lightweight material and then covered with the best woods and leathers.

Capable to embark a jet tender of almost four meters in its garage, the stern of this maxi yacht is the presentation of a yacht able to simultaneously express power and elegance.

The design of the main deck it’s simply a masterpiece. Giovanni Ceccarelli succeeded in creating a perspective that, while on the one hand enhances the concept of flush deck, on the other it hosts all the features that a big sailing yacht must have to navigate in complete safety. 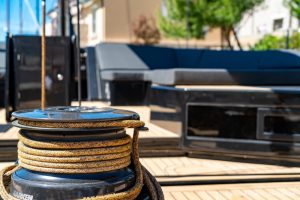 Giovanni has managed not only to chisel a “safe area” where guests can comfortably enjoy sailing, sheltered from sheets and halyards, but he has also created a real dual circulation on board, which makes this area isolated but subjugated by the crew through the hatch which, ingeniously, has positioned aft of the large central table.

Double circulation that, usually reserved for superyachts, in this GS 80 Custom of Cantiere del Pardo, we also find in the lower deck where, again masterfully, is the kitchen to act as a pivot environment. Also accessible from the owner, once closed, it defines the actual crew quarters that, with independent entrances, revolve around a huge chart and work table, and occupy the entire stern. 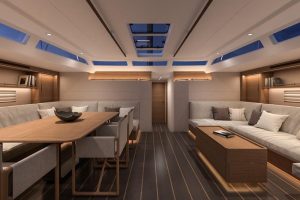 Going down the stairs, ahed from the guest cockpit, you go down into the saloon and, at the same time, you remain speechless. It is a very high level of finishes that characterizes this boat.

Precious essences and a fairytale floor trigger a game of light and dark that pushes the boundaries of this already immense area beyond the physical ones.

A design that simultaneously succeeds in being splendid and that evok the spirit of a real sailboat.

Proof of this are the numerous handrails that, cleverly concealed, are there exactly where they should be while sailing. 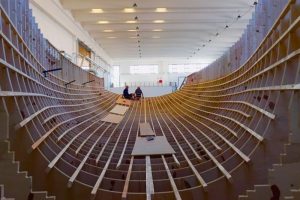 The corridor leading to the bow opens, along its path, to two cabins that bring to 8 the number of guests that this GS 80 Custom can take on a cruise. But it’s only by opening the last door that you can reach the Master Cabin, the undisputed owner’s realm.

Positioned in the bow, it uses an ingenious and innovative design to position a center king-size bed on the left side of the boat.

This trick succeeds in synthesizing the advantages of a central bed and those of a bulkwark bed in a single solution. The result is an enormous bed which, accessible from both sides, leaves room for the cabin and the corridor leading to the en suite bathroom which, on their own, develop in the equivalent space of an entire normal cabin.

Equipped with double sinks and a huge shower enclosure, they are made, as indeed is the rest of this maxi yacht, with care and refinement that are not afraid of comparison.

The new GS 80 Custom di Cantiere del Pardo it’s destined to change market rules. Able to compete on an equal footing with the best and most luxurious international shipyards, this yacht unequivocally succeeds in being both a luxurious cruiser and, at the same time, a formidable racer.

Created to be completely customized, this maxi yacht is the object of desire of all those boat-owners that would like to find a compromise between family and racing and, with this yacht, resolve the problem not only without any sacrifice, but instead maximizing both experiences.

Ice 70 RS: the queen of the Blue Water Cruisers is super fast