The Island of Elba: the anchorages, the most beautiful beaches, the best landing places and useful advice for avoiding surprises

Elba is 27 miles from Corsica, 18 miles from Capraia, only 7.4 miles from Pianosa, the island of Giglio is almost 28 miles away, while Montecristo is 20.5 miles away, and it takes 38.7 miles to sail north to reach Gorgona, the little pearl of the Ligurian Sea. So the main island of the Tuscan archipelago is maybe one of the best yacht destinations in the Mediterranean and it is certainly so to draw up this itinerary-guide, made up of useful tips for sailing around the beautiful Aithàleia. We start sailing along the north coast of the Island of Elba: Capo Sant’Andrea, with a quiet beach which attracts sailors with its beauty. From Sant’Andrea you can start the circumnavigation of the island, but if you spend the night at anchor, be careful where you drop your anchor, because it could run aground in an underwater pipe, so keep your eyes on the chart table for details. Our suggestion in this case is to consult the “Nautical Chart No 40” (from Cap Corse to Alistro and the Island of Elba), published by the Italian Navy Hydrographic Institute. 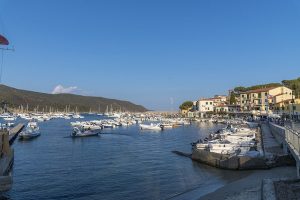 We continue to sail on the Island of Elba from Capo Sant’Andrea down the coast towards a kilometre-long beach enclosed in a green bay of pine trees, located just below the village of Procchio, which also has a dispatcher where you can get supplies. In the evening, you can hear some music coming from the restaurants when the Scirocco, a typical island wind together with mistral, blows. We suggest dropping anchor at Biodola and then at Viticcio, which are separated by their respective gulfs. Biodola interrupts the sea on the white of its beautiful beach, and is watched over by the small windows of Scaglieri and Forno. Here, along the narrow streets, it is worth taking the opportunity to chat with the local sailors: they always have something to say, and it is a good opportunity for a convivial exchange with the people of the sea.

Enfola dream on the island of Elba 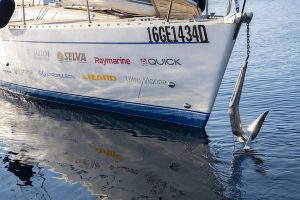 Capo d’Enfola from the south, at one point cutting the water into a thin strip of land. The ideal occasion for a small land excursion. Before setting sail in front of Viticcio beach or to the south of the gulf (which is a good and recommended option), you can set off on an adventure land excursion to the top of Enfola. At the end of the path, you can enjoy the surprising panorama, all over Corsica. The navigation continues towards Portoferraio, not before feasting your eyes on the clear waters of the Sorgente beach. From here there is a really interesting location, and it is a good idea to swim ashore to do some snorkelling in the cave of an imposing rock that provides a nice cone of shade in front of Sansone beach, adjacent to Sorgente beach. If the mistral blows, however, we would advise against staying at anchor overnight in this part of the island, but when the sirocco blows, it is possible to serenely stay at anchor.

Limitless choice of anchorages but there is a Cape to avoid

Further down the coast, it is best to stay away from the beautiful beach of Paudelella because right at Capo Bianco, which surrounds the start of the beach, there is a shoal with dangerous rocks. Portoferraio beckons: the choice of berths, however, also extends to the port of Marciana Marina (GPS 42.809744, 10.196837), which can be accessed at a maximum speed of 3 knots, paying attention to an orange buoy with a radar reflector, positioned 200 metres from the port light to indicate a current meter. Marciana Marina has 115 berths and is protected by a breakwater made of artificial boulders; the VHF channel is number 9. Light 2064 (E 1408) indicates the port by flashing green with a period of four seconds. The prices for this season range from 65 euros per day for boats up to 10 metres long to 210 euros for boats of 20 metres or more.

Rio Marina (15 berths for transiting boats) on the eastern side of the island looks out over the Piombino Channel and is about 16 nautical miles from Marciana Marina. The port has a 100-metre long outer breakwater and a 250-metre long quay; the seabed here ranges from 2.2 to 4 metres. The VHF channel for communications is number 16, while the GPS coordinates are: 42°48′,93 N 10°25′,83 E. The Levante pier, also known as Porticciolo di Cavo, has a draught reduced to a maximum of two metres at the quay (minimum 50 centimetres) and the manoeuvring space is also reduced. A nearby berth can also be found in Porto Azzurro (GPS: Lat. 42 DEG 45′,74 NORTH; Long. 10 DEG 23′,82 EAST). There are 93 berths available at the marina with a maximum length of 60 metres, and mooring assistance can be requested on VHF channel 10. The marina is secure and monitored 24 hours a day, and the mooring depths range from 1.8 to 9 metres. To return to Portoferraio from here it is 15 miles of sailing, while Cavo is just 3.36 miles away.

Marina di Campo offers mooring at the buoy field and is the preferred point for sailing to Corsica, although it is very busy during high season. There is a red light to indicate it, and the depth of the seabed ranges from one metre to a maximum of six. Be careful because the berths are not guarded. Among the services offered are: fuel, slipway, crane, water and electricity. To get an idea, Marina di Campo is 23 miles from Portoferraio and 17.5 from Rio Marina.

Those who like it also have the option of mooring at Cala di Mola, at the buoy field. There is a 36-metre floating pier about 400 metres from the enchanting Porto Azzurro. Mooring is possible for boats from 4 to 16 metres, but the maximum draught is two metres. For information on the buoys the telephone number is: 329-7495839, please note that there are discounts for longer stays. A ferry service is available from 09:00 to 13:00 and from 14:30 to 19:30, and the timetable is ‘continuous’ during the high season. Other services include a parking space, fresh water supply and night lighting.

A valid mooring alternative is the Esaom Cesa shipyards, which can accommodate three hundred boats with a maximum length of forty metres. This latter marina (GPS coordinates +42° 4′ 35.1”, +10° 18′ 55.53′; VHF channel number 09) is one kilometre from Portoferraio and offers many services, including a shop with nautical accessories and spare parts. For larger yachts, a fuel bunkering service is also available at the quay. 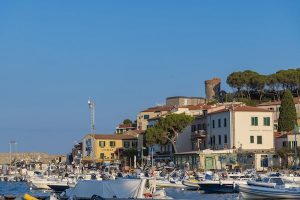 We recommend an onshore excursion to the iron mines of Rio Marina and its mineral museum in the village. On the sea in this picturesque town you will see the Clock Tower, commissioned by James of Aragon, which peeps out rigidly composed in its eight sides visible from the town beach. In the nearby port, with a bit of luck, you can moor on the pontoons (if they are available) but only in high season. Elba is truly perfect, because the anchorages are all close by, it has no less than seventy beaches to discover, and the wind is not lacking to delight sailors. Another advantage is that it is only 40 miles from Piombino. Also not to be missed is the historic Portoferraio, with its Darsena Medicea and its rare northern Mediterranean port, modern and equipped with sixty berths, although always very busy in summer but ultra-safe. In detail, the rates for mooring here in August range from 60 euro per day to 250 euro for 24-metre boats. Services include, among other things: Wi-Fi, quay lighting, drinking water and electricity at all berths, fire extinguishing system with sea inlet, cleaning of the jetties, mooring assistance and boat trim control.

The historic centre of Portoferraio also offers a lively nightlife, but culture is not lacking either. We recommend a visit to the Napoleonic Residence of the Mills, the Archaeological Museum and the Falcone and Stella Fortresses. In addition, the nearby beaches of Capo Bianco to the west of the town are worth a swim, and the northeastern beach of Schiopparello is also worth at least a trip out to sea to see it at sea. Our guides to safe sailing, choosing the most sought-after itineraries, will continue in the next episode to Giannutri, from which the Island of Elba is separated by about 40 miles of sailing.

5 good reasons to have fast sails when cruising. Be1 Sails on test

On Test. Crystal Prop: the antifouling paint for propellers that really works

At anchor in Giannutri, the detailed guide