On Test. Mercury 450R: the new “rockets” by Mercury Marine

We already announced their imminent arrival before summer.

We talked you about them while, excited, we were waiting to test them. Now that the test has been carried out, the word “emotion” strongly emerges from the brackets where it was confined to indelibly remain impressed in our memory.

The Mercury 450R are true rockets

During the Genoa International Boat Show, the day before the test and after arranging the test time, Mercury technicians left us with these words: be careful with your neck tomorrow! Their smile was sly, we would have understood why on the following day.

We get the quay early in the morning.  Two Mercury 450R are waiting for us in their white-and-red livery, installed on the transom of a Nuova Jolly Prince 38. We are immediately impressed by the design of the narrow and tapered caps. Do they really contain 450HP and a turbocharger?

The engines are already running but are totally silent, they are slightly audible on idle. We put our self-inflating jackets on, fasten the emergency lanyard and immediately set sail.

We’re three on board, with a total weight of 240 kg. The boat, instead, has a dry displacement of 3,200 kg and a fuel capacity of 550 liters. The two V8 4.6 l supercharged Mercury 450 R weigh 313 kg each, offering the best weight/power ratio of the market. Their 900 horsepower will therefore have to face a total weight of almost 5 tons.

The sea is not flat. The north wind blows decisively and generates steep insidious waves, but we want to put the engines through the mill. The Mercury Acrive Trim system will have a lot to do.

I put the bow into the waves, push the throttles forward and finally realize what technicians referred to on the previous day. I am pushed back against my seat, so I contract my neck muscles to resist the push. The power is great and immediate, the new engines show us immediately what they are made of.

I immediately abandon the idea of writing down the data on my notebook, writing is simply impossible. I therefore connect to VesselView, the Mercury Marine application which displays all the data coming from the engines on a mobile phone screen. Give the speed and the turst that the outboards deliver, taking screenshots is the only possible way to “secure” our data.

The engine sound is full and aggressive and, when the turbine starts, it becomes a really exciting music. The Active Trim system is very useful; with such performances, manual adjustments would always be late and inaccurate.

I push the gas throttles back to catch my breath.

The two Mercury 450R on test “wear” 21-inch Evolution 4 steel propellers. Speaking with the Mercury driver who accompanies us in this test, I find that the same boat but with 23-inch propellers have already exceeded 67 knots … Maybe a record for a standard 38-foot inflatable boat.

At this point, I want to test the engine response by performing continuous accelerations and decelerations. Even at low engine speed, the volumetric compressor always seems to be running, the thrust is vigorous and immediate. When all the torque comes into play, the engines’ reaction is prompt, it goes from “zero to one hundred” in an instant.

I perform increasingly tighter and faster turns, the rotation angle of the engines is 29.5 degrees, the Active Trim works unceasingly on both engines and I don’t have to worry about cavitation. The system ensures an excellent power management, even in the event of pilot error. I tighten the radius up to 15 meters … We are still running at 20 knots, with both propellers well planted in the water. I’m  having a lot of fun.

The data we collected clearly show that the best cruising speed is the one that the engines deliver at 3,500 rpm. The speed is above 25 knots and the total consumption for the two engines is 3.1 liters per mile.

It is a definitely excellent result 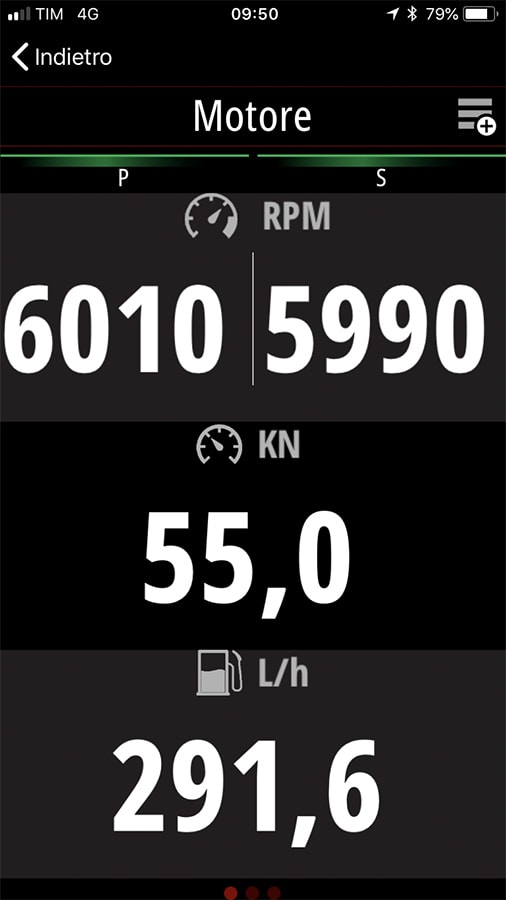 for a 450HP supercharged engine.

Compared with the Verado 300, the most powerful Mercury V8 4.6 L engine we already tested on a boat with the same weight as the Prince 38 CC,  the fuel consumption of the 450R is just half a liter/mile higher. Very low, considering the 150 horsepower gap that divides the two engines.

You can therefore enjoy long transfers without using a lot of fuel.

Moreover, although more powerful, the Mercury 450 R are more fuel-efficient that the only other outboard capable of delivering almost the same power.

However, consumption should not be taken too seriously. It is clear that those who choose this engine don’t focus on savings.

The Mercury 450 R is generally appreciated for its exciting performance and for being the most powerful and most advanced standard sports outboard in the world.

Test Conditions : wind gusts up to 20 knots, low short waves, 3 passengers on board

Differences with the Mercury 400R 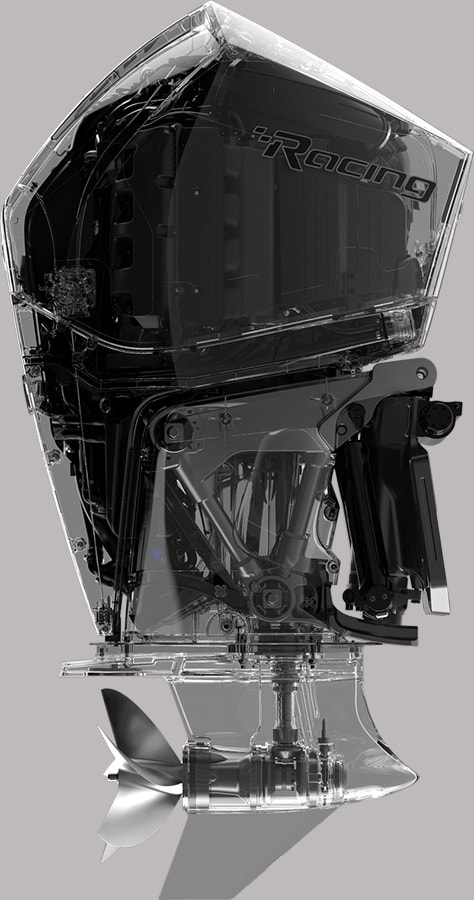 The Mercury 450 R, the most powerful model of the Mercury Marine Racing is based on the new 4.6-liter V8 powerhead, a big difference compared to the 400R which, instead, is a 2.6 L 6-cylinder in-line engine.

The difference in weight between the two engines is only 13 kg in favor of the 400R, very few compared to the corresponding increase in 50 horsepower and 40% more torque in favor of the 450R.

The 450 R is based on the same 4.6-liter V8 powerhead used for the normally aspirated Mercury Racing 300R outboard models.he proprietary 64-degree aluminum block is topped with aluminum cylinder heads with a Mercury Racing Quad Cam Four Valve (QC4) design and double overhead camshafts (DOHC). The valve train features a high-performance intake cam profile and race-spec Inconel exhaust valves. The camshafts are chain-driven and run in an oil bath so there is no timing belt to maintain..

The engine extracts incredible power from a Mercury Racing belt-driven twin-screw supercharger. The supercharger is water-cooled to reduce the temperature of the intake charge and increase power. 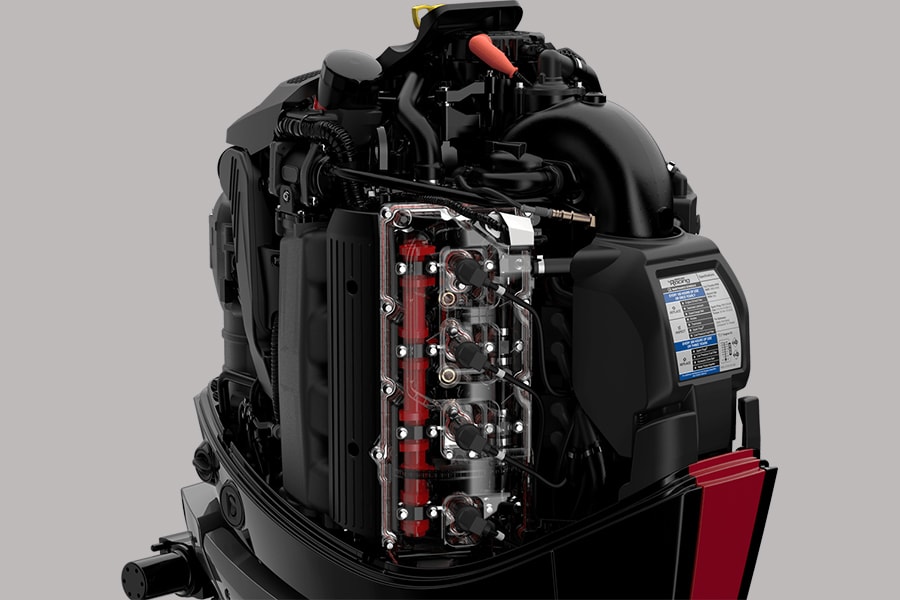 designed for boats capable of speeds in excess of 70+ Knots, features low water pick-ups and a crescent leading-edge for maximized efficiency, and for the 450R application, a stout new one-piece 1.25-inch diameter stainless steel propshaft. he available cambered skeg counteracts prop torque for improved performance and handling in single-engine applications. The 450R is also available with the 5.44 HD gearcase for lower-speed and traditional submerged applications.

All 450R gearcases have a 1.60:1 gear ratio for enhanced acceleration and speed.

On the new 450R models, the popular MAX5 and Outboard CNC Cleaver props are required for use with the surface piercing Sport Master gearcase. For 5.44 HP gearcase applications, Mercury Racing’s Bravo I FS, Bravo I LT, Enertia ECO XP, and Rev 4 XP are excellent options.

The Mercury Racing 450R is available in Cold Fusion white and the legendary Mercury Phantom Black.

Kufner 54 Exclusive: quality on the water