It’s been only a few 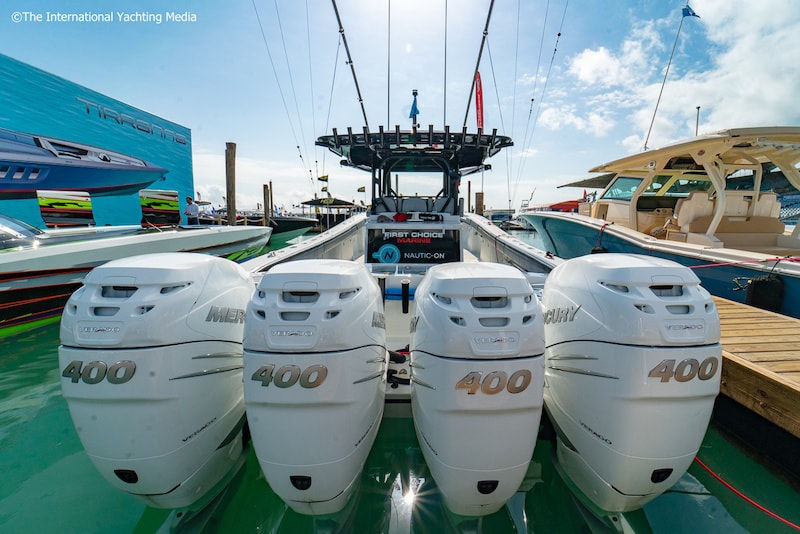 days since the brand-new Mercury Verado 400 were presented and, as usual for Mercury, the outboards are already available for testing.  After all, you only have to walk down the jetties of the Miami Boat Show to realize that; they are present very widely, in their colourful guises, to adorn the sterns of the boat exhibited.

For our sea trial, we have chosen a quad rig that, for the occasion, has been installed in the stern of a Yellowfin 39, a boat specially designed for offshore fishing that, as you can realize at first glance, feels like running.

Our boat is pretty heavy, with a dry weight of 13,000 pounds that, at the current exchange, correspond to little less than six tons and that, with a complete tank of fuel, systems and 7 passengers on board become about 9 tons. However, a glance to the stern suffices to not be worried since the four Verado 400, in their historic aggressive standard grill, already seem eager to be put through the mill. 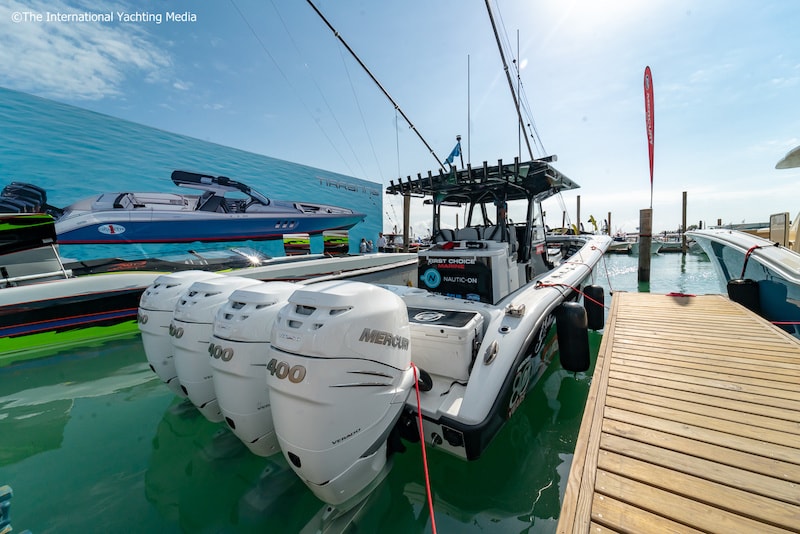 We start engines and, with our surprise, we’re welcomed by a silent mumble; with the engine idling, noise is really low. We re-tract moorings and, with the help of the Mercury Joystick Piloting system, we leave the narrow (and crowded) maze of jetties hosting the boat show. I activate the Active Trim and we’re finally ready for our test.

We head for the area where planing is allowed. At low speed, the quad rig is certainly not moderate but, if we were trolling, we would probably use just two engines, consuming just half the amount of fuel.

Then, we start to accelerate and I immediately recognize the sound of Verado. Full, aggressive, it’s like music to my ears. The Yellowfin lows her stern while, at 500 rpm, we progressively push throttles down to collect our data. 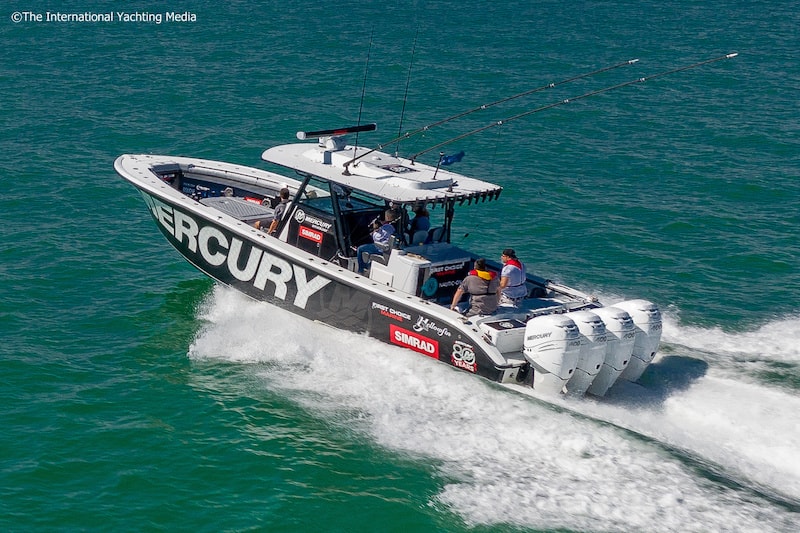 little more than 3,000 rpm, we are running at a speed of 20 knots; a look at the instruments and… and I have to double-check because we are using just 20 liters per hour and per engine, which, with all the weight we are carrying, is very little. Mercury’s engineers must have worked a lot; consumption is really low.

We go on accelerating and, between 3,000 and 3,500 rpm, with the compressor under pressure, a dose of power and torque comes in a clearly perceptible way. It’s like a shot of adrenaline that incites to push throttles ahead and you can’t resist.

We speed up progressively and, while a smile comes over our faces, the displays shows 6,050 rpm while GPS indicates little less than 70 miles/hour that, to put it in European terms, means that we are flying on the water at 60 knots!

Now, it’s time for us to carry out our acceleration tests. We push gas throttles all down and we are literally thrown against seats. The four Verado push frantically and, as the boat planes, they deliver the top speed again in a blink of an eye.

It is really hard not to fall in love with this way of sailing, this Verado 400 quad rig is really addictive.

We stop, I prepare my drone for my shooting, I make it take off and, fortunately, a thought comes to me and, just a second before I give the green light to the captain, I invite him not to go fast.

Otherwise, I would not have been able to keep up with him.

The new Mercury Verado 400 outboards are simply amazing. Mercury has managed to create an outboard that, while preserving all the sport qualities that make us love the Verado series, is definitively fuel-efficient and silent at low revs.

If you look at the table below, you can notice that fuel consumption (l/nm) per each engine is very low.

Used in a classic double rig, the new Verado 400 would therefore express an almost linear consumption curve that would allow us to sail, even at high speed, using just 2-3 liters per mile. A really excellent performance, especially if compared with the amount of adrenaline it engenders.

Moreover, with a weight of just 303 Kg, the Verado 400 is the lightest motor of its category. If we compared it with the only other motor of the market that is able to deliver such power, we would see that the Verado weights 130/140 kg less and, as we all know, low weight in the stern is undoubtedly important.

Mercury Verado 400 : all the numbers of the test