Nuvolari Lenard and the new MCY 70 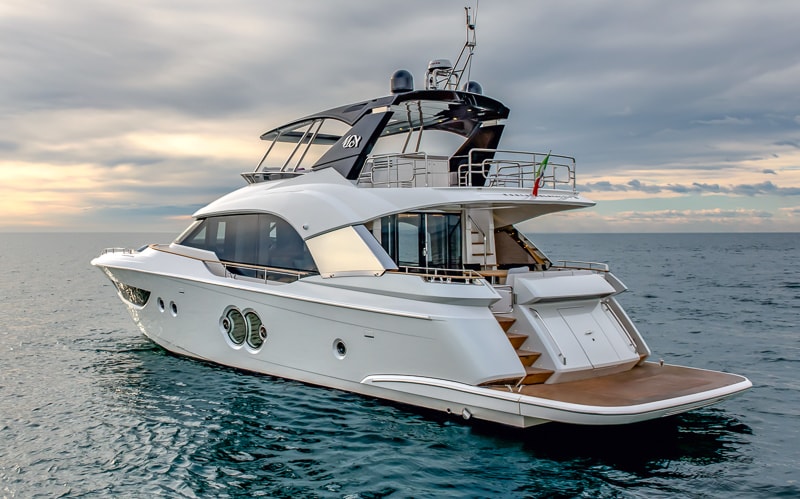 is probably one among the best “design ateliers” in the world. Capable of creations of rare beauty, this studio has the great ability to know how to innovate without upsetting the classic standards of beauty.

That’s maybe why I was looking forward to seeing the new MCY 70 that, double responsibility, has also the task of initiating a new generation of boats, of which she is the central model. Called Vision, the new series will give birth to two other yachts during 2019: the MCY 66 and the MCY 76.

Animated by these thoughts, I walk down the halls of the world’s largest out-of-water boat show, I reach the new creature and… and there’s no thinking because the curb appeal takes over.

The new 21-meter yacht by Montecarlo Yachts is simply wonderful. 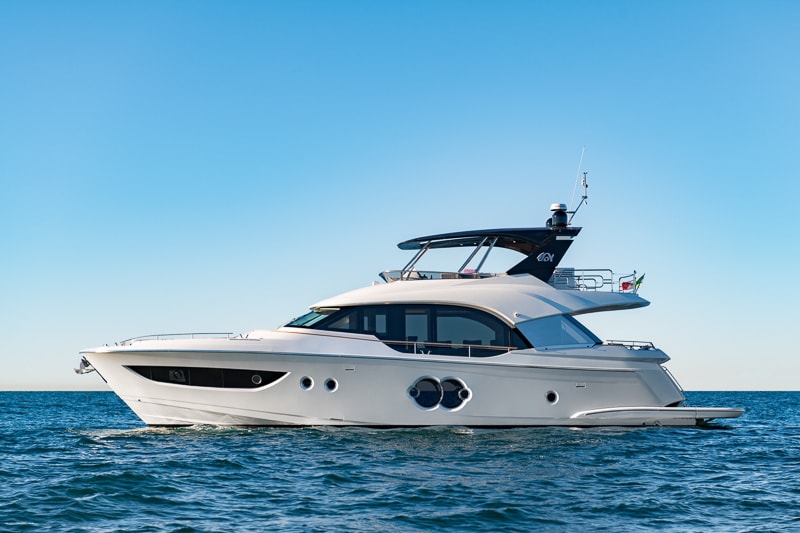 The design studio Nuvolari-Lenard has succeeded in designing a boat that, while preserving the typical family feeling of the shipyard, is definitively new and different from all the others. More lightweight, brighter and even more elegant, the new entry is bursting with class.

Topsides imperceptibly get off the ground, from the stern to the bow, and host large windows with portholes that result into a lighter deadwork design. The glazed surfaces on the main deck, expertly animated by slinky curves, run along the sides of the yacht, diverge and offer heights that, whilst they cleverly streamline the lateral view, let precious natural light come inside the boat.

It is sufficient to get 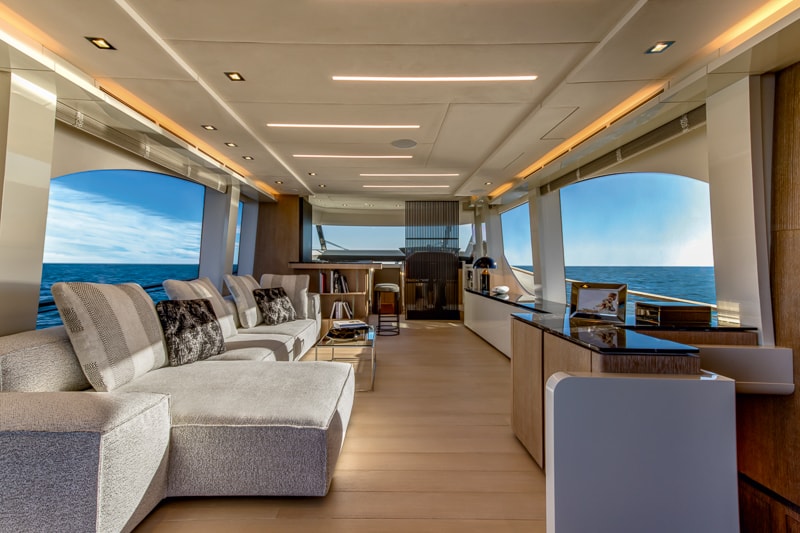 the entrance of the main deck to realize that; the feeling is like being in a large seaside elegantly furnished penthouse.

Nuances and strong contrasts play in this space that, suspended between a floor made of natural wood and a wonderful ceiling, gives an unparalleled sensation of space and freedom.

On the lower deck, two separate accesses lead to the master suite and three cabins respectively; of course, I don’t resist and immediately get the Master cabin. 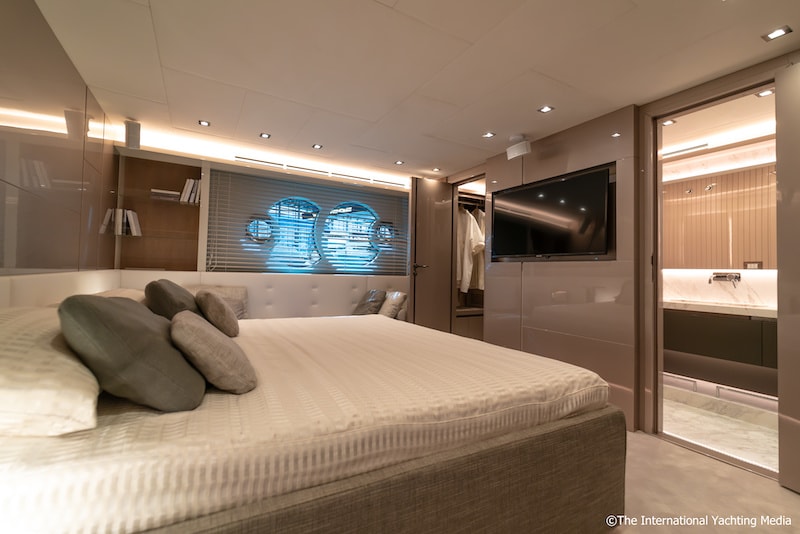 I like very much the idea of having a night area completely reserved for the owner and positioned in the stern. The result is a large suite with direct access to the interior lounge, the cockpit salon and the beach area.

A carefully designed circulation that, within a few meters, contains 70% of the life on board while guaranteeing precious privacy to owner.

The master cabin is huge and uses all the 5.5 meters of the beam available to offer a luxury refined environment whose borders are virtually extended by two large windows that, in the shape of adjacent portholes, represent the distinctive hallmark of Montecarlo Yachts. 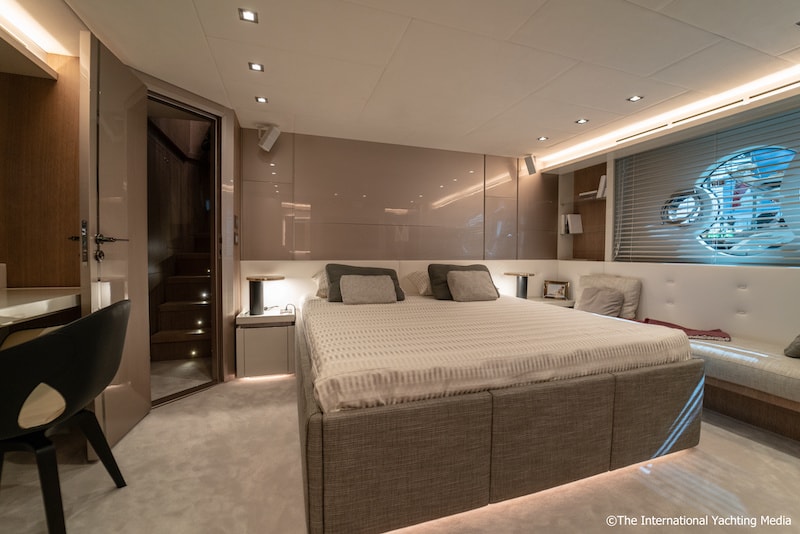 is nestled in the middle of the cabin and framed by a linear sofa on the port side and a long desk on the starboard side.

At the foot of the bed, on the left, I find a walk-in closet while, on the starboard side, the en-suite bathroom offers unthinkable dimensions and a wonderful separate shower box.

Between the two entrances, a tv screen of at least 50 inches is barely visible, overlooked by the enormous dimensions of the suite. 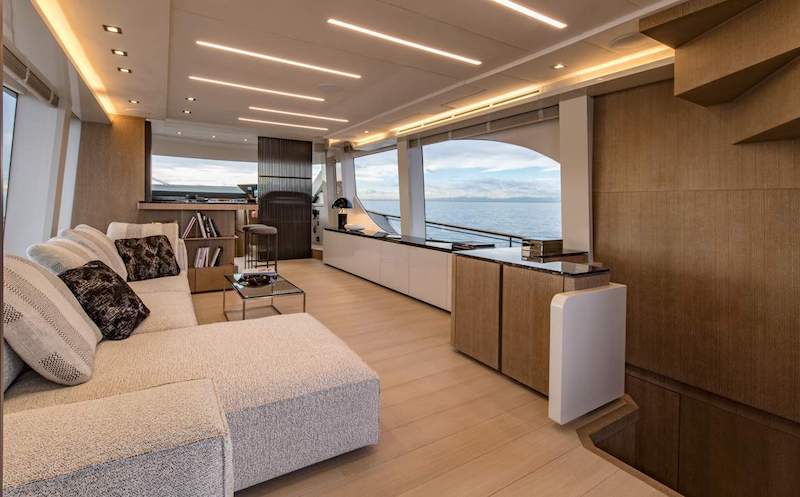 I climb back, I walk the main deck of the MCY 70, I stop and look at the forward arrangement. I walk back in order to elaborate what I have just seen, I turn and, again, I look at the bow.

It’s amazing! With only few genial lines, Nuvolari Lenard has created a unique work with  two different environments within the same space.

Indeed, if we observe the salon, from the stern to the bow, what we can see is a huge living room suspended over the sea that finds its uninterrupted horizon at the height the studio has chosen as the height limit for the bridge and furniture. 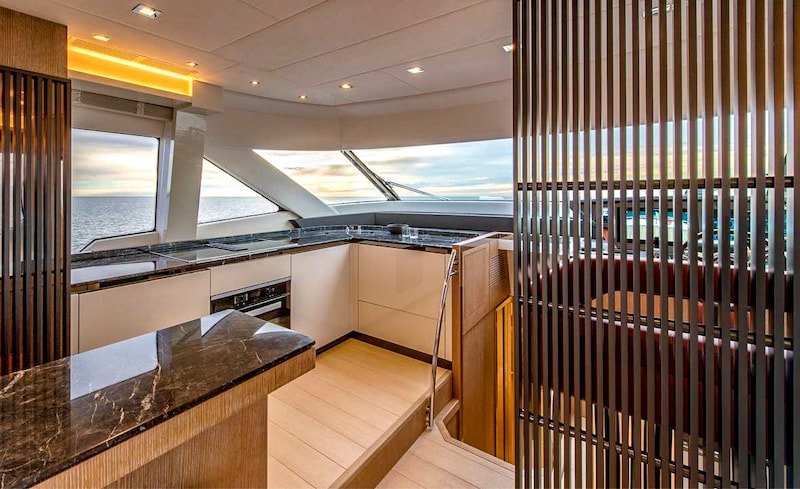 symmetric yet differently hidden, produce a virtuous optical effect that unveils, only at the last minute, a L-shaped galley of rare beauty and the bridge.

The whole develops almost without noticing that, a little like if this corner has just materialized before our eyes, like a magic, the magic of an illuminated designer that, as you can read below, still has some new surprises for us. 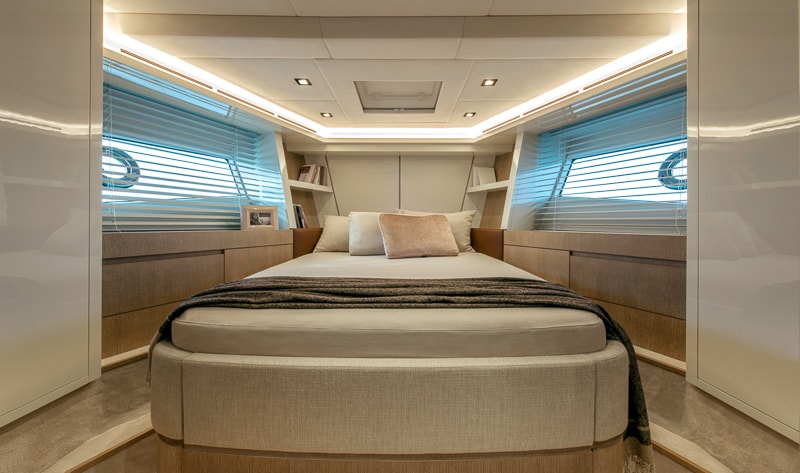 As I get the guest area, I find myself in a hallway from which three cabins – two double and a VIP one – take shape. In particular, the latter is not too far from being an additional master cabin in terms of size, attention to details and arrangement.

Equipped with an extraordinarily large en-suite bathroom, it is flooded with a great amount of natural light by two long forward windows that contribute to illuminate the “tone-on-tone” game that makes the overall view of this environment very elegant.

The two double cabins are spacious, well-refined and positioned on both sides of the entrance ladder. Fitted with single beds, they offer a central walkway and dedicated wardrobes. 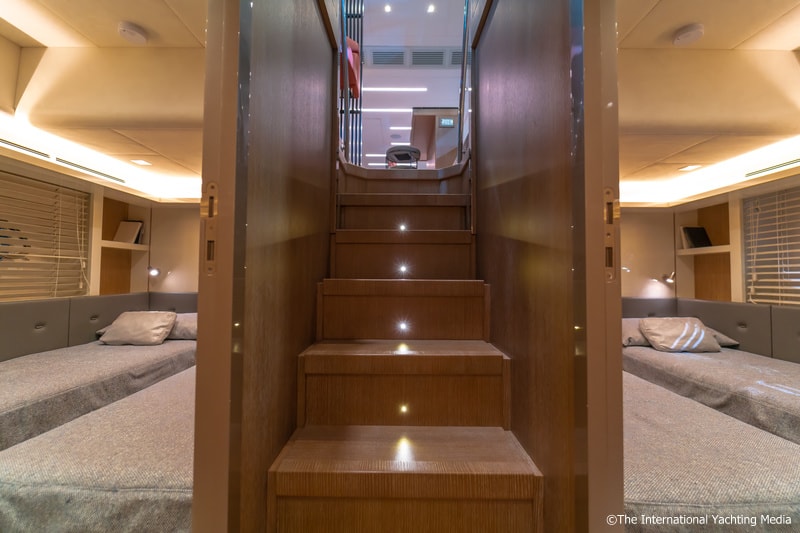 with separate shower is at the service of both cabins and create an additional separate environment that, isolated from the forward VIP cabin, provides the latter with additional privacy.

Before climbing back, I can’t help but notice how, even in this area, nothing is left to chance.

The game of symmetries, the courtesy lights of the staircase, the clever use of lighting (both direct and reflected) don’t stop highlighting the positioning of this MCY 70.

Now, it’s time to discover exterior spaces because it’s exactly here that we are about to discover a new breath-taking optical effect. 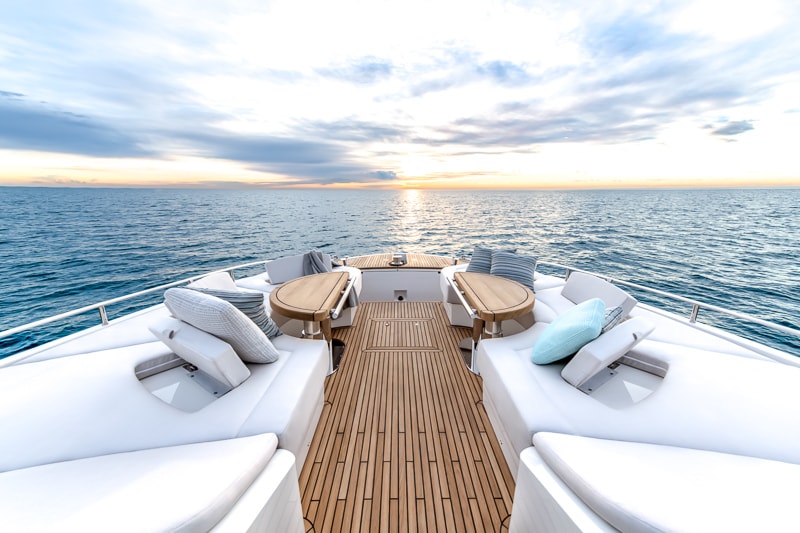 The bow is accessible from two side-decks that, as typical of Montecarlo Yachts, converge on the perimeter of the windscreen and raise, making us discover that, more than a mere Portuguese bridge, is a real terrace on the sea.

Here, the optical effect that the design studio Nuvolari Lenard gives us is substantially similar to that offered by the flush pools you can find in the world’s most beautiful sky-lounges.

Suspended over the sea and apparently without barriers, this terrace inverts the paradigm and offers the boundless sea to the vie of the guests who, immersed in the luxury offered by the contrast between white and teak, enjoy a unique, unparalleled view.

The upper bridge is designed to offer a substantially independent environment.

Covered by a precious 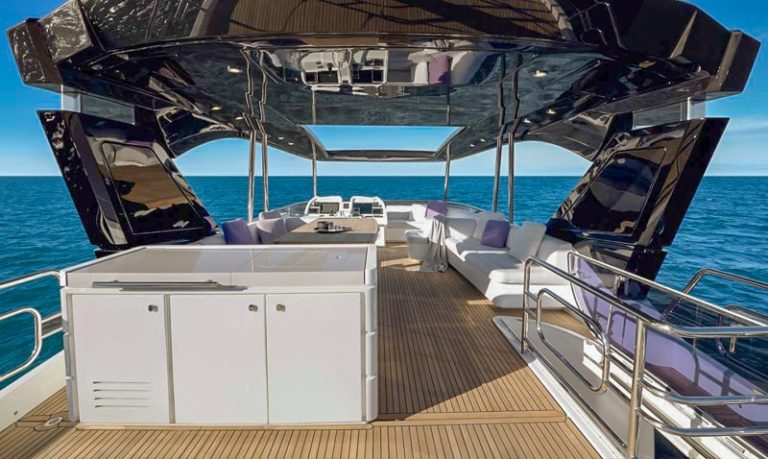 carbon T-Top, it provides the yacht with an additional, huge open-air lounge with a 360-degree view that, when necessary, can be further expanded by an electrically-operated sliding sunroof.

In addition to accommodating the second pilot house, this bridge also offers a luxury lounge that, enriched by the efficient lighting systems which the MCY 70 is equipped of, will be one of the most most appreciated spaces for summer cocktails.

The Montecarlo Yachts MCY 70 is not only the first model of a new range but a yacht that is able to innovate and stand out within a market where flybridge models, unfortunately, risk to be too similar to each other.

The design expressed by Nuvolari Lenard with this yacht shows a refined smart way to evolve classic that can therefore become modern while preserving all the features that make a boat a refined, warn, slinky and, above all, elegant object.

The main deck and the forward terrace are a real masterpiece of design and show, in a way that is as cheeky as unequivocal, what is the tangible difference between the term “architecture” and the word ” interior design”.

Terms that, unfortunately, are often misunderstood in the nautical sector and lead to the realization of projects that, although beautiful if you want, are however light-years away from what we’ve just seen.