Neo 430 Roma is the name of the race cruiser project optimized for IRC, designed by Paolo Semeraro, owner of the “young” Bari-based boatyard Neo, whose reputation in the sailing world is well known. Hull no. 3 of the Neo 430 Roma is currently being tested in the waters of the lower Adriatic in Puglia, “because before we deliver our boats we always test them at sea here in Bari,” explains Paolo Semeraro. The boat is called “Rhumb Runner” and will be delivered within the month in the States to the owner, who commissioned it by requesting special features: “useful for landing in shallow waters without sacrificing offshore performance“. 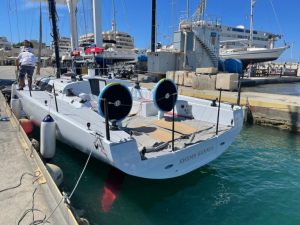 This third Neo 430 Roma “is designed to meet the requirements of those who have a mooring “on the doorstep” – explains Mr. Semeraro – and has the special feature of having a retractable keel, a lifting keel, as we call it in nautical jargon”. “Among other qualities,” adds Paolo Semeraro, “such as the full carbon construction, the lifting keel is a feature that sets us apart. It is a relatively small-sized model. The lifting keel is an optional extra on very large boats, but few boatyards use it on small boats because it is very complex to create such an advanced system in a small space”. The first hull of the Neo 430 Roma in circulation went to an Italian, the second to an Australian stationed in Sydney, but there are another four boats sold: the fourth is destined for Hong Kong, the fifth for Germany, the sixth for France next year and the last will go back to the United States in 2022. And there is an open negotiation for the eighth one.

We have already tested the Neo 430 Roma (click here to read about it). The versatility of the boat is evident in the fact that it can be used in a wide variety of contexts, which is perhaps the main reason for its success. “People are really enjoying the product because it’s a good compromise between high-performance cruising and the possibility of racing without changing the boat concept. You don’t have to dismantle half the boat if you want to go racing because the boat is already built very light, so it’s easy to switch from performance cruising to racing”. 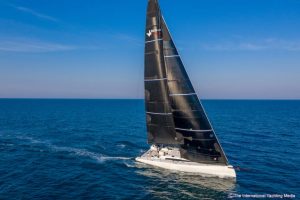 Incredibly, despite the state of emergency, the Neo boatyard has managed to maintain constant operations, except for a few delays due to external companies: “I sold all the boats during the pandemic, four during the first phase, three during the second one. The problem is not selling the boats but building them in the right timeframe, considering the difficulties in finding raw materials and labour at this time.” Paolo Semeraro also does not hesitate to discuss the problems that Brexit itself is causing the boating industry, and talks about some of the difficulties the sector is facing as a result of the British divorce from Europe

Where does the name “Neo” come from? “The inspiration for the name of the boatyard comes from the film Matrix, where the main character is actually called “Neo”, played by Keanu Reeves, who is the divine dominus figure of the film. Neo also stands for “new” and is in some way global, because it expresses the same meaning, from Greek to Latin, in other languages as well“. 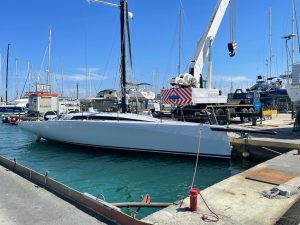 of the boatyard include many ambitions: “For now, we hope to launch our flagship, the Neo 570 C, in early September. It’s a 18-meter boat made entirely of pre-impregnated carbon and is almost 110 per cent true to the shipyard’s concept of super-fast, super-sporty cruising and high-performance racing. The boat has taken all these concepts to extremes. The construction is based on the B52 model, combined with cruising equipment but all made from super-light or nautical materials to keep the weight down. An 18-metre boat weighing 11,000 kilos with 6,000 in the keel. In short, it’s “unthinkable”, it weighs a third of the weight of a standard boat”.

And there’s a lot of satisfaction: “We are very happy with the sales that are developing and how this niche product is being appreciated. We couldn’t have thought of anything better when we started out, considering the pandemic. It was a passion, I made the first boat for me the way I wanted it. When I launched the first one in 2014, a cruising boat made like this represented the avant-garde, and today that standard is involving new owners who understand and appreciate it”. With these words, Paolo Semeraro says us goodbye as we admire the city beach near Bari. 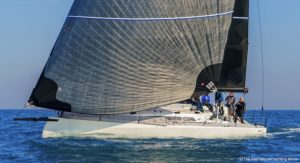 Mussini Giorgio Srl: Corvetta 24 and Paraggina 10 at the boat shows

Marina di Portisco, the gateway to the Emerald Coast

New Ranieri Next 330 unveiled, here are the first exclusive renderings