Following the success of its first model, the NY24, Nerea Yacht presented the new NY40 at the Venice Boat Show 2022 press conference. The boatyard’s “modus operandi” remains unchanged and, as we have already seen, the new boat stands out for its versatility and possible customization options which, on a 12-metre long model, will be even more numerous and permissive. 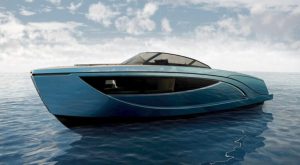 tangible expression of our art,” says Dario Messina, founder of Nerea Yacht, at the end of the presentation video that left us literally speechless.

If the 24-footer was born almost as a joke, this time Nerea is serious about proposing a 40-footer that echoes the taut, clean-cut lines of her smaller sister. The NY40 will be offered in several versions, with or without a T-Top and with inboard or outboard propulsion, thus satisfying both the European market, which prefers the first type of engine, and the American market, which prefers the second.

All configurations exude sportiness and elegance, with a sterndrive version, more elegant, and an outboard version, sportier. The bow is inspired by the automotive sector and is reminiscent of the bonnet of a sports car, while at the stern there is a large electrical opening sundeck with integrated gates, from which there is also access to the engine room and ample storage. There is plenty of space to stow everything needed for a multi-day cruise and the various water toys.

An innovation that we appreciated is the particular aft platform called COSMO, formed by a large fixed portion and three steps that can be raised and lowered and which recalls, as Dario reminds us, the four elements: air, water, earth and fire. In fact, this name is derived from the four functions that the platform performs by raising or lowering the steps, namely that of tender lift, gangway, swim ladder and, of course, that of bathing platform. 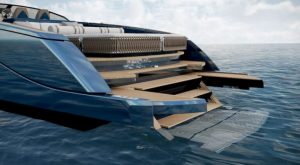 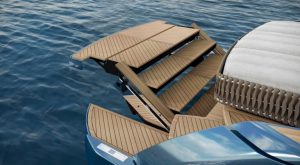 The helm station houses comfortable and ergonomic custom seating, designed by Davide Bernardini and Alessio Battistini of IDEAEITALIA, already seen on the yard’s previous model. The ergonomics, however, are not limited to the seats alone, but the whole boat has been designed with this concept in mind and all the passages are comfortable, so that you can reach any point on the boat without the risk of falling overboard.

“The yacht is less and less an instrument of representation and more and more something the client wants for himself, it has become a new place to live, an extension of one’s own home, but without forgetting the pleasure of going to sea, and even going fast when necessary,” says Alessio Battistini, architect at IDEAEITALIA, speaking of the new NY40. 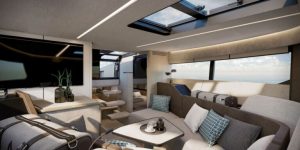 The interiors of the Nerea Yacht NY40, thanks to the large side windows and skylights, are abundantly flooded with natural light. The renderings show a contemporary décor and a prevalence of pastel and soft colours, with matt finishes and glossy details in strong colours. The basic configuration envisages a double cabin in the bow or a C-shaped sofa, while in the stern one can opt for a double bed or two single beds which, however, can still be linked together.

“ We have included – adds Davide Bernardini, designer of IDEAEITALIA – an accessory that was born together with the boat and is part of the soul of this interior: a full custom travel bag, one for each guest, which can be stowed exposed on the bulwarks, to give even more personality and taste to the Nerea experience on board and create an intimate relationship between the boat and those who are lucky enough to own it“.

Much space during the conference was given to the work the yard has done to minimize environmental impacts, using, for the first time in the sector, eco-mortar and oil-based mortar. The glues used are water-based, the outer cushions are made of recycled materials, as is the sundeck fabric, made of polypropylene, a material derived from recycled plastic. In addition, the customer can choose to use esteak, instead of the classic teak.

” NY40 is a project that gives ample space to the creativity and ideas that I share with the designers of IDEAEITALIA,” comments Dario Messina. “It is the result of a journey that we started together with the intention of expressing to the full the inventive and somewhat artistic vein that characterizes and unites us”.

Pardo GT52, the debut of a versatile, futuristic yacht