Scanner Marine is getting ready in grand style for the autumn yachting season.

The Italian shipyard, specialized in the manufacture of tenders and Maxi Ribs, will join the Genoa International Boat Show, from October 1-6 but has been recently obliged to renounce the Cannes Yachting Festival, where it would have exhibited the Envy 1400HT, already unveiled last year, now powered by three Mercury Racing 450 R outboards (in the picture above, power comes from three Yamaha 425 V8 XTO Offshore engines).

The Envy 1400 HT is a high-performance day-cruiser equipped with two cabins, a dinette and a separate bathroom below deck. As a result, with a little spirit of adaptation, cruising is not at all precluded, even if, of course, daytime use is always what this boat is designed for. 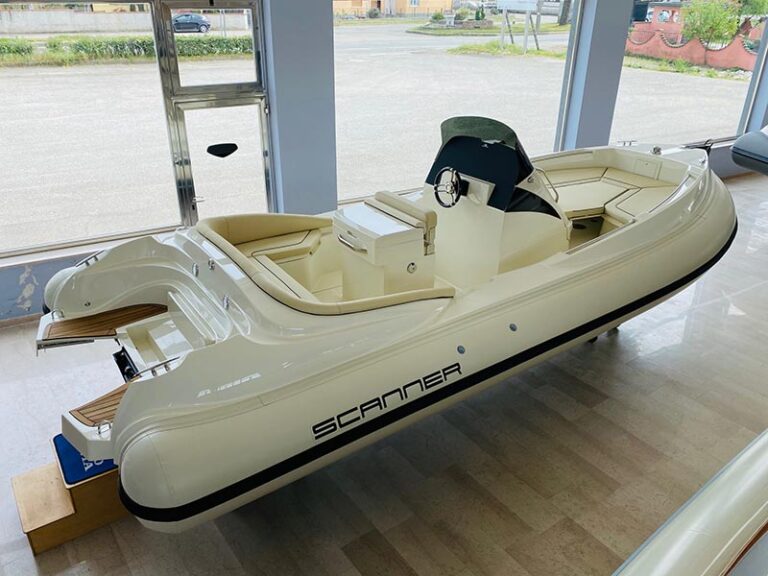 The boat is also distinguished by a large and comfortable helm station with a 360-degree view on the sea. Passengers can also enjoy two sundecks, in the bow and stern respectively, both with generous volumes.

In parallel with the Envy 1400 HT, the visitors of the French boat show will also have the possibility to discover the Envy 770 Outboard, a performing yet comfortable sundeck yacht which is part of the Tender Line collection.

The deck layout reflects the style with which Montemitro Design has characterized the entire production of the shipyard. The tubes are topped with fiberglass molding which helps to give the boat a distinct personality.

A U-shaped sofa leads to the cockpit, where the seat (with seated/stand-up configuration) also incorporates a grill. However, the main innovation is in the middle of the boat, where the console offers a small cabin with toilet. The Envy 1400 HT and the Envy 770 Outboard will be exhibited at booth PAN 055, Vieux Port.

At the 60th Genoa International Boat Show, instead, Scanner Marine will present not only the above-mentioned models but also a world premiere of the brand-new Envy 710, a very successful model whose penultimate restyling dates back to 2017.

The layout includes a central console with single seat, a U-shaped sofa in the stern and two large side-decks that lead to the bow sundeck.

The Envy 710 will debut in the waters of the Ligurian city in an eco-friendly mode thanks to DeepSpeed, the innovative electric engine that minimizes the disturbance caused to the marine environment through an important reduction of polluting and sound emissions, while maintaining the performance of classic engines.

The Envy 710 will be therefore equipped with the revolutionary DeepSpeed for a truly eco-friendly première.

Since 1989, Scanner Marine has made innovation its workhorse. The watershed year of the company was 2001, when Scanner Marine, founded by Donato Montemitro and led by his son Fabio, established itself on the international market thanks to the production of increasingly cutting-edge models and the commitment of its dealers who, with the their professionalism and passion, have contributed to making the Italian brand famous all over the world. The Scanner brand stands out for its unmistakable design and the excellent hull performance of its 100% customizable boats.