Sunreef Yachts will be exhibiting the 80 Sunreef Power Great White catamaran at the Monaco Yacht Show from September 22-25. The famous tennis player Rafael Nadal is the owner of this ultra-luxurious multihull which, we can bet, will also surprise the public at the Monaco Yacht Show. As for Nadal, who bought 80 Sunreef Power Great White in 2013, he says: “The boat is like a home for me, where I spend a lot of time enjoying myself and, at the same time, it gives me the opportunity to disconnect from everything else.”

And Sunreef Yachts responds in kind, describing each of its boats as a “custom-made creation“. Each catamaran, motor yacht or superyacht has been designed and manufactured directly in Gdansk, Poland, since it was founded in 2003. 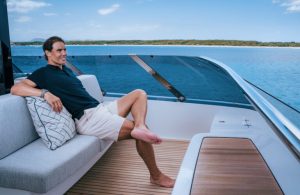 luxury yachting came with the launch of the Sunreef 74 CHE, a prestigious 74-foot catamaran with flybridge. This “ocean-going” vessel profoundly changed the design philosophy of motorized multihulls, which up to that time were mainly chartered and were not very well maintained by luxury yachting standards. Thus began a success story for Sunreef Yachts.

The Monaco Yacht Show is the perfect opportunity for the Polish shipyard to further assert its position, especially in the segment of motor and sailing catamarans. By the way, the Monaco Yacht Show, which is highly focused on superyachts, will be held in Port Ercules, where boats from the world’s best shipyards will be moored. 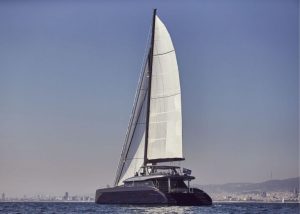 Rafael Nadal’s catamaran will be moored in front of the QC 11 stand on the “Chicane” quay. This dream catamaran accommodates up to eight people in a four-cabin layout. The two very wide hulls accommodate the main deck, which features a spectacular cockpit furnished with two face-to-face sofas and full vertical windows at the bow, starboard and port sides of the boat. At the stern, the terrace overlooking the sea is “crazy” in size. The flybridge with bar, barbecue and living space is the highest place on the boat to relax with a panoramic view (and is also Nadal’s favourite).