Transfluid has been operating in the power transmission sector since 1957. Thanks to the technology and high quality of its products, it has established itself as a reference point in this market sector in recent decades. The ongoing research and development work has enabled the company to introduce its own hybrid system on the industrial and marine market.

Thanks to the production of permanent magnet synchronous electric motors, Transfluid is now able to offer a complex hybrid propulsion system made up entirely of Transfluid-branded components, including the wiring that connects them in a proprietary network managed by its own software and control unit.

The Transfluid hybrid system is proof that industry is ready, offering both hybrid and electric propulsion solutions with a wide range of engines to suit any type of application.

The system can be installed on both new, retro-fitted and on-the-water boats. The module is installed between the internal combustion engine and the transmission, with the electric machines manufactured by Transfluid, mounted parallel to the propulsion axis line, in a very limited space and respecting the SAE coupling standards used by engine and transmission manufacturers. Transfluid has already successfully installed its systems on various types of both pleasure and work boats in several European countries.

The components of the hybrid system, designed and built by Transfluid, are used in a variety of naval applications; not surprisingly, all the components are built in series, with an interesting scale economy logic.

Hybrid modules, batteries and electric engines have all obtained the DNV-GL Type Approval.

The Transfluid hybrid system makes it possible to optimize the efficiency of propulsion modules installed on board, the combustion engine and the electric machine, allowing each mode to be used at its most efficient point, so that consumption can be optimised for each operating profile. 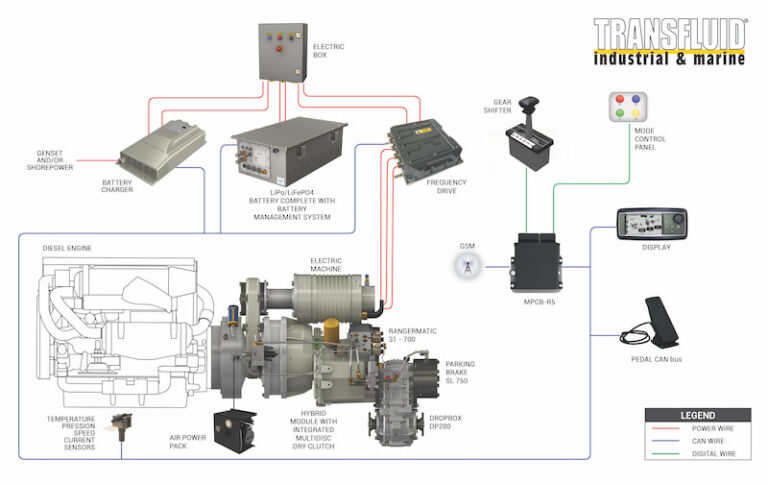 The Transfluid systems makes it possible to reconcile eco-friendly navigation, obtained in electric mode, with long-range navigation, always in total safety, using the internal combustion engine, during which it is of course possible to use the electric machine to recharge the batteries in “regeneration” mode.

The electric motor is powered by a high-efficiency lithium battery bank ( LiFePO4), capable of powering the whole system in zero-emission and completely silent mode. Furthermore, it is possible to increase the range with the support of an on-board generator, with a lower power rating than the main diesel engine, which acts as a range extender which can supply energy to the propulsion batteries even when sailing electrically.

The Transfluid hybrid system is flexible enough to meet the needs of most boatyards in the recreational and work boating industry. The shipyards will be able to allow their customers to plan eco-friendly, silent and cost-saving navigation, features that can also be extended to workboat operations such as loading and unloading, passenger transport, etc.

Synchronising the two possible navigation modes also saves fuel in the logic of the overall journey; moreover, it offers the pleasure of cruising in total silence, entering protected areas, staying at anchor without the engines running, sailing along pristine coastal areas without polluting, entering ports and channels and manoeuvring in silence without “polluting”.

Transfluis manufactures PMSM Permanent Magnet Synchronous Machines with natural or forced convection air cooling and liquid cooling. These solutions ensure high efficiency and simplicity with limited weight and dimensions. The PMSM electric machine is controlled by an Inverter (Frequency Drive) which allows the electric machine to work both as a motor and as a generator. The perfect integration of the range of electric machines with the Inverters allows a compact installation of the system, as well as making management simple and effective at any stage of operation.

Electric motors have found a wide application in both work and recreational boats, guaranteeing safe, purely electric navigation. An eco-friendly solution for both new and on-the-water boats. It eliminates noise and its use helps reduce water and air pollution, allowing access wherever quiet, environmentally friendly navigation is required. Ideal for Marine Protected Areas, urban areas and inland waters that are particularly sensitive and increasingly restricted. Most of the boats in the Dutch canals use systems under the Bellmarine brand, owned by Transfluid, a brand that has been a leader in eletric propulsion in the Netherlands for several years and is also well-established on the European market, where Transfluid electric motors are used.

Thanks to an extensive international after-sales network, Transfluid ensures the efficiency of its products through targeted checks and on-site interventions by highly skilled personnel. Transfluid is present in the world with a network of 5 branches, in addition to the headquarters in Italy, and around 45 distributors.