News/Stories on the dock

Elba Island, a passionate prose recounts the sinking of the steamer Andrea Sgarallino, attended by Galeazzo Ciano, who was shortly to be shot by Mussolini

At the port of Piombino, the 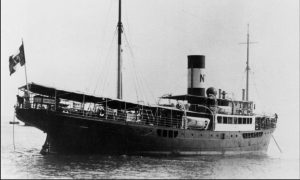 steamer Andrea Sgarallino blows its first siren in the dark sky. It is eight o’clock on 22nd September 1943. On the quayside, amidst suitcases and rucksacks, around two hundred soldiers and one hundred civilians are waiting to get on board the ship and return home: the island of Elba.

A child asks: “Why are we getting on a military ship?”

“It’s a ferry, not a military ship,” explains the mother, opening her umbrella.

“And why is the Nazi flag flying?” he insists, “And is she wearing a green dress?”

“No green dress… it’s military livery. Don’t worry, they just forgot to repaint the steamer and remove that dirty flag.”

“But what are you telling your poor child?” an older man intruded sternly, “tell him the truth, tell him that the ship has to pretend to be German… so the Germans don’t attack us. Do I make myself clear?” and he angrily kicks his cap.

The mother takes the little boy by the hand, is about to answer but the siren warns a second time: eight and fifteen minutes. She turns her back on the man and climbs up the ladder.

He wants to recover one of his famous diaries hidden on Elba in the home of family friends. He will not be able to embark. Someone informs him that Mussolini is about to have him arrested, the charge is high treason: at the Great Council of Fascism Ciano has dared to vote against the Duce. He manages to evade arrest and escape to Munich.

At half past eight, the Andrea Sgarallino blows its last siren and closes its hatches. The navigation begins. It will be the last one. Captain Carmelo Ghersi argues with the first officer: it would be more prudent to dock in Corsica, already occupied by the Allies. No change of course! They will dock in Porto Ferraio, on the island of Elba.

It is half past nine, the steamer passes Nisportino, in the north-eastern part of the island of Elba, and sights Forte Stella. A few minutes and she will drop anchor. The Hms Uproar submarine of the British Navy came across it.

Captain Laurence Edward Herrik has no doubt: Nazi flag and military livery. The order is immediate. A torpedo hits the steamer, rips it in two and thick smoke rises into the sky. The island’s inhabitants watch in dismay. The desperate cries of the passengers reach them, but they cannot intervene, as the submarine is still on the coast.

The flames are extinguished and the ship sinks. Only four survivors. For all the others, below deck because of the rain, there is no escape.

In the following days, the bodies of dozens of passengers resurface. Ciano Galeazzo escapes death but not conviction: he is shot a few months later at the Porta Catene firing range in Verona, on Mussolini’s orders. From behind, as is done with traitors.

In 1961, the wreck of the Andrea Sgarallino was discovered at a depth of sixty-six metres in front of Punta Nisportino (Lat.42 44/991 N Long.010 2F.545), lying on its port side and broken in two. Today, in the depths of that portion of the sea, the wreck lies accompanied by a laconic commemorative plaque: in memory of the victims of the steamer “A.Sgarallino”. In memory of Ciano Galeazzo, instead, there are many streets, squares, buildings and plaques in various Italian cities.

(We only remember what they make us remember)