Filippetti S 55: Davide Cipriani tells us about the genesis of a masterpiece

Davide Cipriani, designer of the Filippetti S 55, explains how this project was born

It’s one thing to design a fashionable boat, it’s another to design a boat that will never go out of style. For further details about the second option, please ask Davide Cipriani, the designer of the Filippetti S 55, a yacht destined to remain fashionable even in half a century.

If we wanted to describe the flagship of the Italian shipyard, we could use a multitude of oxymorons: this yacht is sporty and refined, aggressive and graceful, classic and innovative at the same time. And it is precisely thanks to this continuos game of contrasts that the S 55 is destined to remain suspended in time for a very long time.

On board the flagship model of Filippetti Yacht, the past relives and the future is now. Davide Cipriani (CentrostileDesign) placed the hourglass horizontally and forged an open yacht of absolute beauty. And beauty, you know, is an ageless concept.

We met the well-known Italian designed at the 60th Genoa Boat Show on board his masterpiece and, sitting comfortably in the cockpit, as well as rigorously distanced and “masked”, we were told about the gestation, birth and evolution of this cruiser with a strong personality and traditional vestiges.

A neoclassical work of art declined to yachting. 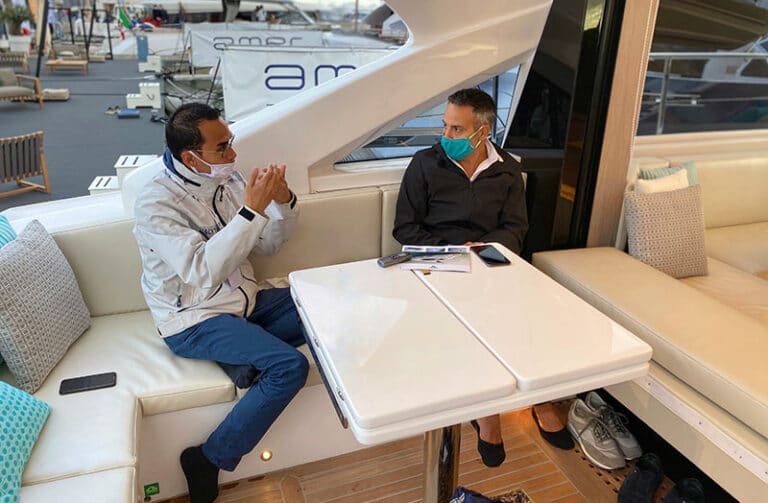 “The S 55 originates from an important graphic project based on the volumes, brightness and muscularity of the boat – Mr. Cipriani explains. Indeed, as soon as we climb the steps that, from the stern platform, lead to the cockpit, we are impressed by the large living spaces, the great amount of light filtering through the large windows and the sturdiness of the entire structure.

” First of all, we brainstormed on the amplitude of the volumes, tracing a hull which was more imposing than that of other boats, sleek, dynamic and massive, especially in the rear part, at the same time. Secondly, in order to maximize volumes, we applied on them what is the design tool par excellence: light. Speaking of light, the initial project included an all-glass hard top. Only later, we decided to insert the mullions, all minimized in size to enhance light, thus without sacrificing nothing in terms of graphics but maintaining transparency and an excellent field of vision even in height. With the implementation of two long windows in the deckhouse, the light penetrates abundantly even below deck “. 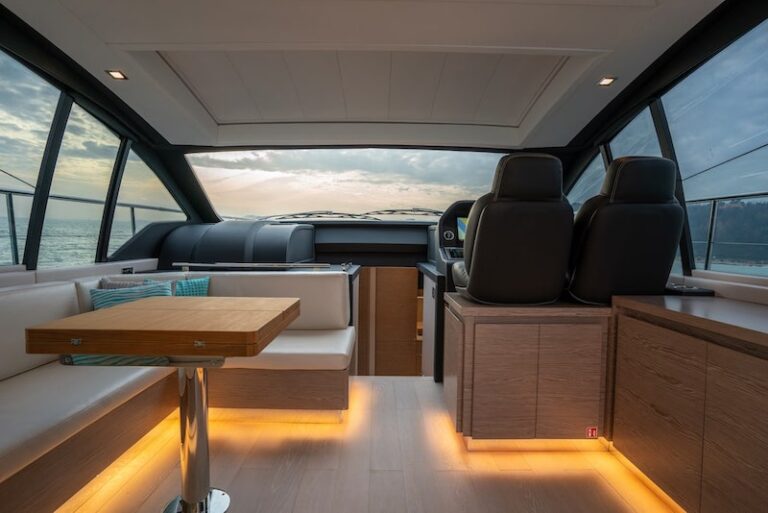 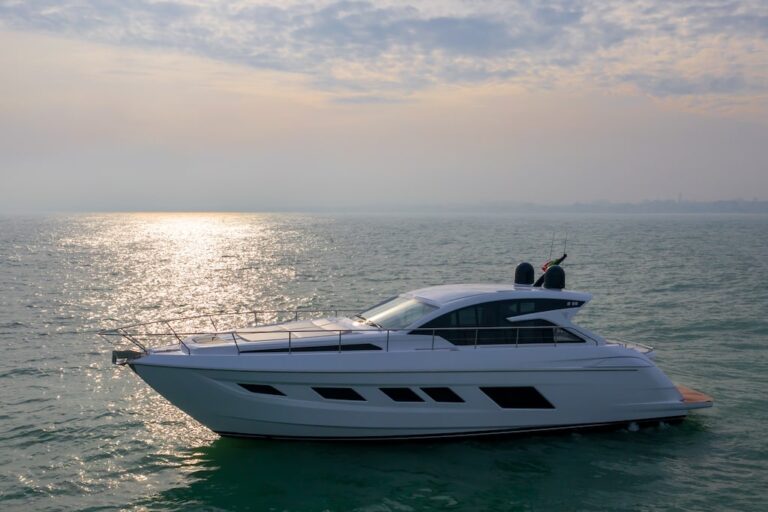 The door (on the sea) that is not there 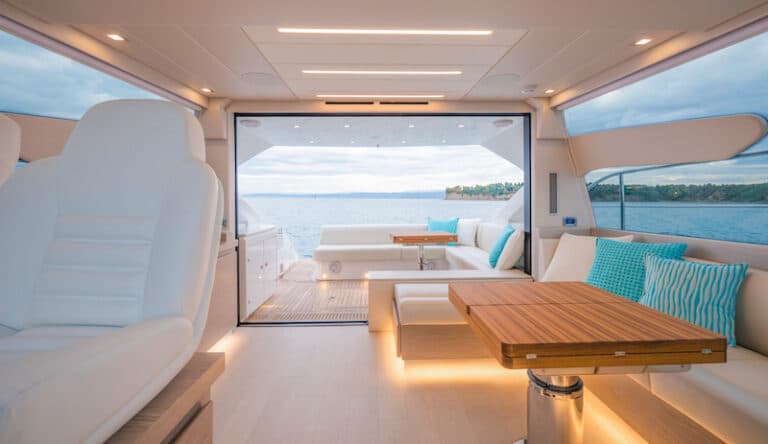 One of the crucial steps of the S 55 project was the design of the large glass door which disappears and appears from the main deck walkway, favoring a “territorial continuity” between the cockpit and the lounge. Designer Cipriani was thus able to create a sort of penthouse on the sea, exploiting the fleeting and changing division between inside and outside.

” The first concern was the lounge zone entrance – Mr. Cipriani tells us – I spent many hours talking about this possibility with Giovanni and Fausto Filippetti but what you can see now is not the entrance we originally had in mind: we were thinking of a cheaper door, in line with the market, but Giovanni wanted something exclusive. Hence, the idea of this automated door that, today, represents the DNA of the boat. Without this retractable glass door, the space in the living area would be halved. Instead, we have a salon worthy of a superyacht, rare to find on a boat of this size”.

The lower deck is a fully-fledged apartment, surprisingly generous in height and consisting of a large master cabin, two VIP cabins (one with bunk bed, another with a queen-size bed), two toilets and a comfortable kitchenette located in the wide hallway. 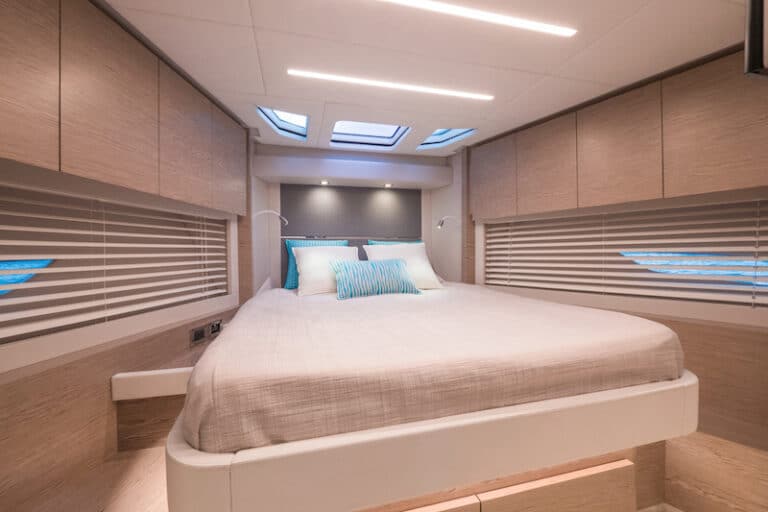 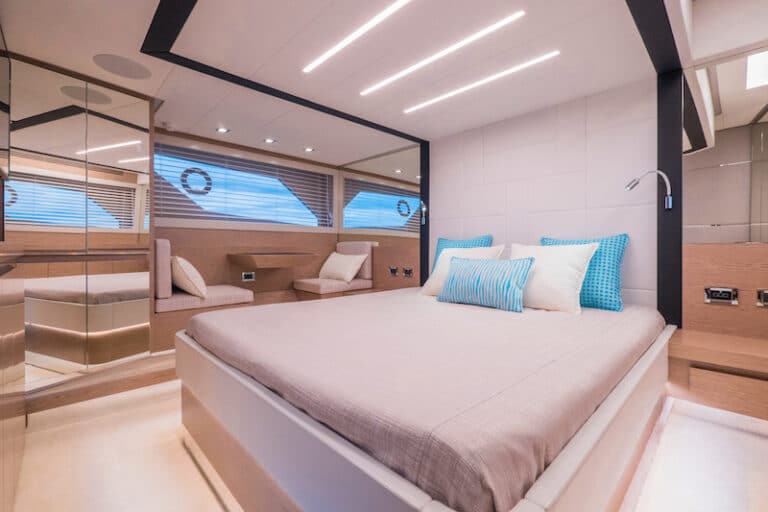 “The large interior space derives from the use of a hull that is on average higher and wider than a conventional boat. The purists, the conservatives, are skeptical about the centers of gravity, but today technology has changed profoundly: first of all, because today’s hulls are more versatile; secondly, because new tools, such as seakeepers, are available. As a result, contemporary designers can take a few more liberties than in the past without giving up height as in the past: technology accomodates us very much”. 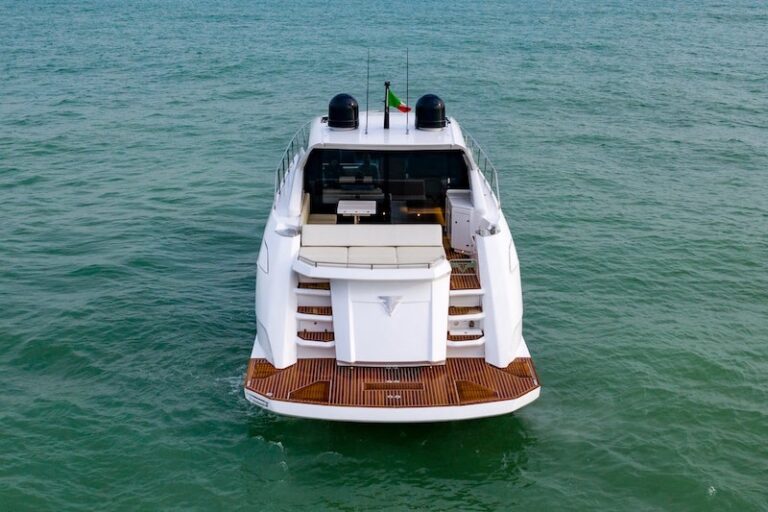 The Filippetti S 55 features extraordinary and well-distributed spaces. “Proportion is an essential feature of my projects: I prefer designing something less beautiful but more proportioned. For many shipyards, proportion is a problem. For me, instead, it’s the starting point. Proportion goes hand in hand with an organic and unitary design: details are important but exaggerations should be avoided because what really matters is the unity of the boat, which must be functional and tidy at the same time”.

“Design should not be an excess of details: as the Americans say, “less is better“. From this point of view, the S 55 is a traditional boat inspired by a neoclassical automotive style, based on the harmony of shapes connected to the logic of volumes and made contemporary by the most modern and sophisticated technological functions. All this makes the S 55 a timeless boat that will never get old “.

However, the Filippetti S 55 masterfully designed by Davide Cipriani is also fast. Powered by twin Volvo Penta D13- IPS 1200 engines, 900HP each, she can reach an extraordinary top speed of 40 knots. Not bad for the IPS version, considered as the “quietest” among the options available. Indeed, the designer concludes, ” the Sport 55 conveys speed even when stationary“. Seeing is believing. We believe it: we have already tested her! 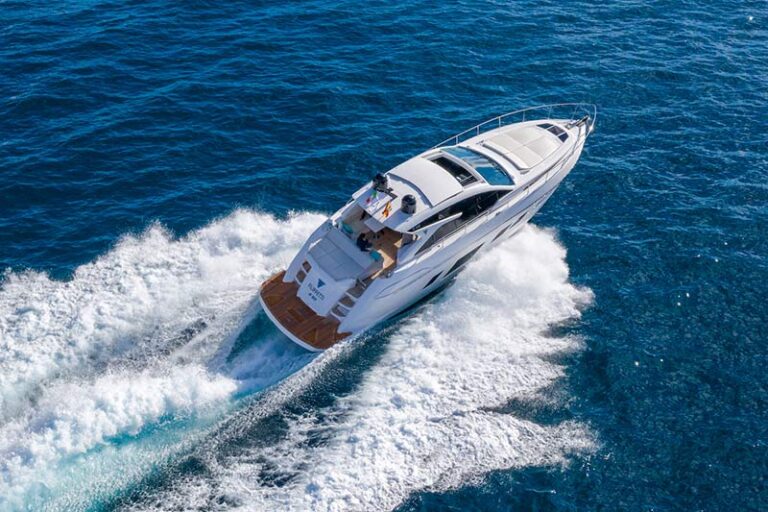 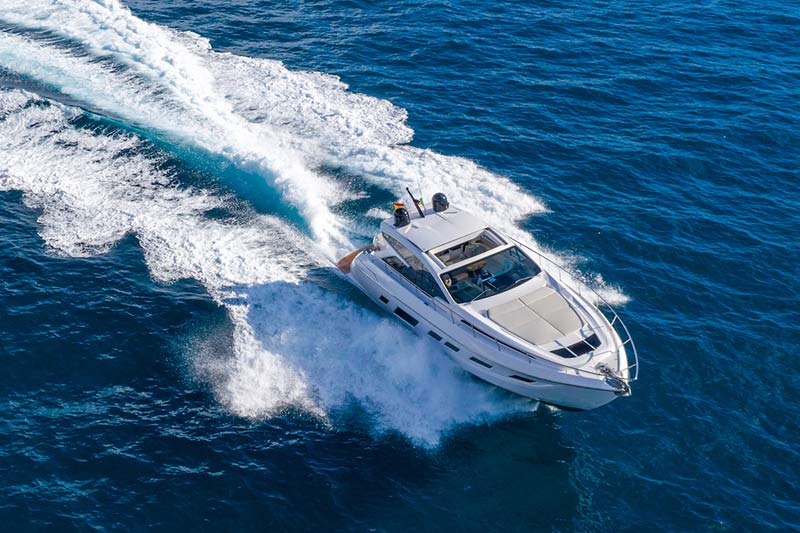 Click here to visit the page dedicated to Filippetti Yacht on our Virtual Boat Show.

Umberto Felci and the evolution of the bluewater cruisers

Filippetti F 100: an elegant super fly with a sporty character