A large number of people have come to the Magazzù booth on this opening day of the 61st Genoa Boat Show. At the ‘H’ quay there are two Maxi-Ribs from the well-known Palermo-based boatyard: the MX11 Coupé and the MX13 Grand Coupé. The reason for such interest is the quality of these high-class boats, which also find buyers among well-known personalities. We had the opportunity to see them again and go on board. And the impressions we gained from recent tests of these inflatables are even clearer today. 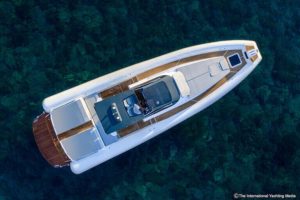 Gran Coupé offers a great deal. Starting with the stern, which has a large sundeck. The cockpit imposes almost no obstacle with the sea, thanks to the sides that are not too high. The deck house follows the arch of the boat, rising just enough to make room for the entrance to the cabin, which also has an excellent introductory space with the head ton the starboard side. The curved door – glazed, darkened and modern – slides to help the owner exit from below deck. The dashboard has been designed with great care, starting with the windscreen which embraces it, providing protection from the sun on the instruments; the dashboard can accommodate as many electronics as you like. Moreover, the windscreen has grab handles on the upper profile and these help when crossing the side-decks towards the bow. This is where the ample cushions come in, fully meeting the criteria of refined design, the result of ingenuous creative thinking. Yes, in this sense Magazzù knows how to differentiate itself from competitors. 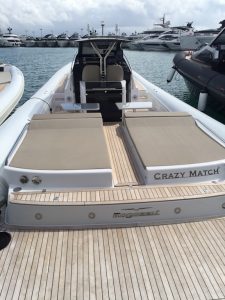 The whole boat expresses a strong Mediterranean taste, there is a passionate feeling for the sea linked to a fulfilled history and philosophy. The MX 13 conveys marine taste with a certain sensuality, and this is on everyone’s lips. Look at the deck house and the subtle moustache of the windows stretched towards the bow: they are a real feature. They provide plenty of light in the cabin along with the large porthole in the forward deck. Its end is marked by two important bollards, close together and parallel. There are also two galleys: the inner one with a small cockpit fridge on the top where there is also a sink. On the outside, behind the cockpit seats, there is a cupboard unit with an induction hob, sink and fridge underneath. The whole layout fits in well with the teak-finished deck, outlining the central part of the boat, dominated by the t-top that shades the two aft tables. Let’s stay at the stern because there’s so much to see. And it’s those details that become the real advantage when sailing. For example, there are two sundecks with handrails to make it easier to get up after sunbathing. Furthermore, the entire deck area on which they rest can be raised by means of an electric control, revealing a tidy and therefore easily accessible engine room. 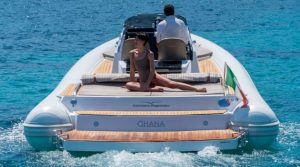 meters wide, MX11 Coupé is a slightly different world from its ‘older’ brother. Although the layout is similar, with the cabin having a head with shower, and indoor and outdoor kitchen areas. The dashboard is a little more simplified. There is, however, a sensible footrest under the steering wheel. The T-top is detached from the console windscreen. But to better describe the onboard allure, soft and sinuous lines emerge, starting with the cream-coloured aft sofas that occupy the half-moon deck. But be careful because both Magazzù Maxi Ribs on display and Genoa offer a very convincing feeling of space on deck. That’s the first impression you get when looking at them from the quayside: the teak lines on the deck create an almost infinite perspective. There’s plenty of space and it feels even more so.

An ‘icon of luxury’, no doubt, because the MX Coupé and Gran Coupé introduce an innovative symbol of Made in Italy boating.

For visits on board the Magazzù boats during the boat show, please visit the official website.

Rio Yachts: DAYTONA 46 is the “rose of the Genoa Boat Show”