The historic nautical clothing brand Slam is back in grand style. Founded in Genoa in 1979, the Slam brand was acquired last July by the Italian holding company Vam Investments, owned by Francesco Trapani and led by Marco Piana, who presented its relaunch to the public at a special event held last 31st May in Milan, with the eloquent title ‘Slam is back’.

Slam’s CEO is Enrico Chieffi, who boasts a prestigious nautical palmares: world champion in the 470 and Star classes, tactician of the Moro di Venezia, two-time Olympian champion (in 1984 in Los Angeles and 1996 in Atlanta) and then successful manager for 23 years at Nautor’s Swan. “The first goal we set ourselves,” said Enrico Chieffi at the opening of the event, “was to represent the excellence of technical sailing apparel in the world. Hence the decision to become technical partners of the Italian Sailing Federation and to direct our operational strategy towards the creation of a ‘dream team’ for tomorrow’s champions growing up on the Optimist, the offshore racing for us represented by the maxi Arca SGR 100′ yacht and the trimaran Mana”. 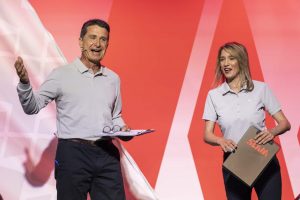 “We also want to play a leading role in inclusive and sustainable sailing with One Ocean Foundation and the Leon Pancaldo project,” Mr. Chieffi continued. “Last but not least, we have confirmed our partnerships with the Yacht Club Costa Smeralda and the Yacht Club de Monaco. In line with this positioning of content and substance that aims uncompromisingly to achieve excellence, we have revisited the original Slam logo in a modern key and planned strategic choices that envisage the involvement of athletes and boats as true partners in our path of comparison, research and innovation on technical clothing to be tested on the various race courses in all weather conditions”.
“This way,” concluded Slam’s CEO, “the public that will purchase Slam clothing in its Pro, Custom, and Outdoor lines will do so with the awareness of the path that has characterized the product and with the certainty of its quality, also guaranteed by the competence of the champions that work alongside us. All this will be evident shortly with the presentation of our new collection. At the same time we are offering the champions who work alongside us great media visibility to promote the world of sailing and to make them known to the general public. A visibility that you have certainly already appreciated today in the most important national newspapers and that you will appreciate even more for its public prominence, because it represents the main mission of our communication strategy”. 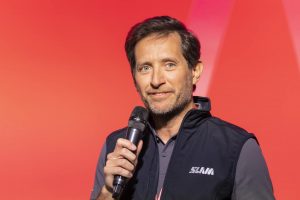 At the end of his speech, Mr. Chieffi invited Marco Piana, CEO of Vam Investments, to the stage, who explained the reasons for investing in the brand: ” Slam and the passion for sailing are intimately connected in the heads and hearts of all of us. In its 40 years of life Slam has collected a lot of stories to tell: Slam first of all is Genoa, the spirit of Genoa with its lantern that appears with its coordinates on all our products; but Slam is also the young athletes that it sponsors and helps grow, it is Furio with his successes, who is here with us and with whom I had the honour of winning the Barcolana 53″.

“With my partner Francesco Trapani we asked ourselves who to put at the helm of this dream,” added Mr. Piana, “and it was a difficult choice, because we live in a world that is made up of so many empty slogans and we wanted to make sure that Slam spoke of the sea and of concrete values. So we went to find a unique person not just around the corner, in Finland where Enrico was building sailboats for dreamers who don’t set limits, and we convinced him to join this adventure. He is a unique person because he is a manager who can lead a company with vision, with passion and in his spare time while others are resting, and he wins European championships as a young man. The challenge is not easy and we know that the destination can be very far away, but we have learnt one thing: those who love navigation more than the destination often manage to get very far. So today is an opportunity to be here with you, to cast off our moorings and set off with Enrico and his entire team on a journey that we hope will be a long one. 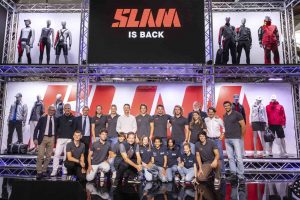 The highlight of the event was the catwalk of honour dedicated to the new Slam collection, inspired in its design by the latest technical innovation that has revolutionized the sailing world, namely foils. It is a sustainable collection in its strategic design choices, with production returning to Europe and Italy for 35% of the items, and in the choice of materials and processing techniques used.

The Slam 2022/2023 collection is rational to the point of being essential, but at the same time offers almost 1,000 possible combinations with only 125 items in the sample collection.

Andrea Razeto, Icomia and the global goals of the boating industry

Quick thrusters: a series of videos to explore them in detail

Absolute 56 Fly, the sea trial of a queen