Cantiere del Pardo sets a trio of aces at the Cannes and Genoa boat shows. Three brands will be presented: VanDutch, Pardo Yachts and 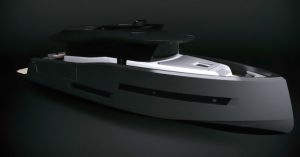 Grand Soleil Yachts. A total of 11 boats will be moored at the two September events, including a world premiere: the Endurance 60. So many boats on display are a clear sign of the Forlì-based yard’s significant growth, especially over the last 5 years. In fact, 2016 saw the birth of Pardo Yacht, and the end of the second quarter of 2020 marked the acquisition of the Dutch company VanDutch, an encore that duly covers the segment of luxury motor yachts.

The company’s history drives the dominant character of this boatyard, which has produced 4,500 high-performance yachts since its establishment in 1973. The most traditional brand in the triad is Grand Soleil Yachts, ultra well-known in the sailing segment. These yachts have a hull and deck sandwich construction with fibreglass and resin impregnation, plus carbon reinforcement. Being a leader in the yachting sector means producing sturdy boats, and this is something Cantiere del Pardo does not skimp on. At the helm are Fabio Planamente and Gigi Servidati. Cantiere del Pardo has 40,000 square meters of facilities, divided into three macro-departments dedicated to lamination, joinery, assembly and testing in test tanks.

“VanDutch: when class meets water”, we wrote. In fact, this is true. The VanDutch 32 was premiered in Torre S.Marco, in Lake Garda, this summer. More than astonishment there was the silence that is usually reserved for the contemplation of worthy things. The Vandutch boats are worthy of the collection of a modern art museum: composed, rational, expressed in shapes that perfectly modulate among themselves and the water. And above all, they are unostentatious and unprovocative. A luxury that doesn’t seek celebrity but only class, great class.

The VanDutch art will be exhibited at the 61th Genoa Boat Show, quay E, booth 501-513. As visitors stroll along, their eyes will fall on two beautiful ladies: VD 32 and VD 48. The premiere at Cannes and Genoa is the VD 32. Technically speaking, the boat concentrates from the stern to the cockpit, both protected by the bulwarks. The bow is totally uncluttered. The interior boasts a cabin with ultra-modern luxury furnishings. She measures 9.81 metres in length with a beam of three. Refined Silvertex upholstery and noble materials contribute to the low weight of 3,400 kilograms. Power comes from a Volvo V8 430-CE petrol engine; two Volvo 2.8 litre six-cylinder diesel engines are offered as an option.

A million euros or so gives 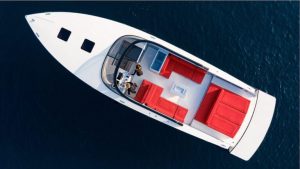 access to the luxurious VD 48 premiered in Cannes. The cruising speed is 34 knots. The boat is 14.62 meters long. The bow is vertical and maximum speed is 38 knots, with power coming from twin Volvo 725HP engines. VD 48 is an ultra-refined day-cruiser or a superyacht bold-tender. The totally open deck forward area contrasts with the large aft cockpit, protected by the bulwarks, and a hydraulic beach area aft. VD 32 and 48 will be on display at the Cannes Yachting Festival from September 7-12, Vieux Port, booth QSP 154.

Endurance 60 represents the world premiere in Cannes and Genoa. The name, borrowed from a Martian rover, is a good illustration of the constancy and endurance at sea of this ultra-modernized trawler. The initial impact is that of a classic trawler, but with a charm that makes it highly attractive. It cruises at 20 knots and has a top speed of 25. There are lots of spaces, from the enormous flybridge to the panoramic main deck with vertical windows that open out to the whole sea, and the lower deck. Here, the master cabin is extended over the maximum beam, large with a very large head. VIP cabin at bow with bathroom. A third cabin with two single beds. At the stern, the bulwarks can be lowered. Overall length is 18 metres, while maximum beam is 5.10 metres. The deck is walk-around. Contributing to this marine beauty are the hull lines designed by Davide Leone and Nauta Design for the interiors. 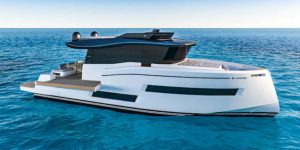 Endurance 60 will be put on display at the Cannes Yachting Festival, Vieux Port, quay QSP 158. The Genoa Boat Show will house the Pardo Yachts range at quay E, booth E501-E513. The other nautical jewels on display include the Pardo 38, 43 and 50. The “small” 38 is tapered, rational and elegant. White livery, teak-finished deck, dark contrasting t-top. The Pardo 38 is a walk-around with wide side-decks to port and starboard that allow for easy movement all the way to the bow. She is also equipped with internal handrails on the sides. A gem that boasts combinations of inboard and outboard propulsion.

Launched in 2017, the Pardo 43 is a planing yacht with a hull designed in vinylester resin infusion and a monolithic keel. Design is by Zuccheri Yacht Design (we wrote about this here). Pardo 50 is a luxury yacht with high performance and comfort. She gets up on plane in safety and high speed. The overall length is 16.25 meters, with a beam of 4.95. Read about her launch in Miami here. 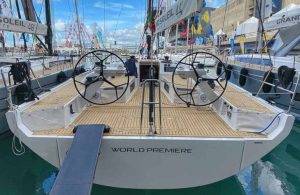 Grand Soleil Yachts is a brand with almost half a century of history and will be exhibiting at the Genoa Boat Show, in the Sailing World Area, booth B3. The yachts on display are: GS 42 LC, GS 46 LC, GS 52 LC, GS 44, GS 48 (click on the links to read about sea trials). With the only exception of the GS 44, they will also be exhibited at the Cannes Yachting Festival, Port Canto, booth SAIL 177. New for the Cannes Yachting Festival will be the GS 44, which was exhibited in Genoa last year. The GS 44 is a masterpiece of performance. A brilliant cruiser-racer, she is perfect for both racing and family cruising. The deck can be fully customized and can be fitted with either four or six winches. It can also be fitted with transverse rails. The boat measures 14.96 metres with a maximum beam of 4.26 metres. Elegant and refined, its recessed mast gives it a greater J. The naval architecture is by Matteo Polli. The GS 44 is also available in the “Performance” version.

To book your boat visit, please write to: info@cantieredelpardo.com.