Aeolus triumphs over Neptune and steals his sea (and currents). These are the classic times marked in the generational lead of Fabiani Yacht’s nautical engineering for an eco-sustainable future. From the Livorno-based shipyard, the new superyacht Ibrida 101′ will set sail together with the entire range of seven other models: Wedgeline 77 (also hybrid), Ibrida, Classica in the 100’ and 70’ versions, and the Classica 101’. A (silent) course towards Genoa’s kermesse of nautical beauty from September 16-21, where mooring will take place at quay H, berth YH103. 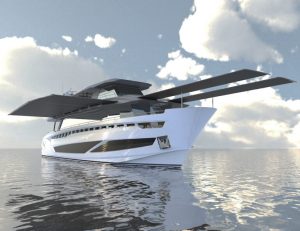 for its respect for the marine environment, and it does this by introducing a patented system of retractable panels on board its yachts and superyachts that, in operational terms, equal the production capacity of a real photovoltaic field: in some cases, they produce over 150 kilowatts, the equivalent of almost 38 residential villas. Such respect for the environment will certainly not go unnoticed by the public if owners opt for a Fabiani Yacht hybrid yacht. Because, as we all know, the status quo is also and above all dependent on the increasingly stringent requirements of climate change. An added pro? With the hybrid you can sail freely without fines in protected marine areas. Fabiani Yachts also comply with the CE Class A – “Oceanic” category, i.e.: wind over 40 knots and waves over four metres.

30 futuristic meters for the Ibrida 101’ 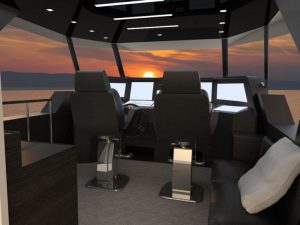 Looking at the Ibrida 101′, a superyacht with a length of over 30 meters and a maximum beam of 6.73, the observer immediately thinks of a future worthy of the exploration of exoplanets in the cult film Interstellar. But that’s not the case: Ibrida 101′ exists on this Earth and wants to sail the seas exploiting wind energy to the full. Fabiani Yacht’s philosophy is summed up in a maxim of its founder, Maurizio Fabiani, when he explains that “As much sun the Futura Ibrida 101 sees, as much sun she transforms into the electrical energy needed to sail all day without having to use batteries and to guarantee over seven consecutive hours of autonomy at night”.

Hybrid 101′ with all the energy of the sun

Open to the sea at 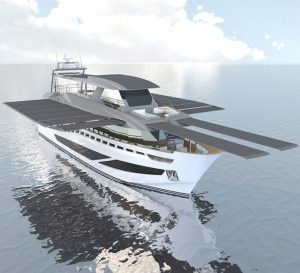 the stern, west and east, protected at the bow by an immense semi-circular window, the flybridge of the Hybrid 101′ is entirely enclosed to increase the surface area of the flush-fitting panels. Two “gangways” of separate photovoltaic modules extend out from the bow of the flybridge suspended over the sea, and a further two fields of modules emerge from the deck at the base of the flybridge and retract to completely disappear. The engine is also diesel and pushes the Hybrid 101′ to a maximum of 24 knots, while cruising is 21 knots. The electric motors, on the other hand, allow a maximum speed of eight knots and a cruising speed of six. The result of the electric propulsion, in addition to zero decibels, obviously allows absolute fuel economy. There is also a careful eye on safety, because the photovoltaic array automatically retracts in the event of strong winds, thus depriving the superyacht of its impressive structural-photovoltaic sail. There are also six modernly furnished cabins on board for the owner, guests and captain, and two cabins for the rest of the crew.

Another distinctive feature of Fabiani yachts, which range between 23 and over 30 meters in length, is the presence of a patented stern platform, “which can be positioned between a depth of about one metre in the sea, up to flybridge level, and also aligns perfectly with the harbour pier, allowing a small car or motorbike to come aboard and park in the garage or on the flybridge”.

Fabiani Yacht will be present at the Cannes Yachting Festival, from September 7-12, at Palais des Festival, booth 067. Maurizio Fabiani has just announced that “ a new Fabiani Yacht sales office is being set up in the Marina Cala de’ Medici in Rosignano Solvay”.

Monaco (Super) Yacht Show: how big you are!

MCY 105 Skylounge: The one and the only

Mussini Giorgio Srl: Corvetta 24 and Paraggina 10 at the boat shows