On the morning of July 12th 1831, the sun was shining on the elegant hats of the women strolling through the San Domenico square in Sciacca, the wealthy seaside town that is the pride of the province of Agrigento. The men were chatting in front of the bar. Suddenly a roar terrified the crowd, on the horizon an imposing column rose from the sea pointing to the sky. “A ship is on fire” someone shouted.

That same morning, the sun was also shining on the port of Palermo. Captain Francesco Trafiletti, having disembarked from his brig “Gustavo”, rushed to the harbourmaster’s office: “Sad omens in the sea at Sciacca” he gasped, dropping onto a chair. “I was sailing in the Strait of Sicily, opposite Sciacca, thirty miles from Capo San Marco, right near the shoal. Suddenly there was a very violent explosion, columns of water from the sea to the sky and flames and smoke, columns of more than fifty metres… the waves were gurgling as if boiling… I turned to port and sailed away from the course but the sea was still boiling… the fish floated to the surface dead…”. 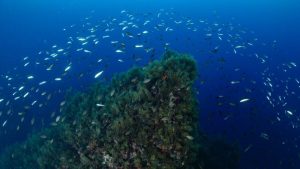 The news spread and physicists and geologists came from all over to explore the new island and study its organic composition. The first to land was Karl Hoffman, a professor at the University of Geological Sciences in Berlin. After a thorough examination, he reported the results in a letter to the Duke of Serradifalco.

On August 17th, King Ferdinand II, Bourbon King of the Kingdom of the Two Sicilies, sensing the international interest aroused by the island, hastened to include it in his kingdom: located between Sicily and Tunisia, the island would have been an important hub for maritime trade and control of the Mediterranean Sea. He gave it the pompous name of Ferdinandea Island just to make its sovereignty explicit. Yet the representatives of three countries landed on the island, each raising their own flag, each giving it a name: Captain Jean La Pierre of a French brig christened it Julia, Captain Jenhouse of an English frigate christened it Graham. The last to land, the Spanish, called her Nerita.

From the Palace of Caserta, King Ferdinand II announced: the island is ours, they are violating our territorial waters. More than once there was a risk of international conflict. In particular, in mid-September 1831, the Italian corvette “Etna”, which had just set sail from the Ferdinandea island, found itself bow to bow with the English frigate Janhouse. A firefight seemed imminent. Then, as in the ancient Greek poems, a god ex machina defused the tension and thanks to the mediation of Captain Corrao and Captain Jenhouse, the issue was referred to their respective governments.

Ambitions for the sovereignty of the island did not cease, diplomatic delegations travelled from north to south negotiating all sorts of things. In the meantime, the wave-beaten Ferdinandea island was shrinking as far as the eye could see. On December 8th, Captain Allotta in the brig “Achille” noticed that all that remained of the island was “a column of hot water smelling of bitumen”. Negotiations were then concluded: sovereignty over the island that no longer existed could be granted to the Kingdom of the Two Sicilies, to everyone’s satisfaction. 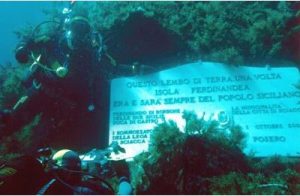 volcano awoke and in a few days a new islet was formed. The controversy flared up again. The Times headlined: “A British island emerges from the Mediterranean”.

By the next day, the sea had swallowed it up. In the same place, a little over a hundred years later, while the earthquake devastated the Belice region, the waters began to boil, perhaps heralding the appearance of yet another Ferdinandean island. This was not the case, but there were reports of some movement of British ships from the Mediterranean fleet.

The submarine volcano, which has now been discovered to be one of the accessory cones of the Empedocles submarine volcano, did not produce any new islands, but to avoid any misunderstandings and to avoid the risk of invasion by other states, in 2002, following new seismic activity, Sicily sent divers to put a plaque on the Gramh Bank (the name of the submerged area of the Ferdinandea island).

The plaque reads: ‘This strip of land, once the Ferdinandea island, belonged and will always belong to the Sicilian people’, as if it were imaginable today that one state could invade another to take over territories that are not its own! The 1800s were the period of imperialism, the time in which borders were drawn, the foundations were laid for respect for the self-determination of peoples and national sovereignty. So today would be a different story… or would it?

Cybercat kit turns Tesla Cybertruck into a boat for $23,000.