Marina di San Lorenzo, “the jewel in the crown” of the Riviera dei Fiori, is much more than a marina: it’s the best visiting card to fully experience the surrounding territory

A jewel in the heart 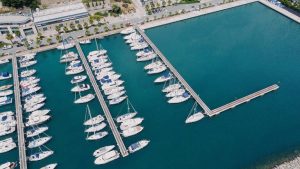 of western Liguria. The jewel in the crown of the Riviera dei Fiori. The Marina di San Lorenzo is much more a simple recreational port. It is a quiet corner of comfort where boat owners and visitors can find a lot of intimacy far from the more crowded Imperia and Sanremo, between which the tiny village of San Lorenzo al Mare is practically halfway.

And it is precisely in the smallest municipality in the province of Imperia that the Marina di San Lorenzo is located, a jewel within a jewel, set on the sea and surrounded by a territory that is perhaps still little known and therefore particularly fascinating from the point of view of the landscape and beyond. 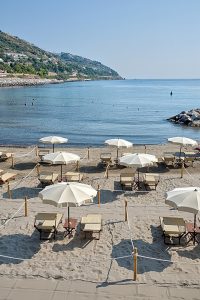 With 260 berths – including 7 for 40-meter boats, 2 for 26-meter yachts and others for 20-meter boats – the Marina di San Lorenzo tells the story of this territory steeped in tradition in a modern key, which is the spirit that characterizes the San Lorenzo al Mare marina.

A marina that is always in step with the times, capable of renewing itself – a comprehensive restyling of the facility has been recently completed to make room for superyachts – but also of jealously guarding its roots and proudly illustrating them to those who choose to moor their own boats in the marina or stay at the Hotel Riviera dei Fiori, inside the port.

The Marina di San Lorenzo staff offers its guests a wide range of recreational activities to immerse them not only in the beautiful blue Ligurian sea – the marina has its own equipped private beach – but also in the lively atmosphere of the Riviera or the disenchanted atmosphere of the hinterland.

Services include bike rental and tours along the Riviera dei Fiori cycle path: 24 kilometers (one of the longest routes in the Mediterranean) running along the coast, from Ospedaletti to San Lorenzo al Mare, passing through Sanremo, Arma di Taggia, Riva Ligure and Santo Stefano al Mare, for a holiday dedicated to sport but also to the beauty of the landscape on western Liguria. 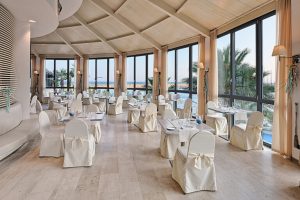 Moreover, San Lorenzo al Mare is a stage of the  Classicissima Milano-Sanremo, which takes place in spring and marks the opening of the international cycling season.

The Marina di San Lorenzo also offers mountain bike excursions: for the more experienced, we recommend the trip on the top of Monte Faudo, 1,151 meters, which offers a breathtaking view of the Tyrrhenian Sea, or the Via del Sale, the spectacular ex-military road that winds between 1,800 and 2,100 meters above the sea level along the French-Italian border, an adventurous route interspersed with hairpin bends and Alpine passes.

Liguria is also good food. A centuries-old cuisine of exchange between the Piedmontese, importers of meat and cheese, and the Ligurians, proud of their fish products. In Dolcedo, an ancient village in the hinterland, the Marina di San Lorenzo team organizes food and wine itineraries led by a tour guide who accompanies guests on a true itinerary of flavours, including tastings, aperitifs, lunches and dinners, to discover typical specialities. 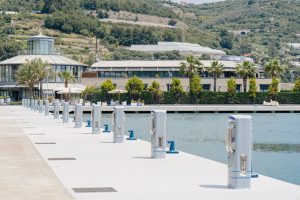 The Hotel Riviera dei Fiori – with rooms overlooking the marina –has its own excellent restaurant, Le Camelie, which offers the best of local seafood and meat dishes, and also welcomes external customers for breakfast in the dehors, located on the quay and on the private beach, as well as for lunches and dinners.

As far as purely yachting services are concerned, the marina provides 24-hour mooring assistance and everything the owner needs: water, electricity, toilets, showers.

There is also a shipyard, San Lorenzo al Mare Cantieri, which carries our ordinary and extraordinary maintenance, garaging, refitting, is equipped with 100-ton travel lift and offers a yachting charter service.

In conclusion, at the Marina di San Lorenzo, a small private marina aimed at a niche clientele, holidays are owner-oriented. A “bubble” of privacy and relaxation that can be easily reached from Genoa and Nice airports. Its proximity to Monte Carlo and Côte d’Azur makes it a strategic point for yachtsmen and others: the Marina di San Lorenzo is the best visiting card for those who want to experience the surrounding area at 360 degrees. 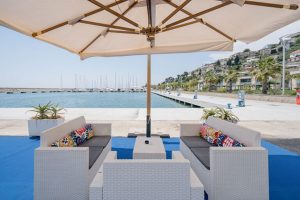