On test. Mercury Verado V12 600, the outboards that have changed the market 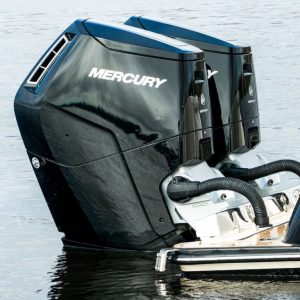 The progress that Mercury outboards have made over the last four years is simply incredible. A path that started in 2018 with the presentation of the V6 and V8, passed through the introduction of the fantastic 450R, and culminated in September this year with the arrival of the new Mercury Verado V12 600.

An impressive escalation that, through investment, technology and healthy “heavy iron” (Mercury produces all its engines in-house, starting from the foundry), has put an end to competition with other manufacturers, simply beating them to the punch.

But the new Mercury Verado V12 600 isn’t just a high-powered outboard. This new outboard is a real concentration of innovation, bringing with it many revolutionary new features, such as the two-speed gearbox and the steering rudder, solutions that clearly show the quantum leap forward made by the American manufacturer.

These engines are clearly destined to equip large-sized Maxi Ribs and medium-sized boats, which are increasingly preferring outboard engines over inboard engines for a whole host of good reasons, such as the cost of purchase and maintenance. It is no coincidence that the boat on which we tested these new jewels is a Sessa Key Largo 40, a yacht in its own right.

With the throttles at idle we leave the port of La Napoule. The two engines grumble almost imperceptibly as I realize that 12 cylinders and 7.6 litres is a lot, but looking at them, there’s very little extra volume compared to their smaller predecessors. 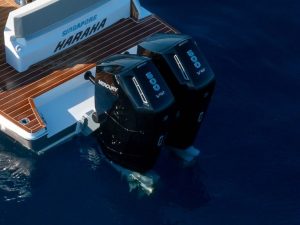 Sessa Key Largo 40 and, with three Verado 300s, we reached 40 knots with ease, but today I’m really curious to see what changes, both in terms of top speed and acceleration as well as fuel consumption because the Verado 300s are really “economical” and the comparison will be interesting.

For her part, the Key Largo 40 is a wonderful test bench.. She is a real yacht that, despite her sporty looks, has a luxurious interior complete with everything you need for long-range cruises.

With a displacement of around eight tonnes and an excellent ride on the waves, she’s perfect both for the test and for today’s sea conditions, which aren’t exactly calm.

I slowly move the electronic throttles forward and the two Mercury Verado V12 600s gradually start to play their music.

Yes, because the V12s have a sound of their own, a powerful yet elegant mix that immediately wins you over. To make you understand better what I mean, between the sound of the legendary 450R and the new V12 600 there is the same difference that there is between “Highway to Hell” by AC/DC and the chorus of “Tunnel of Love” by Dire Straits.

I accelerate a little more readily and the response from the engines is immediate, the torque is unimaginable and takes the boat out of the water in the blink of an eye, at 3,500 rpm we’re already on plane and cruising at over 23 knots. I turn to the display and my eyes glaze over, we’re consuming just over 60 l/h for each engine, it’s incredible! We’re even consuming less than with the three Verado 300s, while cruising almost silently, with almost total comfort.

I push the throttles all down and I’m literally nailed to the seat, the log is going crazy and spitting out incredible figures. The Key Largo 40 accelerates with great progression and quickly takes us through the 50-knot barrier where, to my renewed amazement, I see the flowmeter indicate a total of 360 litres per hour, or 180 litres per hour per engine, which for 600 horsepower is very, very little. 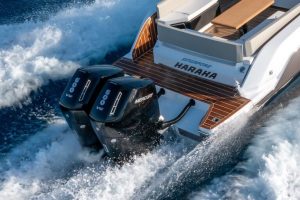 The most surprising thing about the acceleration test was that we hardly felt the “change” between first and second gear, which, as an innovation within an innovation, does not take place at a fixed number of revs but according to engine load. The difference in reduction between the two ratios is 20% and this system achieves a phenomenon similar to that of the “overdrive” which, after having used the maximum torque to get out of the water and having obtained maximum acceleration, makes the engine “relax” with a “longer” ratio. A system that further explains how it is possible to run with 1,200 hp at the stern with such low consumption.

But now it’s time to really squeeze the power out of these engines, so while I’m cruising at 30 knots or so and after asking the crew to hold on tightly, I get into it and do a series of tight turns and counter-turns that, thanks to the Key Largo 40’s proverbial hull, make the fun on board sky-high. The torque of the Mercury Verado V12 600 in these conditions can be appreciated even more, there is no way to put the engines in trouble, not even by slowing down and accelerating while turning. 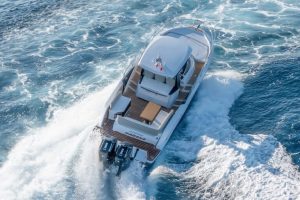 phenomenon is the total absence of any cavitation, the two counter-rotating propellers bite into the water as if they were studded tyres on the snow, without yielding an inch. All the power – really a lot – is inevitably re-transmitted and transformed into acceleration and speed.

But it’s not like being on board a Lamborghini or a Ferrari (although there are many similarities), these new engines are certainly sporty but not racing. Rather, the sensation is that of driving a Bentley Continental GT that, despite doing 0-60 in four seconds and exceeding 300 kilometres per hour, brings its owner to savour this performance in absolute comfort.

On the other hand, I’m willing to bet that Mercury Marine has plenty of other surprises in store that will originate from this engine. It has already done so by supercharging the 4.6 V8s and it has given us those fantastic 450Rs (those are real racing engines), who knows what it could do with these V12s …

With the new Mercury Verado V12 600 we have witnessed an epochal achievement, one that leaves its mark and, above all, forces the entire nautical sector to take note that progress does not stop. 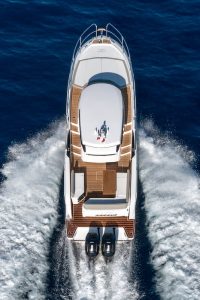 The other outboard manufacturers are aware of this, and in a short time they have fallen a century behind in terms of technology.

Shipyards are well aware of this, too, and thanks to these new outboard engines, which are increasingly being used on large fibreglass boats, they can now unleash all the creativity they can muster and market a new generation of boats that, for the same length, will benefit from much more space below deck, given the absence of an engine room.

Above all, the reasoning that guides the purchase of planing yachts from 40 to 60 feet in length will be overturned, where, historically, diesel outboards or, worse, IPS were preferred. Not that they aren’t great engines, but would you compare the savings in terms of purchase with outboards for those who do 100/150 engine hours a year? It wouldn’t take a lifetime to pay off the differential.

And then do you want to compare the manoeuvrability and trim of a boat sailing with IPS with the same yacht powered by a pair of outboards? Simply incomparable…

The arrival of these Mercury Verado V12 600s therefore opens up a whole range of fantastic prospects, prospects that will benefit owners who choose to purchase these wonderful examples of modern technology.