It sounds incredible, but Bjorn Dunkerbeck has set a stunning new record. A staggering 103.67 kilometres per hour, or 55.98 knots, were achieved while flying over 500 metres of “The Ditch”, Namibia’s famous canal where the water remains flat even when the wind blows really strong, as in this case, where the gusts reached 45 knots of true wind.

An impressive performance, especially if you think that he was sailing on a surfboard that was only 40 centimeters wide and that the “lane” of the canal was very narrow.

But Bjorn Dunkerbeck is no stranger to such records. The 52-year-old Dutch athlete can boast 42 world titles and six records, all of which have been recorded in the Guinness Book of World Records. 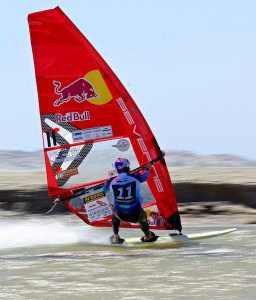 Although Bjorn Dunkerbeck had been able to make many fast passes in the last three weeks, he knew he needed a perfect day to break the 100 km/h wall. Only a day with strong winds and consistent gusts would allow him to exceed the 55 knots needed to break the record.

Then, on November 18th, the wind began to blow steadily and the gusts were around 45 knots. This was what Bjorn had been waiting for and once on board, he managed to complete five runs at speeds in excess of 100 km/h, with a top speed of 103.67 km/h on his best run.

The feat took place as part of the Luderitz Speed Challenge, an annual speed sailing event. Lüderitz is a port town in the Karas region of southern Namibia, one of Africa’s least hospitable coastlines. Here, the hot desert winds speed through the surrounding hills and, when they reach the cold waters of the Atlantic Ocean, create an incredibly strong thermal wind. In this area, the wind blows at over 35 knots at least three times a week, often reaching 40-45 and, more rarely, up to 50-65 knots of steady warm wind!

“I try not to crash at that speed because if you do, your day is over” – explains Bjorn, and you have to take his word for it, especially after watching the impressive images in the video.