Marine accessories on test: now it’s time for Douglas Marine mooring shock absorbers. Because if there’s one thing that worries owners of multi-million euro yachts, it’s that once they’ve left the dock, perhaps in the grip of the weather, the mooring lines will give way to the most unfortunate events. That is why we need mooring absorbers of the highest quality.

We have now started testing 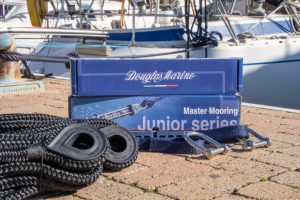 the Master Mooring Junior series using the Daydreamer, our lab-boat. Expectations are high, also because, perhaps needless to say, we are talking about an accessory produced by a historic company, absolutely Made in Italy and which seems to find no rivals worthy of the name in the market that it has been covering assiduously for 45 years in Italy and also abroad, where it operates through its dealers whose network seems to be expanding.

Expectations are also high because these absorbers have much reduced weights and dimensions compared to competitors, but are still able to cushion relatively large boats well.

The Daydreamer’s bollards will also thank us if the test doesn’t prove them wrong, because one of the known effects of Master Mooring is that it greatly dampens the forces insisting on the bollards.

Now let’s let the winter season take its course and see how these mooring shock absorbers will perform in the long term, maybe even simulating some neophyte “mistakes”, for example over or under-tensioning them. The excellent reputation of Douglas Marine mooring shock absorbers is that they resist oxide and rust very well, we will see how well this will be confirmed by the results of our tests. 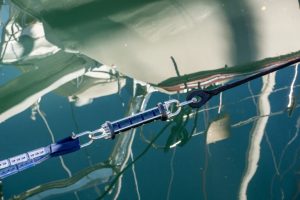 The delivery of the product we are testing took place at the hands of Paolo Ramoino, Sole Director and Legal Representative of Douglas Marine, who explained to us in detail much of the work that is carried out in the Segrate-based company, a work that this year has allowed him to double his turnover, which is expected to be just as high at the end of the coming year.

The mooring shock absorbers process is a detailed industrial production process that involves meticulous attention to every detail and is able to produce a product that is the result of craftsmanship at every stage of production.

The entire product originates from inside the factory, where the tie rods, absorber plates and other components are made by the workers who together make it possible to market a product that is, we repeat, high-quality.

This is also because in 45 years of company history, the experience that the staff bring to the table, including in terms of genuine customer feedback, is endless. And it has to be said even more: Douglas Marine mooring shock absorbers are patented and proudly so, because Douglas Marine was the first to invent this particular type of absorption operation.

Douglas Marine is well known for its mooring shock absorbers, but is equally famous for its anchor/chain connectors, including a self-righting one that boasts three times the power of its competitors.

Another popular product at Douglas Marine is the various models of ladders, which have been produced in excess of a thousand units this year. The ladders are well thought out in terms of ergonomics and specially designed so as not to hinder the ascent of sailors, but rather to facilitate it without impacting the design of the aft platforms. 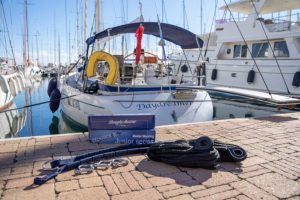 because Douglas Marine also sells its own (stainless steel) fender profiles, also produced in-house, with an overall production of more than 35 kilometres in 2021, which has been a great success among the many shipyard clients, especially because the profiles are developed using special machines that manage to obtain, in a single piece, a double bend, bending the steel cold so that nothing can be seen outside the bend. And the design improves. 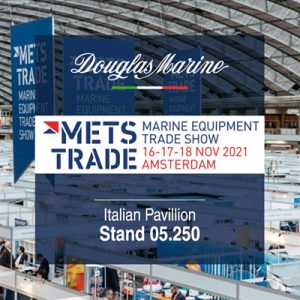 Paolo Ramoino, who has helped the company achieve its highest turnover since the year it was founded, explains that there are plenty of novelties at Douglas Marine: “We’ve redesigned our product packaging, renewed our communication through a completely new website and now we have a totally modern product catalogue. In addition to this,” continues Paolo Ramoino, “we boast a customer service that is always ready for shiphandlers, so every component of the mooring shock absorber, even after several years, is always available and can always be fixed, just a call away”.

Douglas Marine will be present at METS, from November 16-18, where it will also exhibit (stand 05. 250) the telescopic ladder “Portofino” that, partly immersed and installed in the stern, has an integrated handle that can be extracted and bayonet inserted, limiting the burden on board if not used, or facilitating the passage of the passenger, who so does not find the obstacle of the double neck constituted by the two classical handles that restrict the passage unfavorably at the time of the ascent on board. Douglas Marine will also be present at the next Dusseldorf Boat Show.