At the Cannes Yachting Festival, all I could think of was the Endurance 60. I wanted to sea trial this boat from Pardo Yachts, which has already revealed itself to the public as futuristic, innovative, different and absolutely philosophical. Within the Cantiere del Pardo nautical paradigm, the Endurance 60 materializes a substance that speaks of continuity between interior and exterior spaces, sustainable materials, silent navigation and low consumption. Then there are the propulsion: two standard Volvo IPS 700 engines are coupled with a specially optimized hull.

How will the Endurance 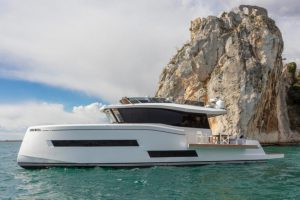 60 navigate at sea? Similar to a trawler, Endurance 60, however, strips away the typical trawler shapes with great class, revisiting and modernizing them to the point of being beautiful and bordering on futuristic. But although the Endurance 60 is likened to a trawler because of her semi-displacement hull, her performance actually belies this easy comparison.

Endurance 60 is designed to be well-performing both in displacement at 10/12 knots and on plane. And, we repeat, the CFD studies on the hull are intense and draw heavily from the Grand Soleil hulls built by Cantieri del Pardo. The displacement/performance compromise has been achieved. 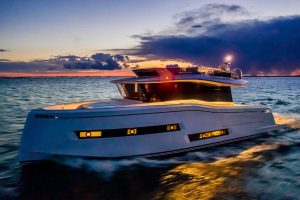 Endurance 60 proves to be well-performing during our sea trial. She does so thanks to the careful engineering by Davide Leone, who has designed a boat whose laden displacement almost reaches the weight of 34.7 tonnes.

On the morning of the sea trial I reach the Endurance 60’s berth at Port Canto. The unmistakable bow immediately offers all the classic Pardo Yacht feeling. I take off my jacket and forget the festive atmosphere of the boat show.

Asking for the maximum 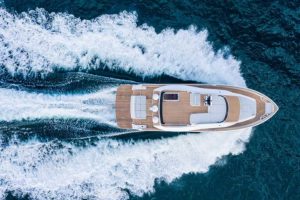 reached without me noticing too much, the display shows 2,280 rpm and fuel consumption is 238 l/h. The Endurance 60 is like a marine prodigy that in symbiosis with her environment absorbs, accepts and endures everything perfectly. First of all the sea, which in the meantime gets rough, preventing us from reaching a top speed of 23 knots. Secondly the water, which the hull’s hydrodynamics mould to perfection and rejects even the slightest splash on board. Then the wind, which perfectly adapts to the lines of the boat’s bow. Yes, the wind envelops me without swirling at all annoyingly on the flybridge, protected by a large semi-circular windshield.

I climb down to the stern because the wake is well worth the effort: perfectly outlined in a triumphal V, there’s not a single flaw to spoil it. When cruising, even at top speed, the yacht shows excellent stability and it’s not at all difficult to move on board from one space to another. At the helm I turn as if drawing a circle on the water. The Endurance 60 responds undaunted: stability and safety are also evident when turning.

Top performance for a cruising night 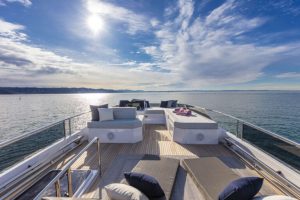 At cruising speed the yacht is absolutely silent and there are no strange vibrations. Measured in decibels, the great technology on board scores 59 decibels of ‘silence’. Please remember that acoustic science explains that sounds around 55dB are still ‘pleasant’. Who doesn’t like the sound of the two (optional) Volvo IPS 800 engines? Seen with my own eyes, once down in the engine room, accessed from the aft crew cabin, they are exhilaratingly beautiful. The crew cabin offers just the right amount of privacy for everyone. Among other things, it is directly accessible from the aft beach area and has two beds and a private head.

We were talking about silence 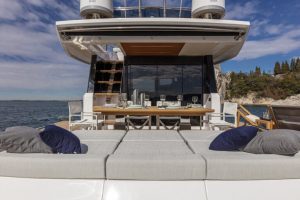 on board. It’s undeniable. When the cockpit is closed you can sail in peace and quiet, and that’s the aim of the Endurance 60 project, which was definitely created as a “day & night boat”. Designed for night-time cruising and daytime anchorage. When the Endurance 60 comes to a stop, in fact, the harmony of the spaces and elegance of the interiors take over even more. The cockpit walls open electrically and it’s the theatrical setting of a true ultra-luxury terrace, with all the beauty that comes with it in terms of adherence to the surface of the water.

The panoramic effect and comfort offered by the terrace encourage the guests to live the boat to the full. The boat is magnetic because it attracts from every point: from the stern to the ultra-spacious side-decks and the wonderfully furnished cockpit. In short, we confirm that “the owner is at the centre of the project” but the Endurance 60 often steals the show to give him the best possible cruising experience.

Interior integrated with the exterior 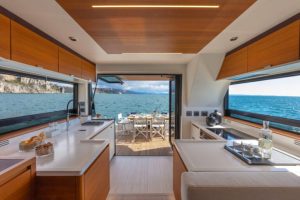 The Endurance 60 is a mosaic of beauties, because there are so many pieces that combine to create the perfection she offers.

The first is that of owning a craft which, in 18 metres of overall length and a beam of 5.10, offers important spaces, designed to expand and give a sense of infinity to the on-board dimension. Endurance 60 is an “open-boat” par excellence.

It’s enough to think of the full-beam master cabin, located in the central part specifically to provide significant headroom. The forward VIP cabin is available in a double layout with a double bed or “twin” beds side by side. The guest cabin, like all the others, has its own (beautiful) private head.

The interiors, designed by Nauta Design, are modern, always lit by natural light and a sophisticated LED lighting system that creates fascinating atmospheres at night. I gaze in wonder at the aft terrace, with its electrically-operated walls, its cockpit doors that open in full and its windows that descend, freeing the saloon from obstructions with no limits, both on the side-decks and on the stern. There is plenty of space.

Even Victor, the captain 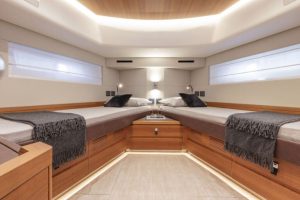 assigned by the owner as he pilots from the luxurious cockpit bridge, confirms that the boat “is a jewel“, in no uncertain terms. I look at the flybridge from the main deck: it is human-sized but spacious and well-proportioned.

It doesn’t feel like a ‘cathedral’ on the sea; on the contrary, it is leveled in a way that is suitable for the dynamics of navigation and dutifully respects the aesthetics of the boat.

What’s more, the Endurance 60 can be customized by choosing materials, fabrics and colours. The owner, a Parisian, has opted for a palette ranging from grey to a light, not too daring champagne colour. All in all, it’s true: “The timeless style of the Endurance 60’s lower deck is the epitome of authentic luxury”. 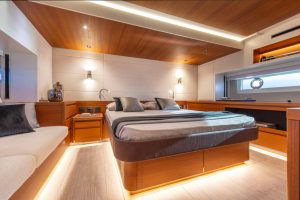