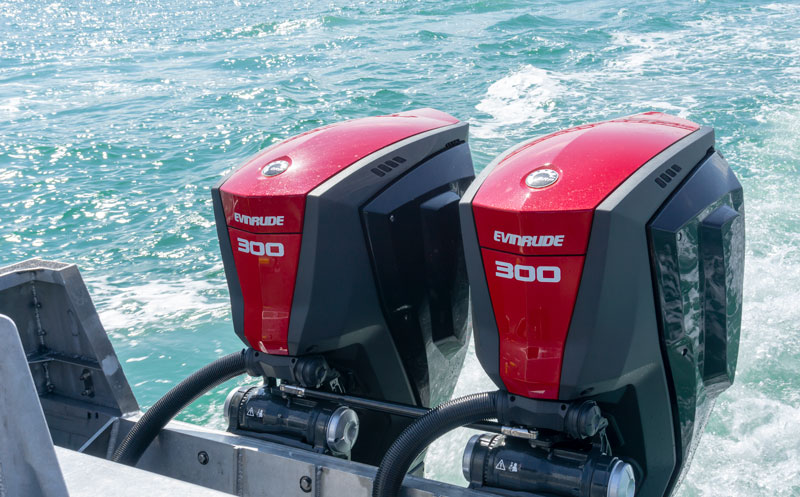 itself from all competing manufacturers with the choice to pursue the technological development of a range of two-stroke outboards. That of the American producer is a brave choice that has not just leveraged the emotions resulting from the promptness in terms of acceleration and reliability that are typical of two-stroke engines but is also innovative.

In addition to the torque, indeed, the range also has all the features specific to modern engines in terms of performance and fuel consumption without forgetting its eco-friendly nature. The E-TEC G2 series is equipped with an advanced electronic system that ensures full control of direct fuel/oil mixture injection management. This results into balanced fuel consumption and very low emission levels. It is no coincidence that the E-TEC series is classified as the cleanest range in the world. A real breakthrough and a paradox if we consider the shared perception of two-stroke engines that are generally seen as more polluting. 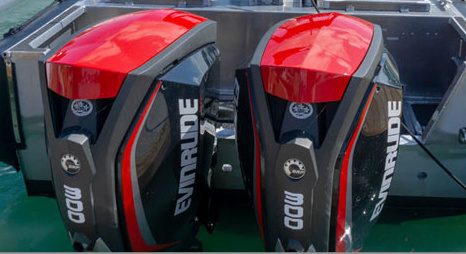 During the Miami Boat Show, we wanted to test the most powerful engine of the series: the Evinrude E-TEC G2 300 HP V6 3.4 L.

To carry out our test, we chose an unusual boat: a Zodiac Milpro SRA 900.

The Zodiac Milpro SRA 200 is a professional boat, specially designed for government forces, such as Coast Guard.

So, inevitably, in addition to being sturdy, safe and reliable, this boat is also very agile and fast when maneuvering. All features that seem to suit to those of a two-stroke engine. 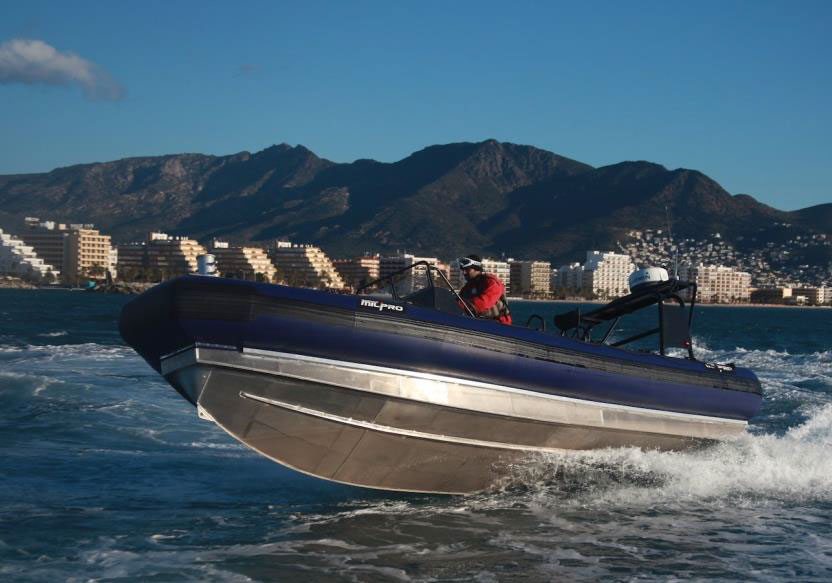 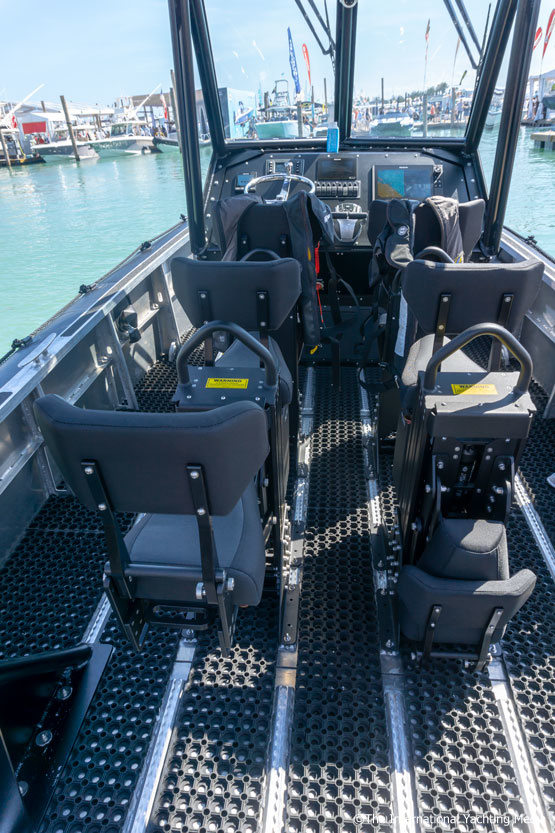 ard who shows me in detail the boat we’ve chosen for our test. I take no long to realize that this is boat is definitively “determined”.

Hull and bottom are entirely made of aluminium. The hull is also reinforced and designed with a special system equipped with two side stabilizers in order to improve manoeuvrability when sailing fast in tight areas. Floats are made of Duratane® and made of independent inner tubes in order not to compromise the whole structure when single holes appear on the floats. 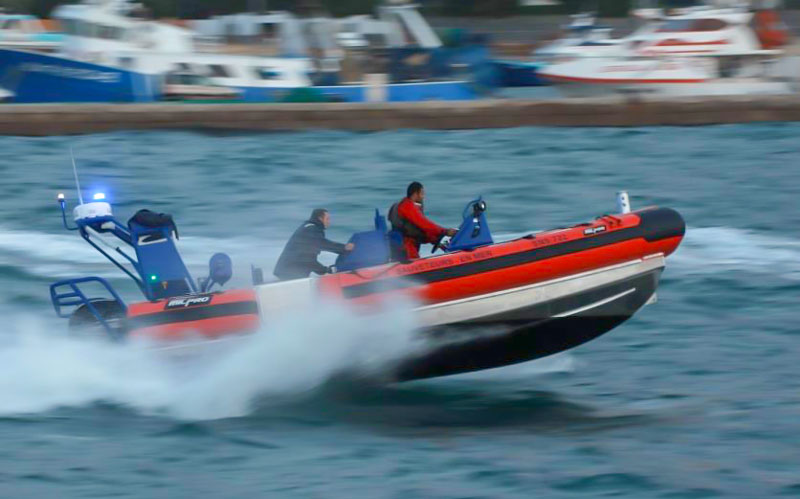 Inflation valves are all equipped with a smart pressure switch that prevents the inner tube from exploding in the event of sudden impact. They open and discharge extra air in the event of a sudden inner pressure increase.

The boat is equipped with two fuel tanks. They are placed in different positions so that fuel can goes from one to another while preserving boat balance. Seats, all equipped with a special damping system with pressure-adjustable piston, are screwed into special rails positioned on the walkway that cover almost the whole length of the hull. The structure of the central steering console, too, is bolted to the rails, which gives the possibility to change the interior layout of the boat at will.

The boat is ready and, as we start the two engines, I immediately notice their extraordinary silence at minimum revs. We cast off and leave the overcrowded dock of the Boat Show. The boat has four passengers on board. 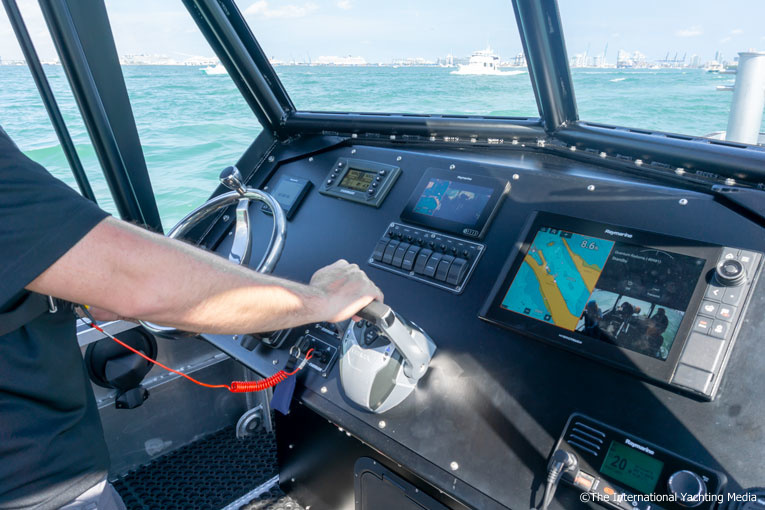 decide to let Jake Albinio at the wheel in order to detect and note down all performance data. As we are on the open sea, we open the cushioned seats and pull throttles down. Engine response is immediate.

As revs increase, the engine noise becomes more audible and sharper, which makes me really excited. The Evinrude are responsive and, within just 9 seconds, we already run at 40 miles per hour. I can detect the best efficiency at 3,500 revs/min when the speed reaches 30 knots and we use 64 liters/h (2.2 l/nm). Fuel consumption levels are excellent, especially if we consider that we are on a very heavy boat (3.2 tons!) .

I perceive an unexpected feeling of comfort; the Zodiac Milrpo SRA 900 goes fast and well-balanced and, also thanks to the movement of the seat piston, I can write down my data without any problems. I become fully aware of the tireless work of cushioned seats only at the end of the test since the videos I take on board are too disturbed. My body, hands and cameras inevitably follow the rise and fall of the piston! 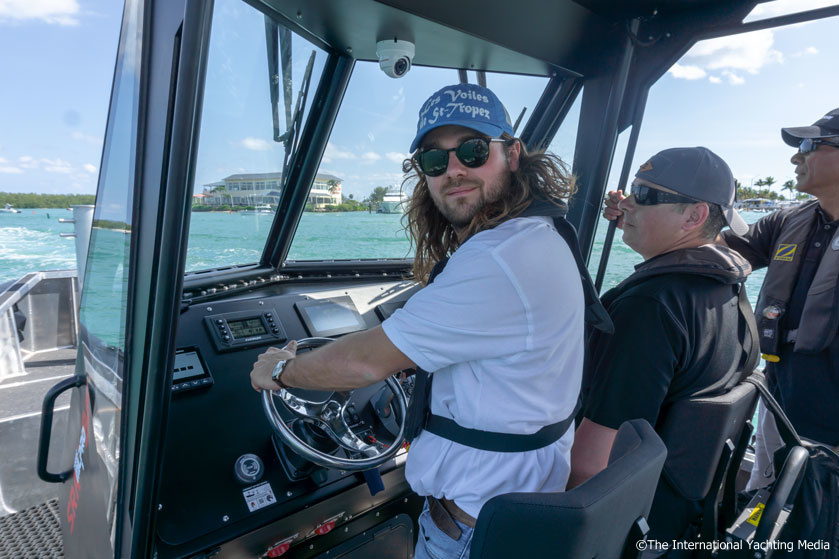 I take the wheel; I’m curious to savour driving sensations that already seem to be particularly promising. At first, I accelerate and slow down progressively, then I repeat the maneuver more vigorously and more sharply. I want to see the real reaction of these powerful two-stroke engines. I realize that they are surprisingly elastic, docile when you decide to sail slower but incredibly powerful when necessary. When asked to support a sudden speed increase, their response is immediate, without downtime. I decelerate and, right after, I pull the gas throttle down again: power is remarkable and immediately perceivable.

During our ritual turns, I notice that the Zodiac Milpro SRA 900 is an excellent boat as are engines. Not much for the speed ( anyway, we reach 47 knots) but for what she can do.

The hull is very agile and, even during the tightest turns, the stern never slides on the water surface. Test conditions are not particularly harsh, the sea is flat and the breeze is light. However, we encounter many waves created by the multitude of boats that pass through the bay continuously. The boat is not affected by that and cuts through the waves without any problems both during maneuvers and when running at high speed.

At the wheel, the feeling is like you can take the Zodiac Milpro SRA 900 to her extreme more and more.

During my maneuvers, I don’t exaggerate since I don’t know the boat very well. Indeed, it’s Jake, who knows the limits of the boat, who shows me how far we can go. 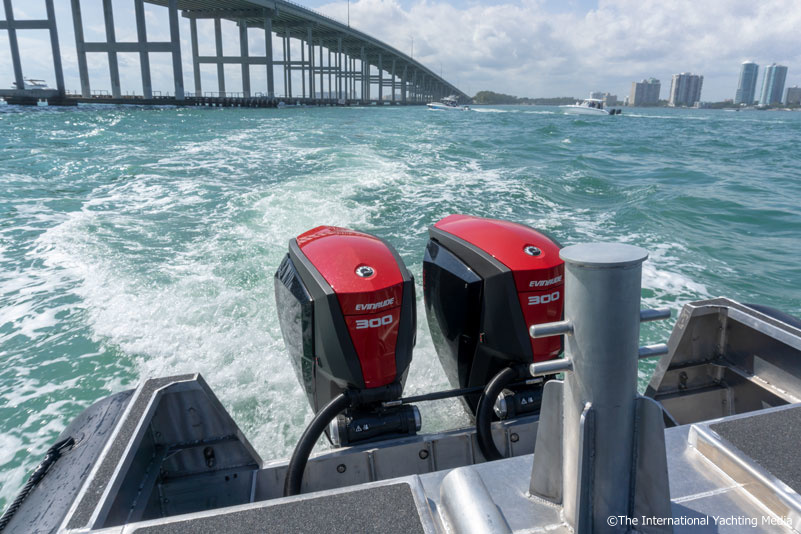 With the throttle all down, I perform very tight turns and I almost don’t believe my eyes when I read the data transmitted on the display. We have entered and gone out of a hard turn at more than 40 miles per hour. At this point, we draw concentric circles with very narrow diameters ( a little greater than the length of the boat itself). Even when the side-slip angle seems to be excessive and the float seems to be about to enter the water, the boat is always under the pilot’s control without never losing speed or adherence.

The Zodiac Milpro SRA 900 is a bloodhound. Unlike Ribs destined to private users, she performs maneuvers within half the space and at almost twice the speed. Moreover, she is very sturdy.

It is important to consider that the maneuvers we have performed have been supported and made possible also thanks to Evinrude engines. The combination of an easy-to-steer boat and powerful modern two-strokes has seemed perfect.

Test Conditions: flat sea, fuel capacity at 60%, 4 passengers on board

An eventful September for Magazzù