Public interest is growing for the Wedgeline Hybrid 77, the first zero environmental impact superyacht designed by the Fabiani Yacht shipyard. At the last Venice Boat Show, many visitors were interested in the models exhibited by the company at its booth: as owner Maurizio Fabiani (in the photo) recounts, “we registered considerable curiosity on the part of owners, which denotes a certain interest in our innovative boats”. 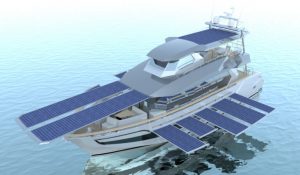 Fabiani Yacht’s are large-sized hybrid boats equipped with solar panels that allow silent, zero-cost, non-polluting cruising. Construction of the first model, the Wedgeline Hybrid 77, began last April and will be completed by the first half of 2023. “Our boats, which were born in the traditional way and have always been built to the highest quality, have evolved to incorporate retractable mechanised solar panel systems,” Mr. Fabiani explains. ” Because of their large surface areas, they are almost like floating photovoltaic parks that, with the right weather conditions, can go out towards the bow or towards the sides of the hull, allowing navigation in absolute silence and without polluting, even in the largest sizes, which in our case reach 100 feet.” Mr. Fabiani also stresses that “with our superyachts it will also be possible to access protected marine areas, which are forbidden to diesels: this is a feature that, also thanks to the support of our patents, no other shipyard is able to offer today”.

The yachts’ hybrid drive system, Fabiani explains, “allows to switch off the diesels and use the electric motor, which is connected directly to the propeller shaft and draws on the battery bank. Obviously the cruising speed is not the same, but on board a Fabiani yacht it is possible to go up to 8 knots at zero cost and in total silence”.

As far as construction 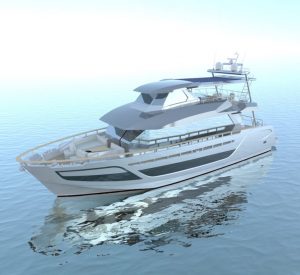 is concerned, Fabiani Yacht also pays special attention to eco-sustainability. In fact, Mr. Fabiani adds: “We abandoned fibreglass a few years ago, because it gives problems in the demolition and disposal phase. Instead, we now build our hulls predominantly in aluminium, a noble material which, once the boat is scrapped, can be easily recycled without any waste, thus reducing environmental impact. This is a special feature of our boats’.

Fabiani Yacht’s boats are built in sections: once completed, the pieces are joined together with the utmost precision. This is painstaking, long-term work, which will take two years to complete the first yacht, but which owners and the planet cannot wait to see at sea.