Franchini Yachts arrives at the Cannes and Genoa boat shows with all the preponderance of a unique yacht, the MIA 63. Unique because it boasts a 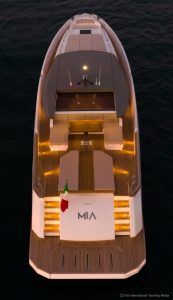 bow that is different from all the others, chracterized by diamond dihedrals that stand out on a taut line that encloses large volumes and harmonious proportions. MIA 63 is unique because she sums up that nautical philosophy of which we still find no trace in the not insignificant competition. The main protagonists of this planing motoryacht are the sailors, in a competitive tandem with the boat’s quest for beauty. It’s no coincidence that Franchini Yachts’ evolution has reached the “four point zero” version as far as life on board is concerned, to which a great deal of attention has been dedicated in order to make it as customisable as possible and satisfying in all respects. Evolution rhymes with “emotion”: it is no coincidence that one of the yard’s great success is the Emozione 55. This 55-foot lobster boat left the public speechless when she was launched in 2003 for her stunning elegance.

Massimo Franchini bears the surname of his father Michele, a master carpenter who founded the shipyard in the years of the economic miracle, producing fishing boats and yachts. Today, owner and architect, Massimo Franchini has been spreading the same craftsmanship he inherited from his father for more than 50 years, but he does so with a more modern and productive transformation.

He personally signs the nautical study and development of his shipyard based in Misano Adriatico in the Rimini area. High quality standards, avant-garde and future together make up the Franchini Yachts paradigm. And now the yard is also looking to the Spanish market, with the activation of an important dealership to spread the brand in Iberian territory.

The MIA 63 will be on display at the Cannes Yachting Festival from September 7th at PAN 212 on land, and at PAN013 at sea. From September 16th, instead, she will be at the Genoa Boat Show, booth YE69 and berth E409.The boat will be on stage at the boat shows in the T-Top Wrapping version: a very special surprise that will reveal her to the public on the water in all her charm summed up in her 19.20 metres of length.

Aldo Drudi, the “speed designer” with 40-year experience, has been involved in the creation of this “special” version.

Aldo Drudi has been bringing his ideas from the world of MotoGP to the world of nautical aesthetics for a long time and now he has come aboard the MIA 63, turning his ideas in colours that are useful to describe speed. “I tried to create a sort of time “time travel” that would graphically summarize the atmosphere of the Sixties on an extremely dynamic object, but with classic proportions and hints” – Mr. Drudi explains – The technology and strength of Massimo Franchini’s lines dialogue with the imagination and joie de vivre that characterized the years of the economic boom which, it should not be forgotten, are also the years of the birth of design and “Made in Italy”. Marine themes, tropical flowers mixed with fresh colours and textures taken directly from images of Renaissance fabrics that I had seen at the Uffizi Gallery in Florence”. It is clear that this “sea and land” encounter enriches Franchini Yachts’ nautical design with an inevitable contamination. Because Misano Adriatico is just a stone’s throw from Porto Verde Marina, but it is also the undisputed capital of motorcycling. And it is here that the yachting industry not infrequently exploits synergies.

MIA 73 at the boat shows

The most beautiful bow, we mentioned above. Yes, because the MIA range features a reverse bow capable of offering absolute seaworthiness. And it is perhaps the only aspect that cannot be ‘customized’ on board the MIA 63. But who would want to change that? It’s a truly iconic feature. As far as customization and owner requirements are concerned, “however, the principle remains unbreakable,” explains Massimo Franchini. And that ‘principle’ speaks of nautical-navigational elements with an active safety function that should rightly not accept extreme demands. Apart from that, which should not be resisted so as not to compromise safety on board, each owner will have “his Franchini” as he wishes. 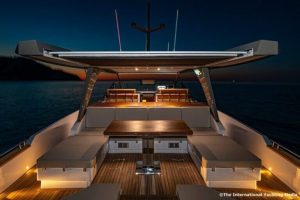 and deck are made in vacuum using hypodermic resin. The patented process, which also uses nanotechnology, produces a structure that is “rigid and light, fireprooof, and free of vibrations and sound propagation”. The waterlines of the hull are designed by Roberto Prevel, a renowned naval architect. MIA 63 is offered in 4 versions: Open, T-top, Hard-top e Sportfly. Other features of the MIA 63 include a Portuguese deck that challenges superyachts in terms of width. The interior is fitted out with an option of two or four cabins, including the choice of crew quarters. The IPS propulsion completes the package. We recommend seeing her in the evening when the set of LED lights illuminates the water around the yacht in a wonderful turquoise blue multidimensional chiaroscuro of so many dihedrals.

To book your boat visit, please write to: info@franchiniyachts.com 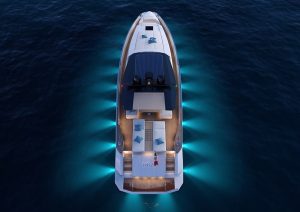 Scanner Marine gets Cannes with the ENVY 860 and 1200 Ribs