MAR.CO Marine Costruzioni, the well-known Italian shipyard based in Muggiò, will be at the Cannes and Genoa boat shows with two high-class Maxi Ribs. At the moorings of the two most important boat shows of the moment we will see on display the R-EVOLUTION X36, fitted with twin Mercury 600 engines, and the E-MOTION 36, an ultra attractive and absolutely liveable Maxi-Rib. The distinctive feature of this Brianza-based shipyard is undoubtedly its exclusive character and the quality expressed in its dream inflatable boats.

MAR.CO was founded in the seventies and it is a strong-willed story that grows and improves from the very first moments of its foundation. At that time, Mario Zamuner, already an experienced professional in the nautical segment of inflatable boats, was working in Seregno. He immediately realized what the marine industry in his sector was missing. There was a need for more craftsmanship, more attention to customization and customer needs. More valuable details. This is how the entrepreneurial will of Mario Zamuner, and later of his two brothers Mauro and Marco, gave rise to MAR.CO Marine Costruzioni: with an imprinting endowed with innovative ideas that challenged the standardised mass of industrial boats for daily use. And, to mention just one, MAR.CO was the first shipyard to introduce the first retractable cabin in history.

The history of the shipyard continues with the arrival of the 80s and 90s, when MAR.CO became ultra famous with its typical “orange-coloured” inflatable boats. An indistinguishable sign that undoubtedly reminds us how we all knew them. Before the great design revolution finally arrived in the nautical world, it came to offer us this present of MAR.CO signed boats. Constant technological and stylistic progress.

Mar.Co: the E-MOTION 36 impresses everyone 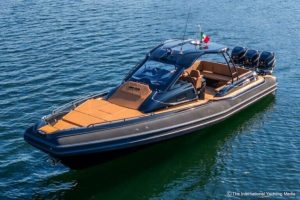 The MAR.CO E-MOTION 36 is a boat that conjures up superlative adjectives in an irresistible magnetism. Because it is true. She brings to the sea the beauty that we are used to appreciating elsewhere: a villa, a supercar, but we are on a Maxi-Rib that denotes all the charm of Made in Italy.

Three outboards decorate the spacious aft beach area on its teak-finished deck. The roaring harmony starts the dances that stage a nautical choreography with grit and sporty shapes refined by the choice of sensational details. Below deck is a unique world of owner’s accommodation: hazelnut-coloured cushions with the boat’s logo, a king-size double bed in the bow with everything you need, including a safe and, of course, a head with separate shower. Details makes a difference, such as the classy tapered handles, for example, and the shiny hardware on deck that is always perfectly flush so as not to disturb the sailor’s step.

The cockpit is framed at the top by its T-top. There is plenty of room for electronic instrumentation and two ultra-sporty seats set the E-MOTION 36 apart in terms of beauty and comfort. It’s what those looking for fast, lively boats expect.

Tested by our journalists 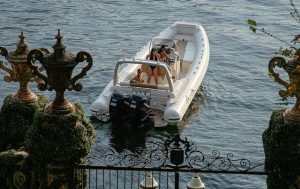 (click here for the article), this 10.70 meter boat immediately revealed its deep, infusion hull, which guarantees safety in all types of sea. The adrenalin needle marks 56.8 knots of top speed in less than 18 seconds. The E-MOTION 36, powered by two Mercury 600HP engines, can be seen live at the Cannes Yachting Festival, on the Pantiero pier (PAN 023). In Italy, at the Genoa Boat Show, the reserved booth is BA265. FurtherMAmore, in Genoa the yard will also be exhibiting the E-MOTION 32 and the Twentysix equipped with two Mercury 300HP engines. The latter is a highly functional Rib equipped with a roll-bar and, above all, the perfect essentiality for fast sea outings, plus a toilet room in the cockpit.

In Genova ( BA 176 ) and Cannes ( PAN023 ) the shipyard will also be exhibiting the R-EVOLUTION X36, fitted with two Mercury 600HP engines. Deck spaces are ample, with a maximum lenght of over 10 meters and a beautiful teak-finished platform in the console with the boat’s logo superimposed. R-EVOLUTION X36 is a MAR.CO flagship that attracts a lot of attention and is waiting to be tested at sea. 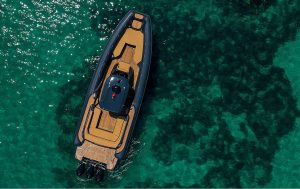 Thrusters and winches: Italwinch dominates the scene at the boat shows

SAIM Group at Cannes, Monaco and Genoa boat shows: here is the range