The Prince 43 CC is truly a noble, ultra-sporty RIB, a great innovation from Nuova Jolly Marine. We saw her live at the Genoa Boat Show.

Nuova Jolly Marine played a major role at the Genoa Boat Show and this was to be expected. There were a lot of interested visitors in front of the pavilion to see the absolute novelty of the Busserio-based shipyard, the Prince 43 CC.

Fitted with two Mercury Verado 600 V12 engines installed on the bracket, this Maxi-Rib is perhaps the most sporty and powerful RIB that the Genoa Boat Show public has ever seen. And there are good reasons for this. 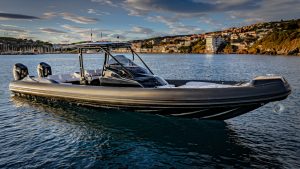 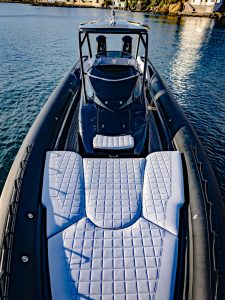 the cabin, which has a separate head, portholes and a bow entrance: “It’s a refuge that lends itself to comfort”.

The gas piston hatch lifts up, opening the central console like a ‘chest’ in the bow. And when it’s closed, it turns into a seat facing the sea.

Unusual, if you want, because the bow cabin was conceived with a criterion that is perhaps more related to design than to nautical aspects, but it is surprising for its rationality and adherence to the sporty concept of the Prince 43 CC.

It is a project that allows for more space in the side-decks and an extended foredeck. The aesthetic aspect focuses on the helm station, without undermining the boat’s grit. This way, in fact, the central console becomes a truly sober volume, well proportioned with the rest of the Prince 43 CC line. 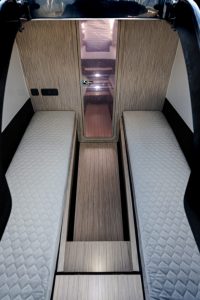 Seen live, the cabin is really convincing, maybe because you can’t see it but it’s there? Climbing on board the Prince 43 CC, the first impression is of space on deck but not emptiness. There are at least three lockers, a 50-meter chain tunnel and two aft benches (with internal pump housing) to starboard and port.

The design is decidedly inspired by luxury automotive; you can anticipate the cruising speed, but you wouldn’t think you could sleep on board for at least one night at anchor.

Or who knows: crossing the Atlantic? That’s not out of the question. Especially if we open a parenthesis by telling you that the Aretusa Explorer, a Maxi-Rib produced by Nuova Jolly Marine, will set sail in November from Palermo for an ocean crossing to Los Angeles, passing through the Panama Canal. At the helm is Captain Davì, and it’s not the first time he’s undertaken this kind of high-risk adventure.

Prince 43 CC among the elected to the Verado 600 kingdom 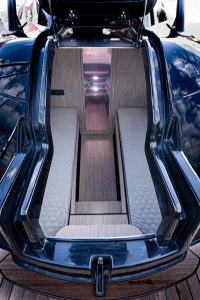 Europe have been given the opportunity to fit their boats with the new Mercury Verado engines. Spectacular to look at and with unprecedented performance and range, these are the most powerful outboard engines in the world, and the Prince 43 CC really is the perfect “coach” in our opinion.

Full-black painted tubulars and jelcoat, with teak on the floor and lots of carbon on the bridge: the Prince 43 CC dominates the scene just as we expected. The Genoa unit is the first Nuova Jolly Marine model on public display. Add to this the fact that it was prepared in just 15 days, during which the team worked hardy to get it into the sea straight away.

Nuova Jolly Marine knows how to do things on a grand scale and it doesn’t disappoint with the Prince 43 CC either. The project is the result of over half a century of business history, with which the boatyard has contributed to the evolution of the “inflatable”, transforming it into what we know today. How? With meticulous craftsmanship, attention to detail and rigorous sea trials.

The word to Teo Aiello 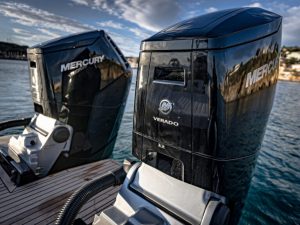 We ask Teo Aiello of Nuova Jolly Marine what he expects from the Verado 600 V12, and he answers without hesitation: “Great performance and low consumption, as well as the structural comfort provided by the fact that this type of engine doesn’t move. So we’ve managed to optimize the spaces on the Prince 43 CC’s stern platform by fixing the engines to an aluminium bracket”.

By the way, a hydraulic gangway rises from the aft platform and rests on the quayside, to the delight of all those who don’t like jumping or hopping from the quayside. The stern sofa (almost full beam) has a reclining backrest that can be transformed into a sundeck and can also be raised to access the plant room.

We were talking about spaces. Yes, there’s plenty of space on a boat that’s obviously not a yacht but has much lower maintenance and mooring costs. For example, the two tables in the bow and stern are electric, and are completely concealed on the floor, so you can create the space you need based on the number of people on board. Here too the concept of “free space” returns, or transformable, for example into a sundeck in the case of the table on the foredeck. 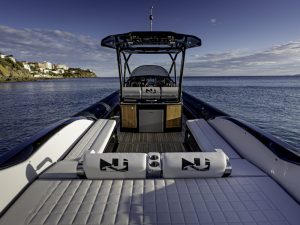 We look at the roof: nautical craftsmanship meets experienced coachbuilding: “The roof is painted like a bodywork because jelcoat tends to fade or dull,” explains Teo Aiello, who is anything but superficial when it comes to choosing colours and paint durability: “Since it’s black, we had to repaint it, and we do ‘bodywork’ repaints with two coats of primer and two coats of clear coat, otherwise the boat would be dull after two years”. 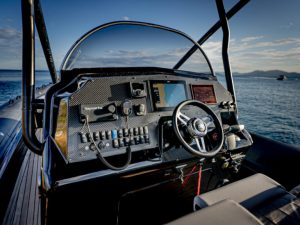 two carbon periscope stands extend from the roof, to which the awning is attached to create a very interesting area of shade at the stern. The bulwark is in fibreglass and continues to the bow in the same mould.At the stern, the padded gunwales raise to reveal two lockers to the left and right of the boat, so the passengers can enjoy navigation comfortably face to face, each with his own large portion of the panorama.

The central console is decidedly prestigious, with plenty of carbon between the instruments. There’s plenty of room for all the electronic equipment chosen by the owner. Protection is guaranteed not only by the roof but also by the windscreen framed in a truly sporty stainless steel frame.

The three seats are independent with a raised platform to improve the view: they can be folded, are large, comfortable and non-slip, and are also equipped with armrests and well decorated by their modern mirrored stainless steel frame. Behind the armchairs you’ll find everything you need for a shrimp cocktail: an electric (or gas) cooker, a 100-liter refrigerator and two teak cabinets as standard.

We asked Teo Aiello about the waiting time for the Prince 43 CC: “Deliveries on this boat are due in May at the moment. Generally speaking, with a normal production cycle, it takes around six to eight weeks to produce it. This year, thanks to the market, which has given confidence to everyone, not just us, we have full production until the end of June”. 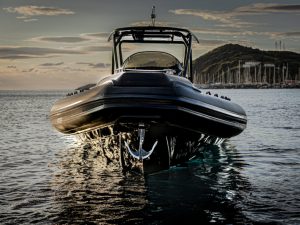