On Test. Quick MC2 X: the Copernican revolution of stabilizers

Quick MC2 X stabilizers, at sea with no roll

Innovation in yachting industry is something strange. 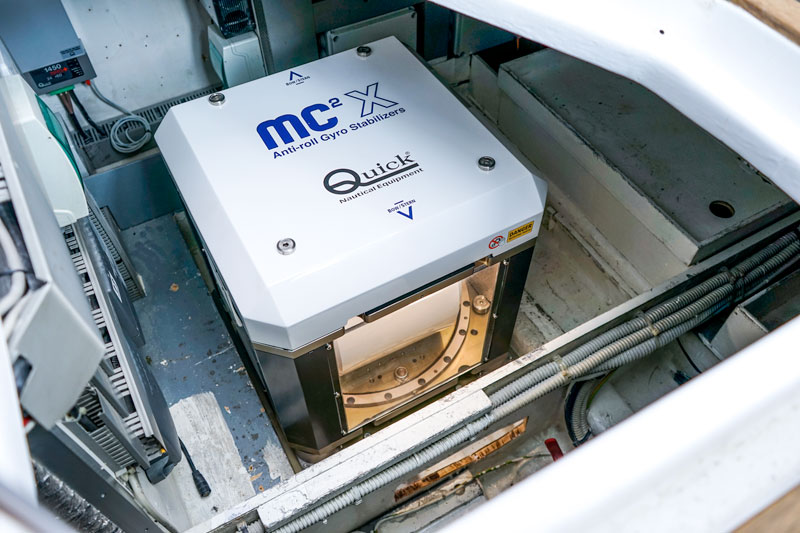 Far from being a slow continuous process like in other sectors, it is made of occasional leaps or, if you prefer, occasional revolutions. Like the Copernican one, for example, that, in addition to describe an astronomical system in which everything revolves around the Sun( and not around the Earth), is currently used as a synonym for the overturning of a conceptual system universally accepted before.

Equally odd is the combination that finds the synonym for revolution in the noun “rotation”, according to a thought that proves to be particularly appropriate when it comes to stabilizers, the object of our test.

Maybe, these concepts have teemed in the mind of the founders of Quick, the Italian leader in the field of nautical equipment, when, just over a year ago, they took over MC2 with the intention of revolutionizing the global market of stabilizers, reversing their basic conceptual principles.

Totally re-engineered within Quick’s  Ravenna-based 20,000-square-meter production facilities, the new MC2 X stabilizers are based on mechanical principles that are opposite to those currently spread. 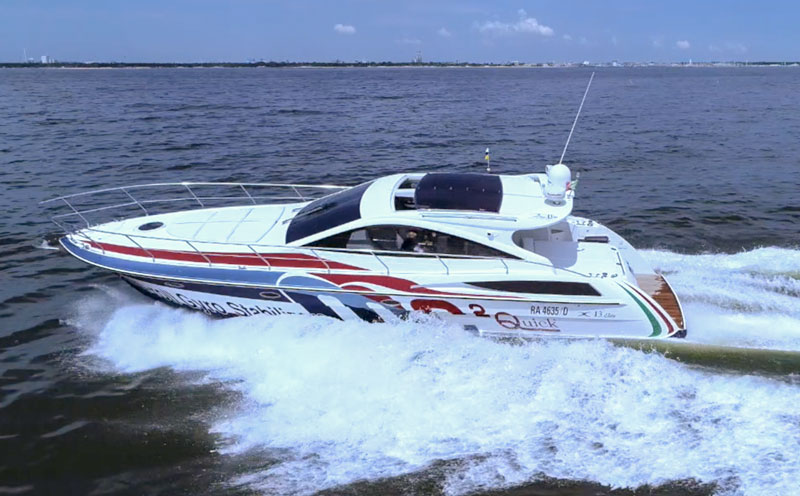 The first great revolution is that the mass of MC2 X stabilizers revolves around a horizontal axis instead of a vertical one and this is a remarkable difference. Thanks to horizontal rotation, indeed, the weight of the mass is distributed on two bearings instead of a single one like in vertical models and this results into two considerable advantages:

1) Mechanical stress is significantly reduced; consequently, mass can be larger and revolutions can be reduced for the benefit of ignition times;

2) Heat output, too, is drastically reduced; this way, water cooling and vacuum operation are no longer necessary.

All these advantages result into a product that, not being water-cooled and not having need for vacuum operation, is significantly more user-friendly and more efficient. In short, the stabilizer just needs to be anchored and powered to be ready to use. This makes it perfect also for being integrated in the already existing boat equipment.

Let’s come to our test that is more interesting than anything else. 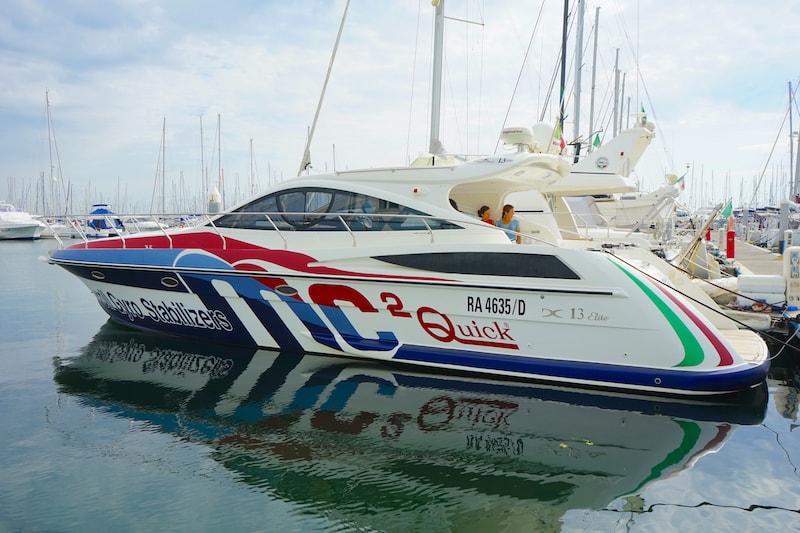 We got the port of Marinara on a nice sunny morning. Quick’s staff was waiting for us. As we had requested, the boat was completely off in order to better simulate and verify the functioning of the stabilizer.

We climbed on board the DC 13, the boat the company generally uses to test its equipment; on the other side of the jetty, a twin yacht was docked, equipped with no stabilizer. Both boats weighted about 16 tons in running order. The presence of two identical boats gave us the opportunity to carry out a highly reliable test, certainly more incisive than a simple ” on/off” simulation that would have showed only the disconnection of the mass.

I asked Quick’s team to open the hatch leading to the engine room and, as soon as I entered in, I found the system. On our test boat, the front side had been replaced by a transparent plexiglass cover which allowed us to see how the stabilizer was made inside. In short, the round mass (that, in our case, was that of a 19k weighting 553 kg) was hanging from a horizontal axis supported by two sturdy abutments that, in their turn, were combined with a “pivoting plate” situated at the base of the tool.

The horizontal motion of 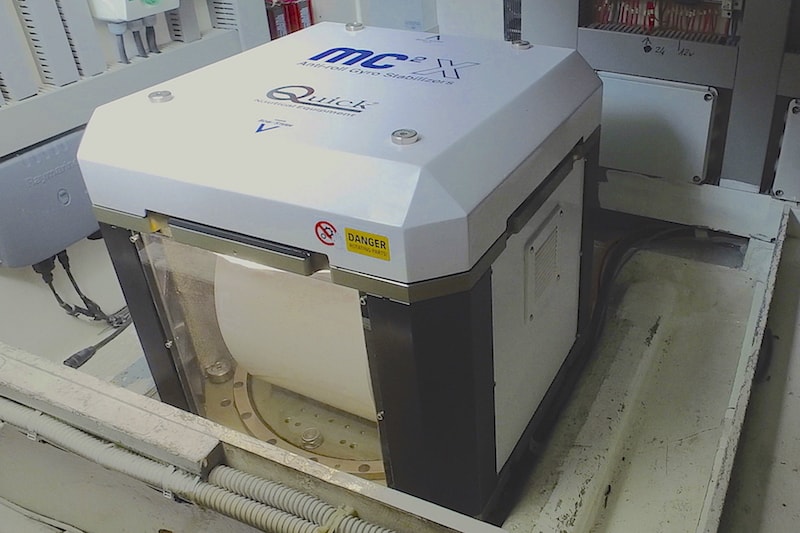 the plate guided the vertical rotation of the mass, producing a righting movement that opposed  the boat’s roll.

The first thing I noticed were the compact size of the stabilizer ( in practice, a 60×60 cm cube) and the simplicity of installation. The mechanism was simply anchored to the boat structure while a handful of cables transmitted power and managed the flow of information with the remote control.

There was nothing else in the engine room. The elimination of vacuum operation and water-cooling, indeed, has resulted in the removal of many components that might make installation more complex while compromising the overall durability of the system. 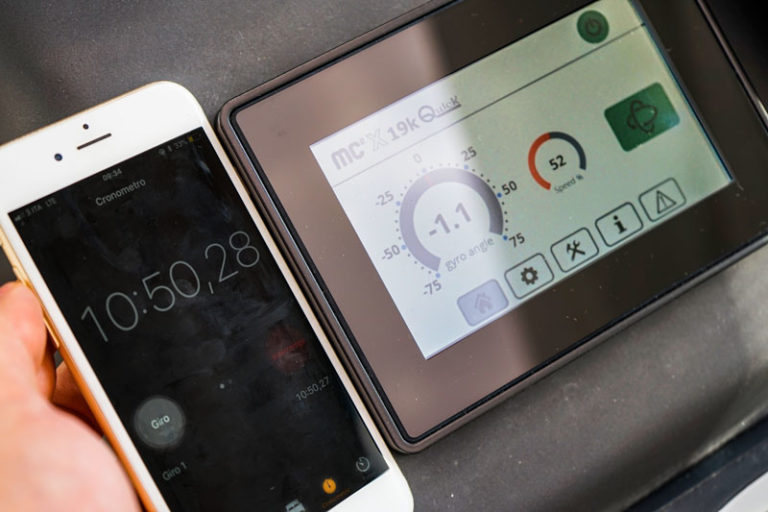 In the pilot station, I turned on the display, set chronometers and switched the stabilizer on. Although only one meter separated us from the engine room, no noise was perceivable. I opened the hatch and I saw the mass that, quickly enough, was starting to rotate in total silence. At that point, we started the engines of the DC13 and left the port.

Ten minutes after the ignition, while we were still sailing between jetties, the display informed us that the stabilizer had already reached 50% of its maximum rotation speed: not bad, I thought. We could trigger the functioning and enjoy half of the effect. 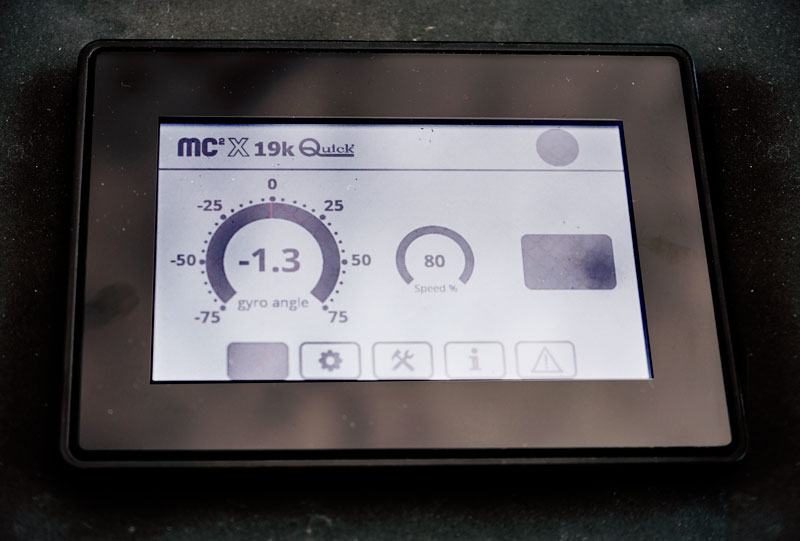 hile we were waiting for the second DC13 to join us in the long entrance of the port of Marinara, undertow finally came. Out of the port, waves were long – the ideal condition to test the functioning of the stabilizer – but, even within the two inner breakwaters of the port, undertow and the waves raised by the other boats shooked our boat.

Then, when the chronometer marked 29 minutes, 12 seconds and 50 hundredths, the indicator got 100% and we finally turned our Quick MC2 X on.

When I pushed the “on” button, everything stopped, even the horizon and waves stopped moving.

They started to crash against the topsides of our boat, as if we had become a jetty and no more a boat. The efficiency of the system really impressed us. 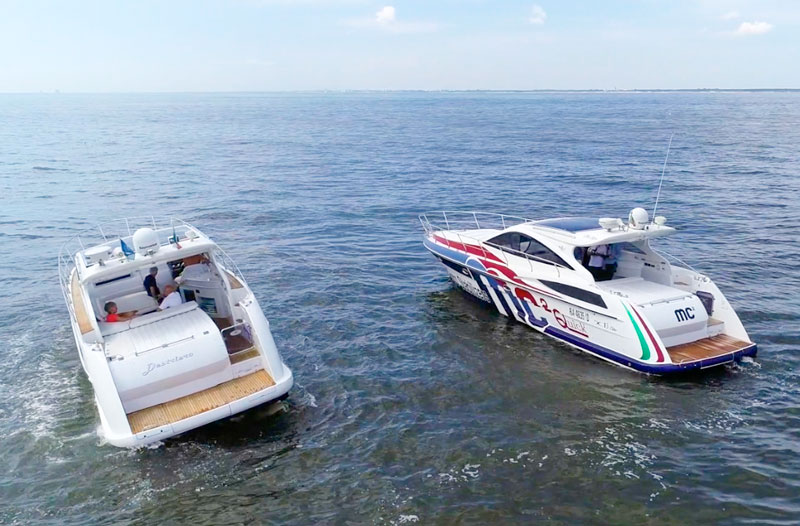 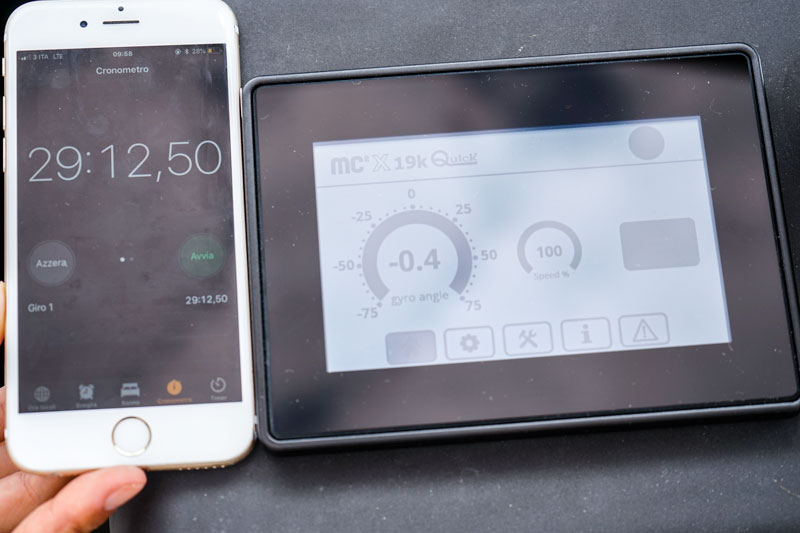 n the twin boat finally arrived, we pushed our throttles down and went out of the port, where we were welcomed by a 40/50 cm wave.

In other words, the typical conditions that knock glasses over or make passengers turn pale.

With the stabilizer on, we tested a series of turns at different speeds. Unlike other products we had tested before, the Quick MC2 X didn’t impede turns, navigation was always stable and safe and we even managed to draw a “8” figure in the water, a really uncommon thing on a boat equipped with a stabilizer.

Slowing down, we tried to sail abeam: at displacement speed, the stabilizer-equipped DC 13 was stable while her twin sister was suffering a lot. The difference was visible to the naked eye. 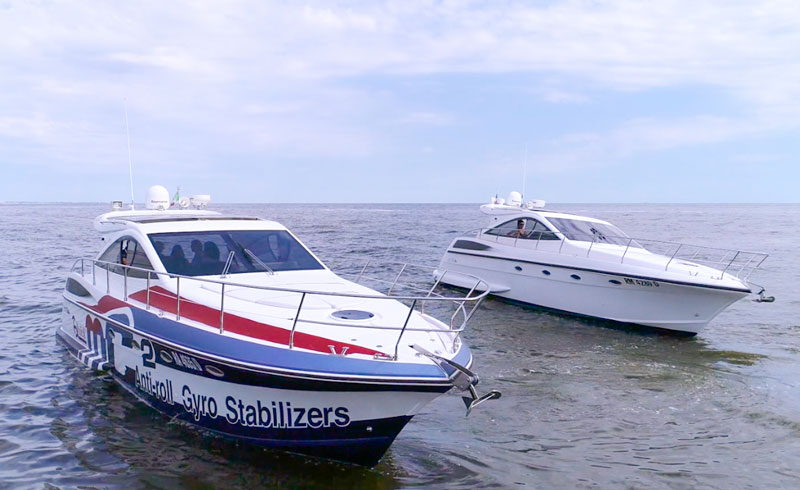 We stopped and we let the two boats come alongside, near to each other, while the wind placed them on the beam. With the exception of a slight inevitable pitching, our boat was practically immobile while the other rolled a lot, with roll angles of over 35 degrees.

I asked the crew to disable the stabilizer and, in one second, everything changed and got unstable. Our camera equipment was lying on the sofas and the table; the stability we had enjoyed before had made us forget it but, now, we rushed to save and protect it from falls. The difference was huge.

We turned the stabilizer on and safety was immediately restored on board. Yes, because this accessory significantly improves safety on board, preventing things and passengers from falling. A very important aspect when sailing. 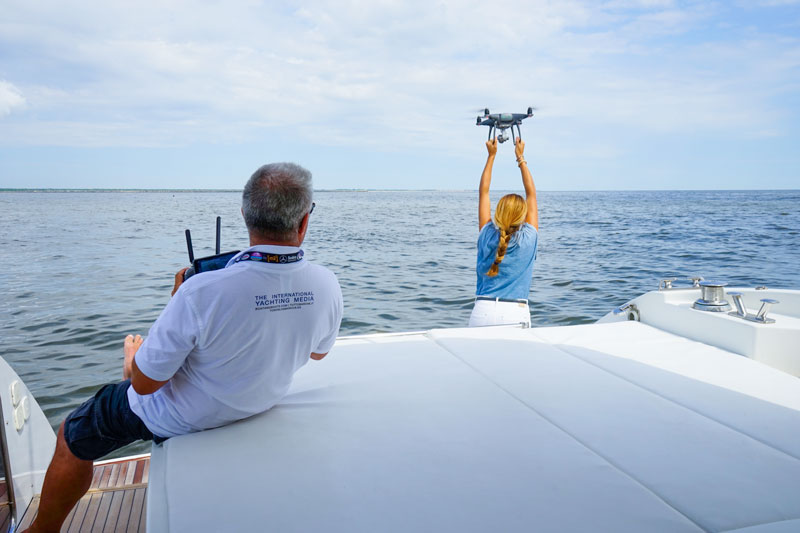 In order to choose the best stabilizer for your boat, you should consider some important aspects. In addition to weight, indeed, boat height and width are equally important as well as vertical weight distribution. Hull and hull stability, too, are important factors but, by chance, the shipyard will deal with this calculations.

Finally, in order to confirm what you have read until now, we launched our drone with our boat static and the stabilizer on. The following are the pictures reporting our test day.

Quick engineers have actually carried out a new Copernican revolution. The new MC2 X is effective, easy-to-install and maintenance-free.

When compared with its competitors, it is a generation ahead, both in terms of performances and turning on/off speed. This is a not insignificant detail if we consider that the stabilizer, not being water-cooled, is generally turned off at the dock and allows you to leave the port with no problems.

If you want to monitor the stabilization capacity of your system, maybe while you’re laying in the sun, you can download the App that, compatible with Apple and Android smartphones and tablets, gives you full data control. 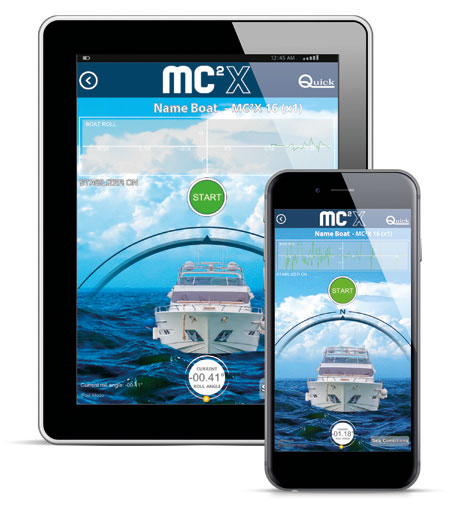 As for the old models,made before Quick’s takeover, we have interviewed Michele Marzucco, the owner of the Italian company.

“Quick is a multinational corporation that sells nautical equipment all around the world, thanks to a wide network of dealers. Moreover, it provides customers with complete assistance, including stabilizers of the previous generation”.

Tecnohull Omega 45. From Greece with the strength of 1600 horsepower