Comparative test in world premiere for Raymarine Docksense: that’s how it works with Mercury and Volvo joysticks

After having attended the presentation of the system at Boot Dusseldorf, we couldn’t fail to see whether the innovative and theoretical (at that time, at least) characteristics of the system really corresponded to the real opportunity to facilitate what is the most stressful of all maneuvers: docking.

We therefore didn’t miss the opportunity to put the Raymarine Docksense system through the mill and, during the Miami International Boat Show, we tested it in combination with the world’s most popular joystick systems: the Mercury Joystick Piloting System and the Volvo Penta Electronic Vessel Control.

What we can tell you straightforwardly is that the Raymarine virtual fender, combined with both systems, is really efficient and, even if you tried to crash against a dock intentionally, it would never allow it. But let’s proceed step by step and let’s see what happened.

I climb on board the Boston Whaler 330 Outrage, an open boat with light displacement (4 tons), and I immediately begin a tour of inspection in order to see the arrangement of the DockSense system integrated with the Mercury Joystick Piloting System. 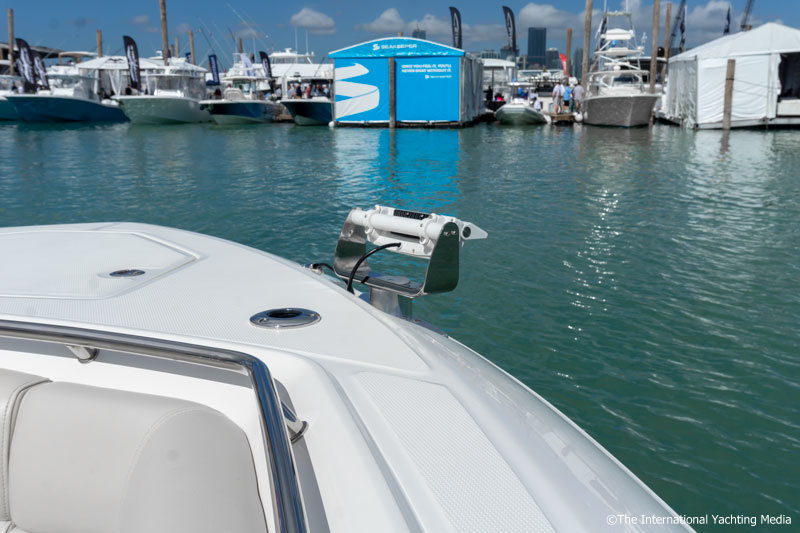 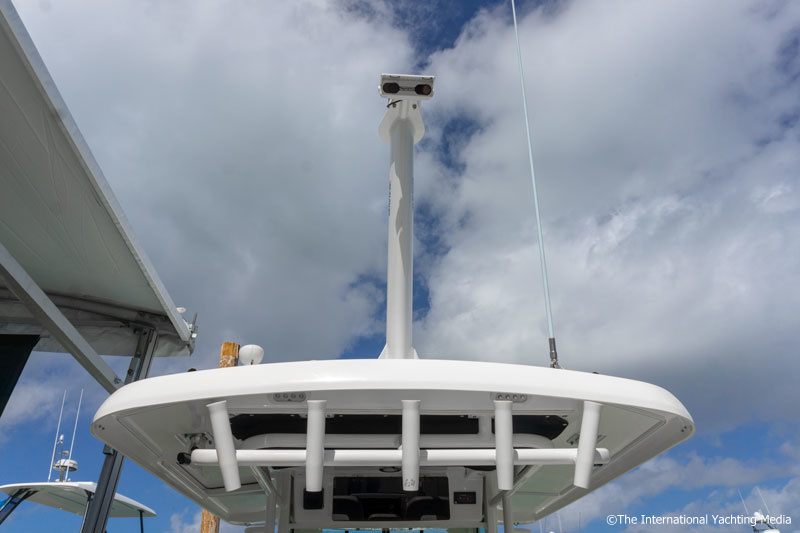 The boat is equipped with 5 Flir cameras, specially designed to be the “eyes” of the system. They are positioned one on each side of the boat with an additional one installed forward in order to guarantee a 360-degree view. Of course, all the equipment of the boat is marked Raymarine and the next-generation Axiom displays allow full connection with the Lighthouse software and therefore with the DockSense system that is an extension of it. 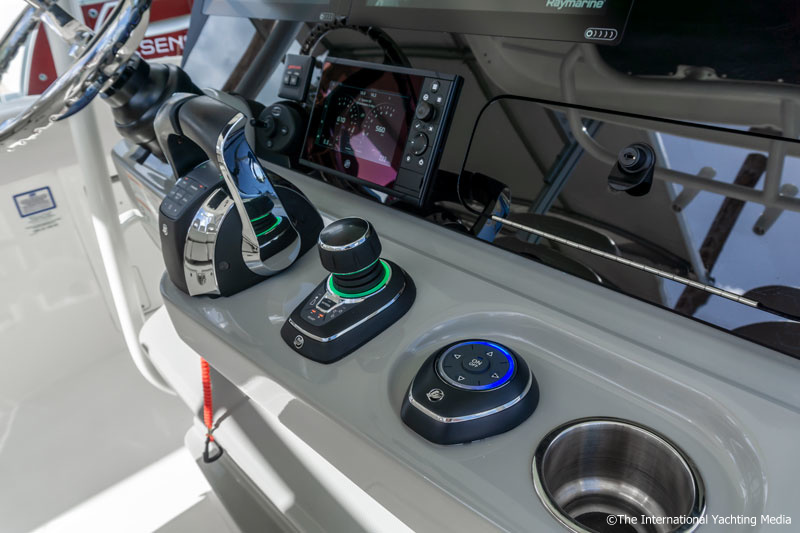 Joystick Piloting System fully integrates with the network thanks to DockSense that serves as a real executive arm, or rather, as a system actuator. Moreover, a control system with four buttons is positioned on the right of the joystick. The arrows stamped on each button indicate a side of the boat.

Raymarine technicians explain to me that, by pressing the buttons, a light comes on and, in a very intuitive way, the virtual fender activates. At this point, I start engines, activate the joystick and cast off.

The first test I want to carry out is a simple reverse maneuver with the boat already aligned for docking. The starboard side is free while the jetty is on the port side and aft. 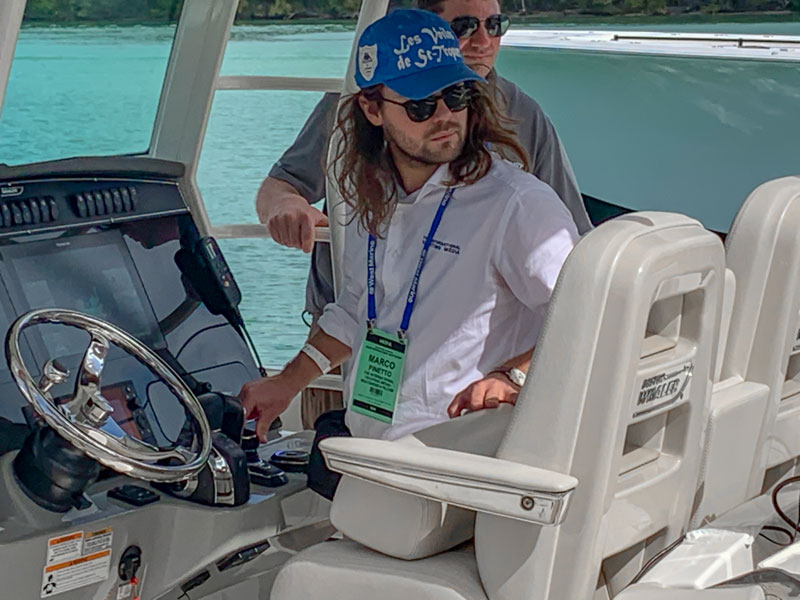 I push the two buttons of the control panel at the sides “in danger” and I activate the virtual fender. I push the joystick lever back and the Boston Whaler slips into the berth. Once in, I keep the pressure on the lever, aiming at the jetty on my stern. My command is ignored and DockSense takes control.

The two Verado 300 start to maneuver, the boat slows down, inertial speed decreases and the distance from the danger is kept constant.

I even try to steer the boat towards the jetty on the left but, once again, the virtual fender makes that impossible. The safety distance I had previously set up was equal to three feet and, in fact, the Boston Whaler fully respects that measure.

Now, I want to see what happens if I leave the boat without my direct control within the U represented by the three arms of the jetty that surround me. So, I take my hands off the controls and, surprisingly, the Boston stands still right where I left her while the systems maneuvers to hold position. 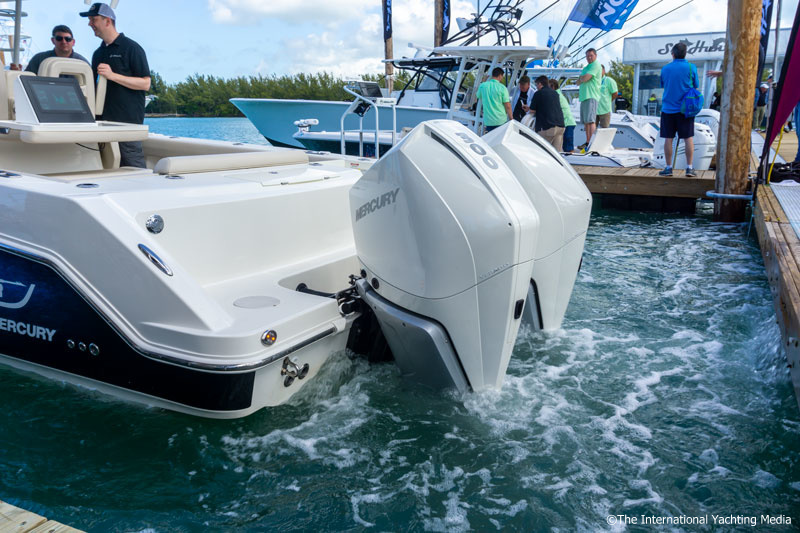 so I try to make things harder. I exit the berth again but, this time, I give the boat a wrong alignment a bit like in a crosswind situation or if I had performed a wrong maneuver. I activate the virtual fender on all the four sides of the boat and try to reveal the worst of myself. I aim, with the right corner of the stern, at the mooring angle on the same side.

But, once again, the system activates and my command is ignored. I insist, turn the bow to the right, move the boat slightly to the left and try to crash against the dock with a reverse movement.

The port topside keeps distance and, with this maneuver, I discover another advantage of DockSense. 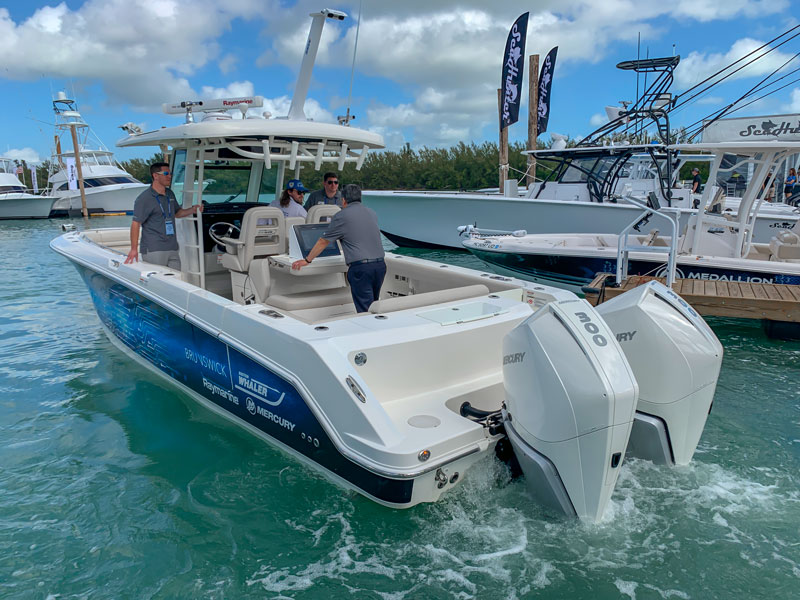 Indeed, I have entered the berth while the boat has acted exactly like when a fender is used as a pivot on an obstacle.

The difference is that, in this case, our fender was virtual and ran along the whole deadwork of the boat.

After my test, I come alongside the dock and turn off the fender on the left side in order to go ashore without any problems.

It is important to be careful in this case because, once off, the system suddenly stops controlling the side and, if the stream or the wind are pushing right in that direction, your boat might risk crashing into the dock.

Once I have finished my test on the smaller 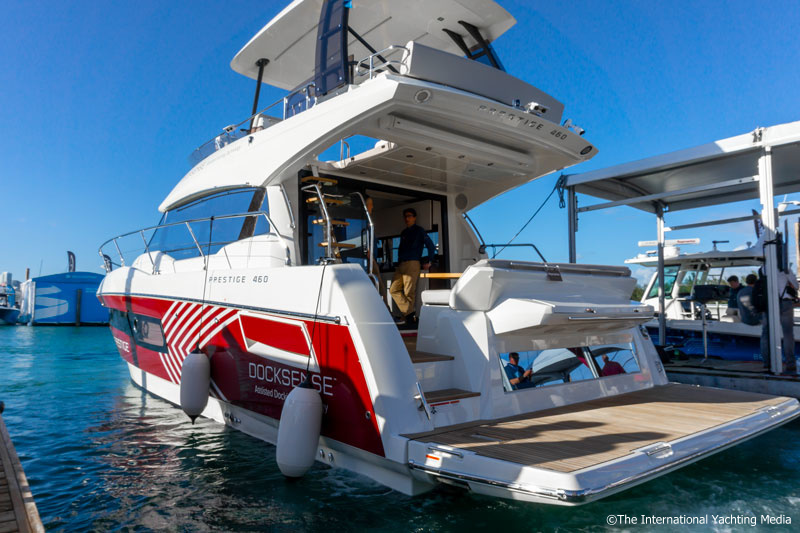 boat, I have a basis for comparison and I can test the Raymarine DockSense on the Prestige 460.

The boat is equipped with a different joystick system, she is bigger, heavier and, of course, fitted with IPS inboard/outboard engines and a bow thruster.

As I climb on board, I realize that things are slightly different. Here, indeed, controls are inside the boat. Consequently, I won’t have the same perception of obstacles than before.

No harm done, it’s an excellent opportunity to really use “DockSense’s eyes”.

I activate the pictures produced by the cameras on Axiom displays and I look a little more closely at the screen that, like a radar view, translates obstacles into a single 360-degree image. This way, I can benefit from an improved technological view. To be precise, these screens were available on the Boston, too, but I never needed them there.

We start engines and exit. Here, I don’t have a push-button control panel to activate and deactivate the virtual fender on each side. I can do that directly from the central system. 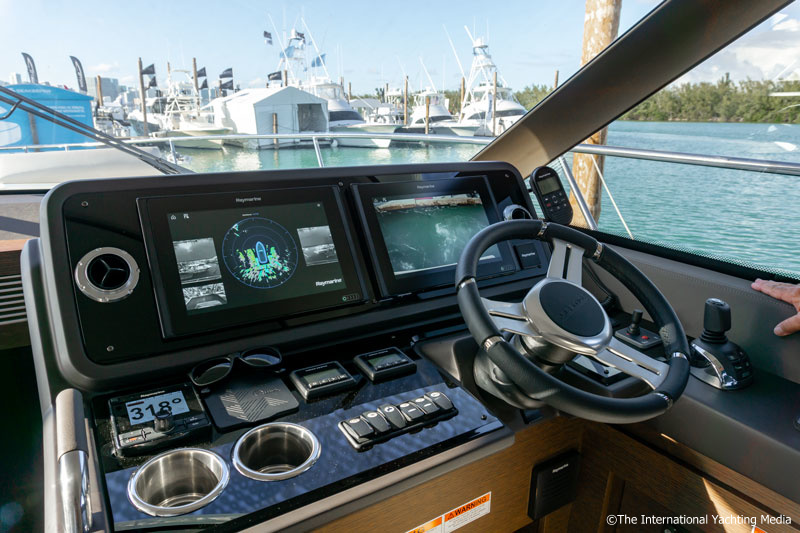 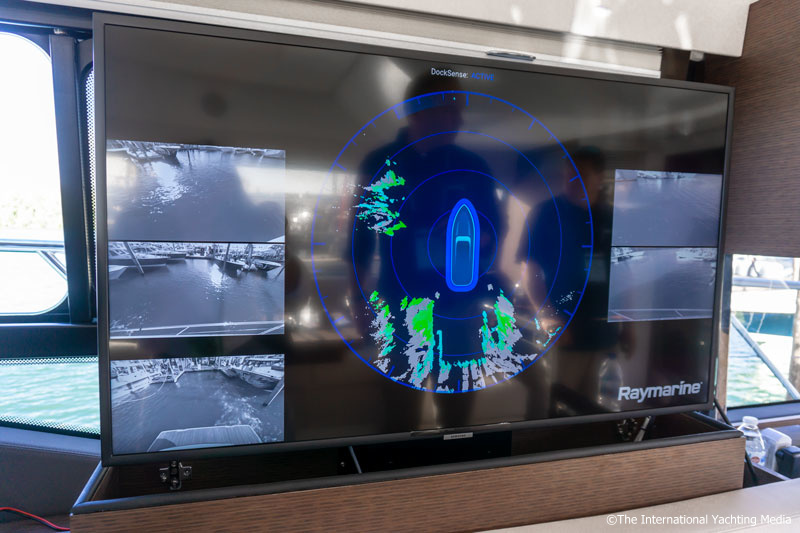 I take the Volvo Penta joysticks and start to perform my maneuvers with the help of the cameras. On this boat, too, DockSense works very well. It keeps distance from obstacles and enables me to enter the berth easily. 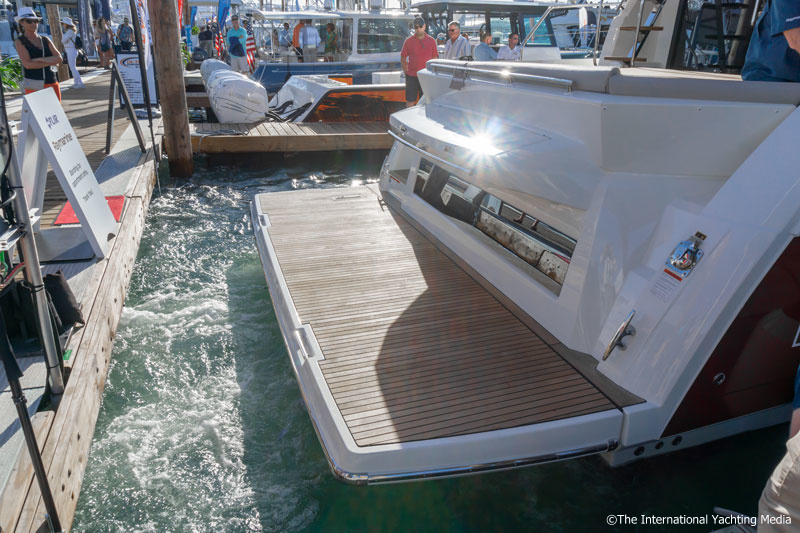 I stop the boat with the starboard side in close proximity to an obstacle, I leave the joystick and the boat, not surprisingly, stands still at that point, maintaining safety distance from obstacles.

DockSense and the Joystick system interact with GPS and calculate/fight stream and gusts (crosswind, in this case).

However, I feel something different during this test, it’s like my control on the joystick is slightly “muffled”, or rather, “filtered” and therefore more fluid, probably as a consequence of the greater weight of the boat.

It’s like the DockSense starts to calculate and intervene on the maneuver, in advance and in a less invasive way, perhaps not to be forced to deal with the greater inertia of the boat.

In fact, the inertial push on a boat of large size is more difficult to oppose, the system anticipates it and, therefore, works perfectly.

My reasoning is strongly confirmed even when we get close to the quay to dock. Raymarine technicians explain that, even when the virtual fender is deactivated on the ashore side, DockSense remains on alert in order to prevent the boat from crashing against the obstacle. The result is a highly safe, definitively “active” system.

Excellent performance for a cutting-edge system that represents the definitive solution to facilitate the docking maneuver, inexhaustible source of stress and damage for one’s own boat and the boats of others. A real leap forward that instantaneously minimizes the experience curve needed (and not always sufficient) to dock under difficult conditions, like crosswind or stream.

Sure, you have to get used to a silent controller that, when necessary, takes over but, after all, in the very long list of pleasures that recreational boating offers, the docking maneuver doesn’t appear. Consequently, also considering that the purchase cost of the Raymarine DockSense is significantly lower than the potential damage we may otherwise face if we don’t install the system, the choice to equipped with it or not is incredibly easy.