They come from Udine, Pordenone, Padua, Milan and many other cities of northern Italy. We’re talking about the members of the most prestigious yacht club of the Adriatic: the second oldest one among all the yacht clubs existing throughout Italy today. The first is Yachting Club Italiano in Genoa.

Admission to Yacht Club Adriaco of Trieste follows a particular procedure: first of all, two ordinary members have to submit an application and, only after the management has accepted it, the favourable secret vote of 75% of senior members (those with at least 5 years of membership) is required; then, if everything goes smoothly, the name of the would-be member will be exposed on the notice board for 15 days and, if no one has objected, the application will be definitively accepted.

In addition to an annual fee, 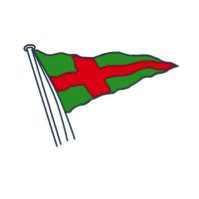 the new member must pay an additional fee to confirm his entry. At this point, the new member has not only access right to all the facilities of the club but, above all, he is allowed to raise the club flag on his own boat.

When, in March 1903, Adriaco’s pennant was put before the Austrian Imperial Royal Commissionner, the latter did not approve it because he had noticed, or someone told him, that a red cross on a green field put against the white background of the sails would have formed the Italian flag. However, the thirteen founding members didn’t give up and imposed their own choice and, today, the same pennant still flies on members’ boats and the head office.

Hearing the news, the House of Savoy appreciated the gesture so much that, in 1923, the club was renamed Royal Yacht Club Adriaco and could enjoy the full support of His Majesty the King.

The club is a fragment of the history of Trieste if we consider that, when World War I broke out, many irredentists found refuge in the hidden rooms of Adriaco’s floating headquarters before fleeing in Italy by sea and fighting against Austria. The refuge was the third headquarters since the club was founded and consisted of a floating pontoon that, launched in 1912 by the shipyards of Muggia, had replaced an old sailing cargo vessel used as head office one year after the foundation.

founding members had gathered in some offices made available by a partner within Hotel de la Ville where, many years later, Banca Popolare di Novara established its registered office. The today’s red-brick building in its typical liberty style was inaugurated in 1925 when the Royal Yacht Club Adriaco had become a lively important nautical center.

Contemporaneous documents confirm that, in 1924, the club had 444 members, 2 steam yachts, 1 motor yacht, 14 auxiliary yachts, 28 powerboats and 80 sailing yachts. One year later, members had become 627 and the social fleet had 116 boats. 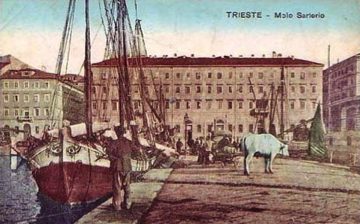 Glad and sad pages as when, in 1945, the members were forced to take all furniture away to save it from bombs and any explosion risks after dock Sartorio had been mined. In those years, the seat of the club was requisitioned by the Bristish Navy and only some years later a captain of the Royal Navy attenuated the seizure of the club.

In 1948, the Adriaco had 1,000 members and 145 boats that, in the immediate post-war era, still sailed along the mined areas but managed to beat, during a hard exciting race, the English gentlemen who occupied the Free Land of Trieste.

Today, this parade of boats, docked and exposed in front of the entrance of the club, is only a memory. Unfortunately, two of them have recently passed away: Carlo Sciarrelli’s “Bat”, a small 1889-built English yacht and the Pecorari Family’s Maris Stella, designed in 1904 to be, under the name of Elly, the school-boat of the cadets of the Austro-Hungarian Navy which subsequently became Italian prey during World War I.

Every time I could, I gladly violated the rules of this club and I entered its gates to admire the stern of Ervin’s Kingfisher or the sleek lines of the Auriga. When the bar was open, I even exaggerated and I had a coffee with the famous ghosts of that glorious seat.

The seat of Yacht Club Adriaco, with the parade of the ladies of the sea, is worth more a transgression!

Yacht Digest: the new face of the most widely read browsable magazine